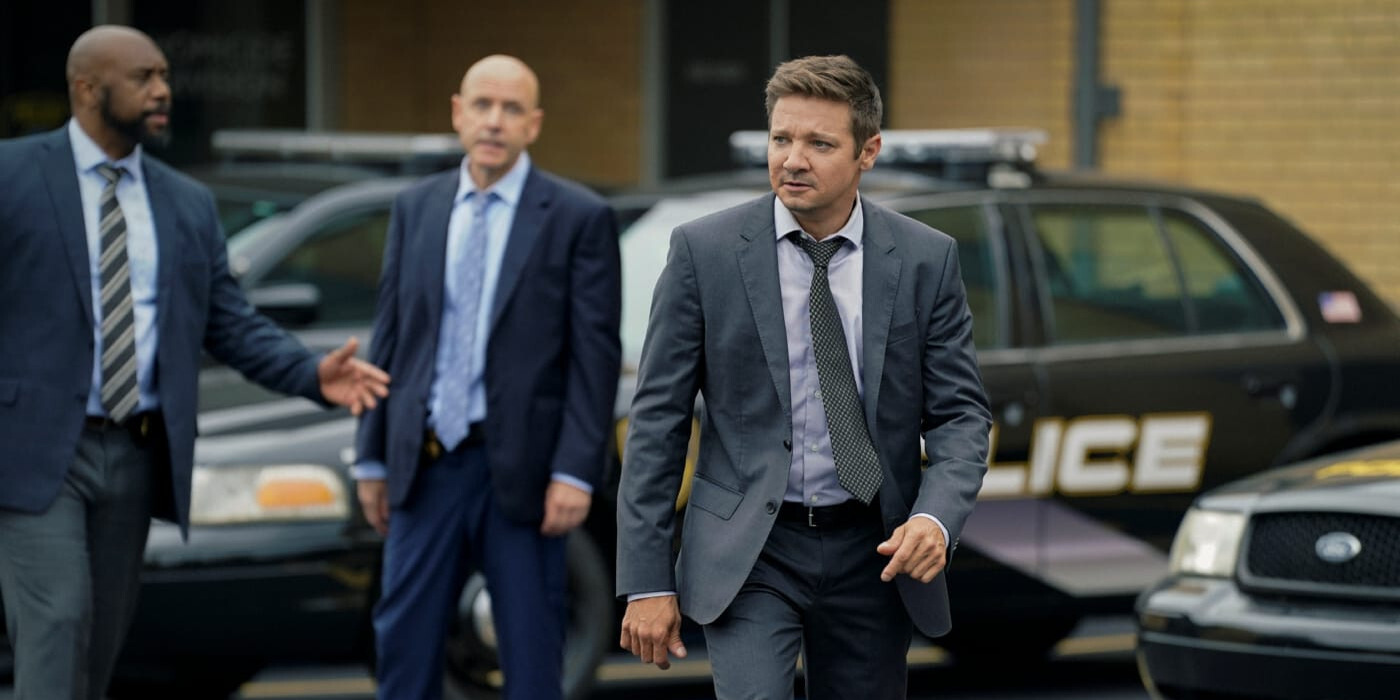 ‘Mayor of Kingstown‘ follows the McLusky brothers Mike (Jeremy Renner) and Kyle (Taylor Handley), who act as power brokers between the legal authorities and criminal gangs in the titular town. The crime drama’s first season culminates with the brothers dealing with a riot inside the prison with the gang leaders teaming up to take over the prison.

The second season premiere, titled ‘Never Missed a Pigeon,’ takes place a few weeks after the riot as Mike scrambles to deal with the aftermath of the harrowing events. However, when Mike realizes that one of his greatest foes might have escaped, he is forced to step up his efforts. If you are looking for insights into Mike’s actions, here is everything you need to know about the ending of ‘Mayor of Kingstown’ season 2 episode 1! SPOILERS AHEAD!

The first episode of season 2, titled ‘Never Missed a Pigeon,’ opens with Mike visiting Iris at his cabin, where the latter is in hiding. Mike takes Iris to a boat giving her a peaceful experience following the hardships the young girl has faced due to her association with the mob. Mike tells Iris that he will be selling the boat soon. However, Iris requests Mike to allow her to remain on the boat until he sells it, as the fresh air is good for her mental health. Elsewhere, Captain Kareem Moore has PTSD following the assault on him during the prison riots. Kareem’s wife struggles to calm him down as he experiences another episode of PTSD.

Meanwhile, inside the prison, the gang members run rampant following the demise of the gang leaders. The officers are trying to get a handle on the situation. However, the violence also continues outside the prison. One gang kills an enemy using a dog, and Stevie and Ian are alerted to the crime when the situation escalates. Simultaneously, Robert and his SWAT team conduct a raid and seize a drug consignment. An unsuspecting black teenager surprisingly emerges from the hideout. Although the boy poses no threat to the SWAT team, he is brutally gunned down.

Miriam visits the prison for her regular teaching sessions. However, she faces trouble teaching due to the presence of armed officers and the signs of the preceding violence in prison. On her way home, Miriam stops at a convenience store. However, she is mugged by a young petty thief. While Miriam is injured in the ensuing scuffle, she allows the thief to run away with the cash from her wallet. Mike visits Bunny and talks with him about restoring peace and order to the prison following the demise of the gang leaders. However, Bunny is not interested in the power struggle and focuses on protecting his drug business.

Meanwhile, Kareem attends an evaluation for returning to active duty. However, the doctor is concerned about his mental well-being and believes that the officer is hiding a sexual assault out of shame. However, when Kareem reassures the doctor that he merely wants his job back, he is cleared for duty. Nonetheless, after returning to prison, Kareem brutally beats down a group of prison inmates as revenge for the assault on him. Mike meets Stevie and Ian and learns of the criminal activities taking place outside the prison in the absence of the leaders.

In Benton Harbor, Kyle has a spat with his new boss following their team’s misjudgment of an intel leading to the raid on a boat carrying maple syrup. Kyle is displeased with the tactical incompetence of his new team. Elsewhere, Kyle realizes that the prison records following the riots do not have information on his nemesis, Milo Sunter. As a result, Mike believes that Milo may have escaped from the prison during the riot and resolves to track him down.

Mayor of Kingstown Season 2 Episode 1 Ending: Why Did Mike Send Iris Away?

In the episode, Mike realizes that he has failed to keep tabs on Milo Sunter, the most notorious criminal locked inside the prison. The first season’s finale depicts Milo escaping from prison using a correctional officer’s uniform following the riot. At present, several authorities believe Milo might have died in the firing by the National Guard while reclaiming the prison. However, due to the overwhelming number of causalities in jail, the authorities are having difficulty identifying the deceased. As a result, no one can say for sure whether Milo is dead or alive.

Consequently, Mike confronts the possibility that Milo is alive and could pose a threat to Iris, given their complex past. Therefore, he calls the FBI to take Iris to a safe house. While Mike sends Irish away, he cannot contact or accompany her to the location. Irish later learns that Mike is forced to send her away because Milo has escaped the prison. Eventually, Iris forces the FBI Agents to set her free, and she visits Mike at his office. Mike admits that he fears Milo is out in the open and he will be unable to protect Iris if he comes after her.

The episode ends with Iris asking Mike if he truly believes that Milo has escaped, and Mike responds affirmatively. Milo is responsible for some of the most challenging situations Mike has had to face in his tenure as the Mayor. As a result, the criminal walking in the open could jeopardize Mike’s authority in Kingstown. With the power vacuum in the criminal underworld of the town, the opportunity is ripe for Milo to take down Mike and establish himself as the leader of the gangs.