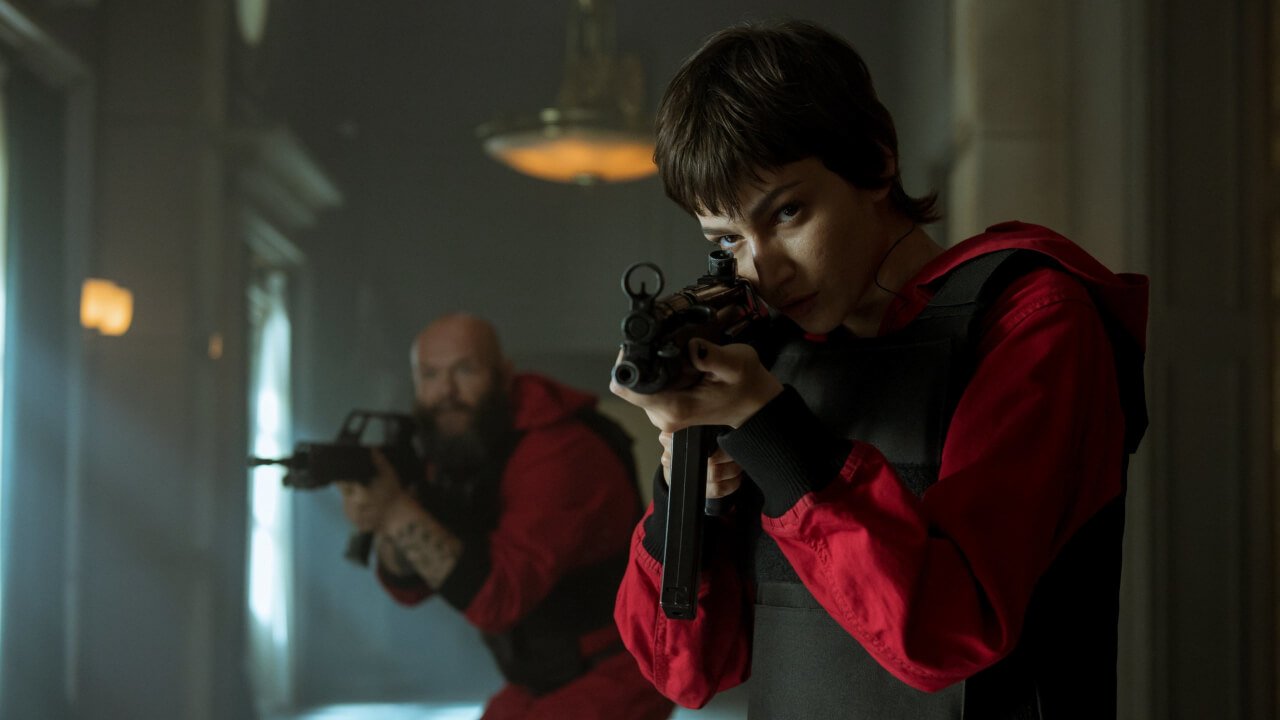 Half-way through this season, ‘Money Heist’ has reached the mark where the robbers are facing a threat unlike any they have tackled before. The cops had always been against them, but there was never an imminent danger to their lives as it is now. The Professor needs to act quickly, and he needs to strike hard. Every second he wastes, the team risks losing one of them.

In the flashback, we find Berlin canvassing the Bank of Spain to find out the loopholes as well as the strengths of the security team. It becomes clear to him that if they do go forward with the heist, they will have to eliminate Gandía. At that time, the Professor doesn’t share his views because he does not believe in unnecessary bloodshed. In the present, however, he is forced to consider the option.

Palermo’s wish to create chaos leads to Gandía running free in the Bank. He proves to be their worst nightmare, just as Berlin had predicted. Because it was under Rio’s watch that he escaped, everyone starts suspecting his motives. The Professor tries to find a way to turn the situation in their favor, on the outside, at least. Sierra wonders why Lisbon backed out of the deal seconds before she was ready to make that call. Their conversation leads to a revelation about the cop’s past.

Every heroic story needs a worthy villain. In the previous heist, the team didn’t have any formidable enemy, not the one who was out to kill all of them. In this heist, they were first pitted against Alicia Sierra, who displayed no sense of mercy for them. She was ready to bend the rules if that’s what it would take to bring them down.

In this episode, we find a flicker of emotion in her through her backstory. It also explains why she is so singularly focused on defeating the Professor. Despite her being the enemy, we didn’t have a reason to hate her. Her incredible flair towards the job made this heist more exciting than the last one. The same can be said about Gandía. Even though we know that he is out to kill all our favorite characters, and he will, perhaps, kill at least one of them, we don’t hate him for it.

Arturo, on the other hand, is an entirely different matter. He is not someone to be afraid of. He has created trouble, time and again, but in the end, he is just a coward and a fool. He is not motivated the way Sierra and Gandía are, nor does he share their expertise. He tries to be a hero, but that only makes him appear all the vainer. Since the moment he first showed up in the series, he has been nothing but despicable. If we needed any more reason to hate him, we got it this time around. He is earning every ounce of our hatred.

‘Pasodoble’ lays the ground for the fight that will define the rest of the season. Sierra’s charm has been waning, and if things go according to the Professor’s plan, she will probably be out of the picture very soon. Another worthy adversary is put forward to replace her ferocity. There is going to be some bloodshed, and Gandía might strike a blow that the team won’t be able to recover from. His familiarity with every corner of the Bank makes him very dangerous. While we wonder what his next move will be, we also pray that Arturo gets his due first.