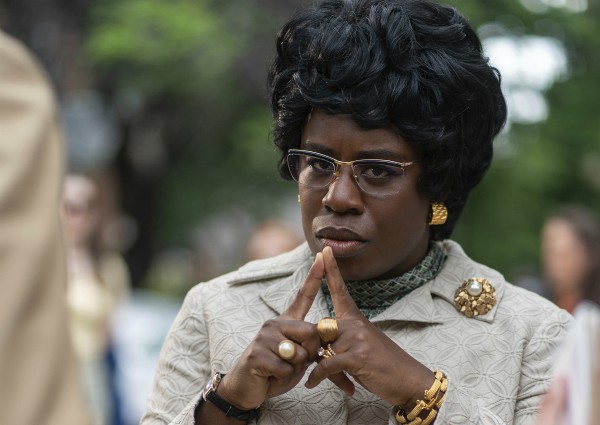 Hulu’s ‘Mrs. America’ provides a holistic look at the battle between second-wave feminists and Phyllis Schlafly regarding the ratification of the Equal Rights Amendment. However, the mini-series is not holistic just because it takes a look at both sides of the story. The third episode of ‘Mrs. America’ focuses on Shirley Chisholm, an African-American politician who ran for President. The series uses this opportunity to delve into the issue of race and its relation to the feminist movement, adding to the holistic nature of the show.

With 18 out of 38 states having ratified the ERA, Schlafly and her supporters prepare to take the fight to the national stage. They come up with the campaign title, “STOP ERA” with “STOP” standing for “Stop Taking Our Privileges.” They organize a launch in St. Louis, inviting supporters from all over the country.

Shirley gets lower votes than another Democrat candidate, McGovern, in the primary elections. Bella Abzug wants Shirley to endorse McGovern to keep the party united against Nixon and to avoid losing a political ally in McGovern. However, Shirley wants to use her delegates as leverage on the convention floor. Gloria and Betty support Shirley.

On the other hand, at the national launch of the STOP ERA campaign, Schlafly cuts a woman’s speech short as it is racist. She tells her friend, Alice, to confront the woman later. However, the woman feels offended. She decides to leave with a few of her friends, announcing that they would fight the ERA on their own. Schlafly stops them by promising to make them lead the campaign from their respective states and by implying that Alice was the one that had pointed out the racism, not her. Moreover, she urges them to adopt a uniform rhetoric.

Gloria and Bella go to McGovern’s suite. An official representing McGovern convinces Gloria to get McGovern a hundred more female votes that he needs to win. In return, he promises to push McGovern to choose a female running mate. Moreover, they make a deal wherein McGovern will stay neutral when it comes to abortion while Gloria promises not to use radical, feminist lingo just before the vote.

Chisholm starts to lose her delegates and decides to release them. Just before the vote, McGovern’s man (the one that made a deal with Gloria) changes his commitment. McGovern’s supporters cease being neutral and reinstate their opposition to abortion.

‘Mrs. America’ has progressively become more engaging over the course of the first three episodes. It has also become more politically complex, depicting the subtleties of the ERA battle. The third episode is extremely political in nature. A lot happens throughout the episode. Probably too much. But the central conflict remains taut.

The most compelling characteristic of ‘Shirley’ is how well it portrays the challenges of American politics for those with radical views. It manages to successfully depict how the country’s political system is a well-oiled machine, in favor of the white male. Race is an integral theme for the third episode of ‘Mrs. America.’

This is where viewers observe the first few hints of the series attempting to humanize political figures like Schlafly. Schlafly, although conservative, is depicted to have a problem with identifying as a white nationalist. Even if she does so for mostly political reasons, the portrayal is as important as that of Shirley’s struggle to be the first, female, African-American President. It sheds light on how race somehow seeps into each and every debate in the United States. Moreover, this ensures that Schafly is not unnecessarily demonized.

On the other hand, there is the character of Shirley Chisholm, who is the focus of the episode. It must be mentioned here that Uzo Aduba has played the role of Chisholm seamlessly. It is a considerable change for the actor since viewers are used to seeing her play a mentally challenged inmate on ‘Orange Is the New Black.’ Yet, Aduba manages to shed that image, in favor of a strong, sophisticated politician.

One area where the episode can be criticized is its exposition. While the premise of the episode is certainly complex, the episode doesn’t really make for easy viewing. As a non-American, I did find it occasionally tough to follow the political complexities depicted. While making things easy to digest might seem less artistic, such a practice is necessary to ensure that the majority understands the intended message. Of course, this opens up the debate of high art versus low art, which does not have one correct answer.