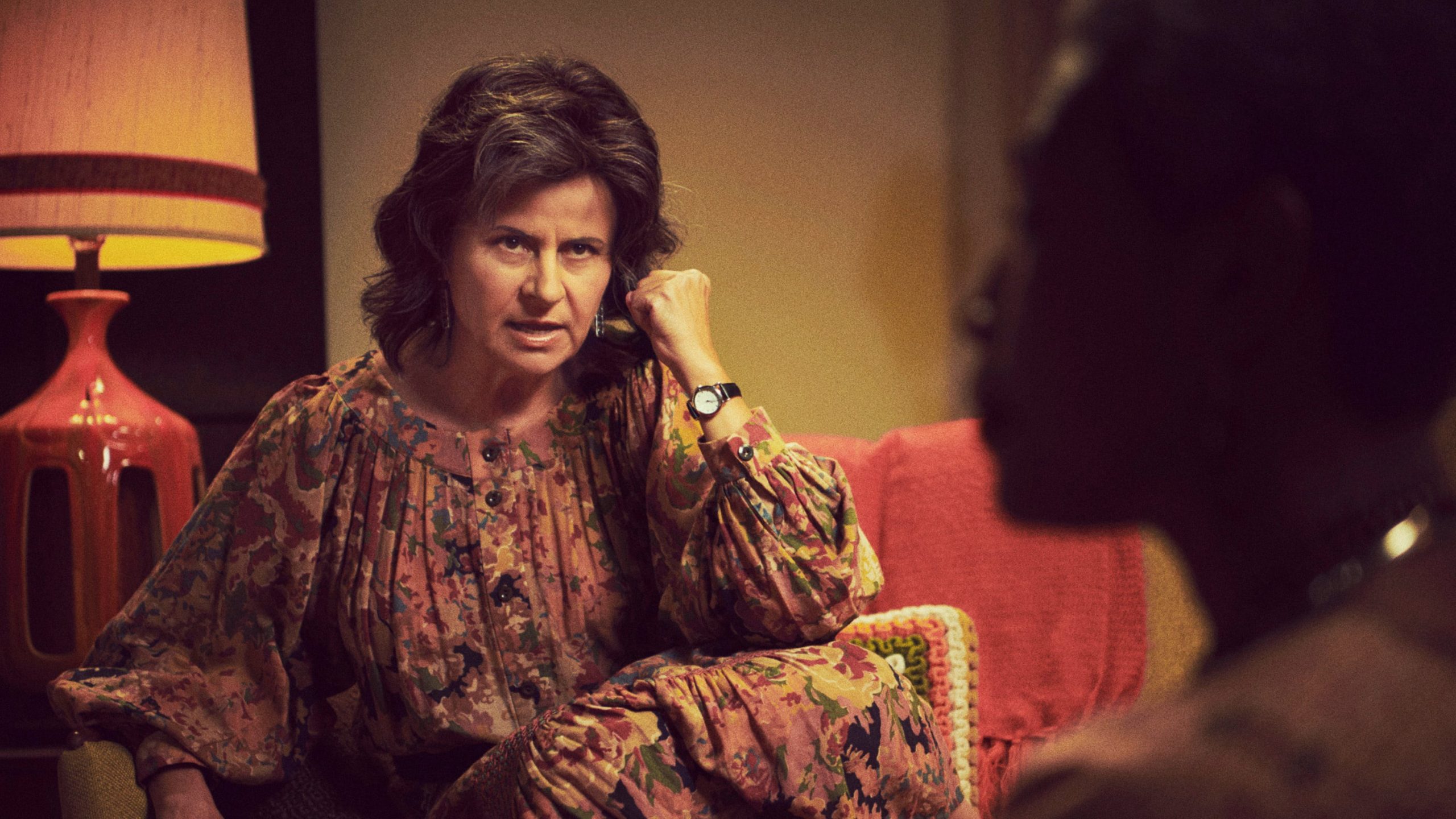 ‘Mrs. America‘ is a Hulu mini-series that takes a comprehensive look at the second feminist wave and the fight to get the Equal Rights Amendment Ratified. The series presents its historical story from all perspectives, displaying its characters as imperfect humans rather than carriers of an idealistic discourse. By doing so, the show lets viewers make their own judgments rather than spoon-feeding them. Each episode of ‘Mrs. America’ revolves around a different woman involved in the ERA battle. The fourth episode focuses on Betty Friedan, who is often referred to as the “Mother of Feminism.”

The episode begins in January of 1973 with the announcement of the Roe vs. Wade decision made by the Supreme Court, protecting a woman’s right to choose to get an abortion without much governmental restriction. Phyllis thinks that she is losing.

On the other hand, Betty tells a friend that she feels bad about criticizing Bella and Gloria in the press. At a gathering of the feminists group, Betty tells the other women that she found out that Schlafly is a member of the John Birch Society. Betty thinks that she should take Phyllis down. However, Gloria thinks that it is better to avoid a catfight and give Schlafly more attention from the press.

However, Betty tells the press that she thinks that Schlafly has ties with the Ku Klux Klan. Schlafly tells her supporters that Betty’s criticism is a good thing since it gives them more publicity. On the other hand, Margaret, one of Gloria’s employees, brings up tokenism as a possible topic of discussion. However, the other women do not understand what she is trying to say about a non-monolithic African-American experience. Gloria asks Margaret if she feels tokenism exists in her organization (Ms. magazine).

Screw magazine publishes a derogatory cartoon of a nude Gloria. There are various penises drawn around it, and the caption reads “pin the cock on the feminist.” 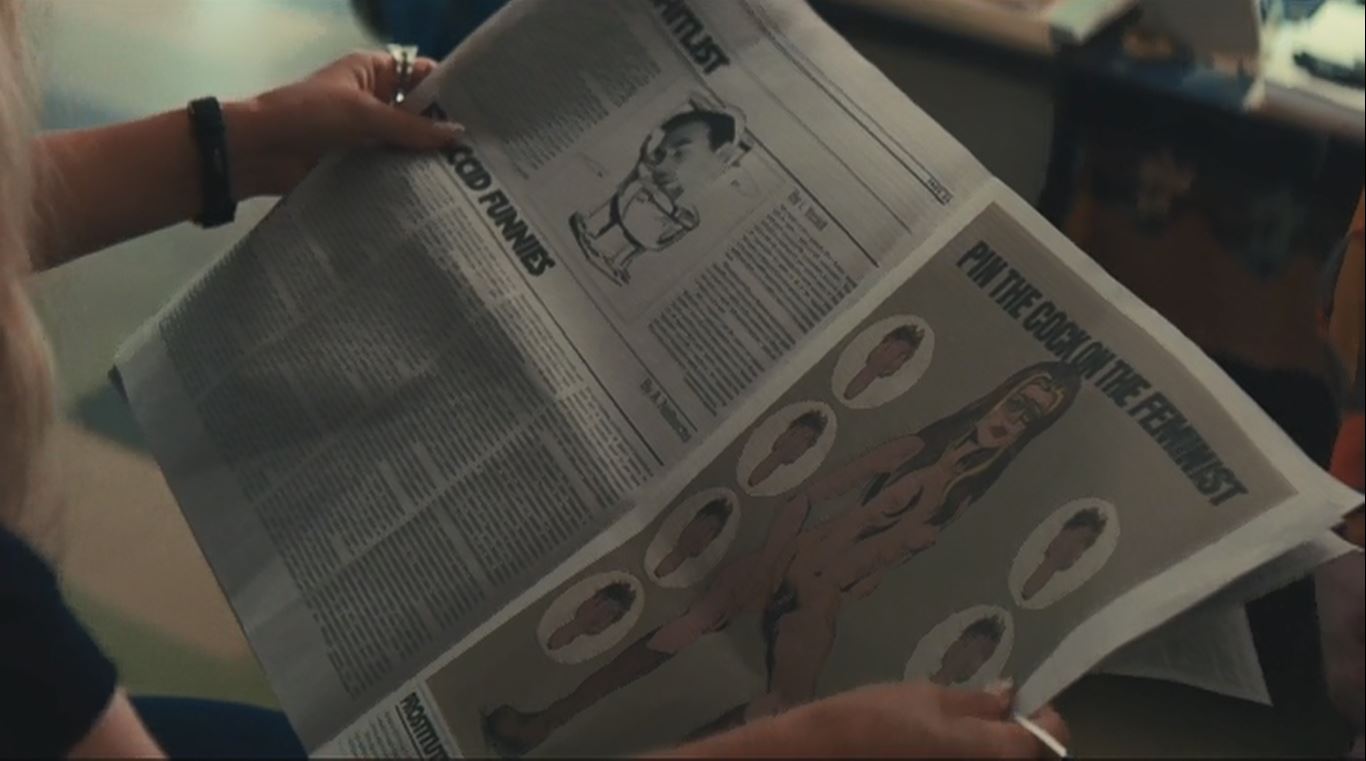 Schlafly prepares for a scheduled televised debate against Betty with her husband. Schlafly’s husband brings up her mother having to work two jobs to support her (Schlafly), in order to prepare his wife for the worst. Later, Schlafly finds out that her daughter is scared of swimming. So, she forces her daughter to jump into the pool with her.

Margaret is at a gathering of black feminists, and the women mull over aligning with white feminists. On the other hand, Betty seems to be winning the argument against Schlafly. However, Schlafly takes a dig at Betty’s divorce, riling Betty up. Betty ends up calling Schlafly a witch that needs to be burnt.

Margaret and her “friends” decide to start a National Black Feminists Organization. Meanwhile, Gloria gets a card from Al Goldstein that says, “Eat It.” Gloria calls Betty and tells her that her book (Betty’s) changed her (Gloria’s) life.

‘Mrs. America seems to be on a persistent incline, with each successive episode feeling better and more focused than the last. The fourth episode makes viewers empathize with Betty, a character who is depicted to be…”a force of nature.” The episode displays why the mother of feminism possessed the fiery attitude that she did. However, the fact that the episode also shows Friedan’s flaws makes it better.

For instance, the episode shows how Betty had a disdain for her ex-husband’s second wife. Moreover, the episode also shows how some of Betty’s own views were conservative. However, Betty gets over her dislike for her ex-husband’s second wife. Furthermore, the conservative views that Betty is shown having (like her apparent homophobia) highlights the progression of the feminist movement quite well. Friedan, after all, was a product of her time like all of us are. The notion that someone might be “ahead of their times” is actually quite flawed.

Apart from that, the fourth episode also shows how racial discourse seeped into the feminist discourse, and that is quite an important topic. This is already seen in the third episode, which revolves around Chisholm’s failed presidential run. However, an assertion of a separate black feminist movement is seen for the first time in this episode and highlights the misunderstanding of the African-American experience by several Caucasian feminists, including Gloria. This is yet another indication of the multi-faceted outlook of ‘Mrs. America, ‘ which has proven to be its biggest strength.