My Octopus Teacher’s Craig Foster: Everything We Know 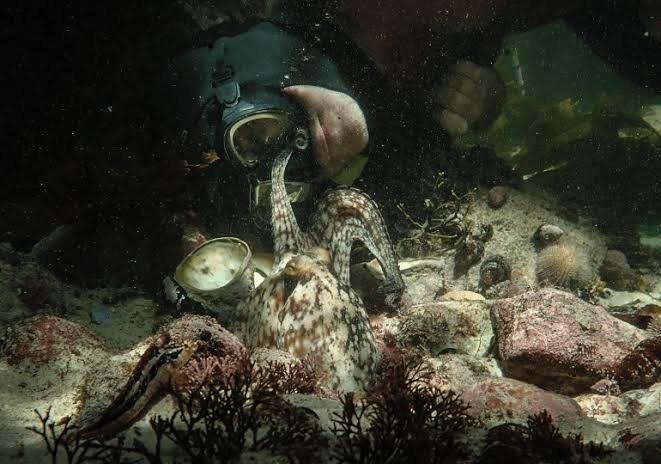 Craig Foster plays a supporting role in the recently-released Netflix documentary ‘My Octopus Teacher.’ We say supporting role because the starring role in this documentary has undisputedly been clinched by the titular octopus, Superstar. ‘My Octopus Teacher’ chronicles the profound and life-changing nature of the friendship forged between Foster and Superstar. In the documentary, Foster slowly but surely cultivates a bond with Superstar, along the way learning more than he could in a lifetime.

Where is Craig Foster from?

Foster’s lifelong tryst with marine life began soon after he was born. In a way, his home has always been the ocean. Born in South Africa, a three-day-old Foster was brought home to a bungalow within spitting distance of the ocean. In what makes for a fitting metaphor, he was baptized in the icy-cold water of the kelp forest. He spent his childhood scouring the coastline for crabs, rockfish, and antiquities. Stormy nights would bring the waves to his doorstep. His first dive was at the tender age of three, soon after which Foster and the ocean were inseparable.

What Does Craig Foster Do?

As an adult, Foster felt compelled to explore in depth his and humanity’s connections with nature. Unable to find the right mentorship and guidance in South Africa’s False Bay, he took off to the Kalahari. He began to learn and master the art of wilderness survival from the San bushmen, the native peoples of the Kalahari. For years, Foster immersed himself in learning how to track animals among the wild. Of that experience came an acclaimed documentary film, entitled ‘The Great Dance: A Hunter’s Story’. In natural history filmmaking, Foster found his calling.

Foster spent years pushing the physical limits of storytelling. This gave birth to many a scintillating documentary, including ‘My Hunter’s Heart’, ‘Wild Walk’, ‘The Animal Communicator’, ‘Touching the Dragon’, among others. During his escapades, he came eye to eye and matched steps with the most dangerous predators in the world. From riding tiger sharks to swimming among great white sharks, Foster did it all.

But soon, after years of living life to its dangerous fullest, Foster began to sense a burnout coming. Struck by depression and exhaustion, he decided a reawakening was in order. In 2010, Foster felt the ocean beckoning and, convinced of the healing powers of the water, he made himself a promise: to swim the expanse of the sea every single day. If he missed a day, he’d dive twice the next day. Foster also ensured he did so without the handy use of a wetsuit, so as not to disturb the ecological peace of the area.

A couple of years into his daily diving custom, serendipity brought Foster and Superstar together. Superstar would help Foster emerge triumphant from his battle with depression and lead to the conception of ‘My Octopus Teacher’, which would go on to be produced by Foster’s newest outfit, the Sea Change Project.

The Sea Change Project (SCP) is a token of love from Foster to the sea. Co-founded by Foster and Ross Frylinck and spearheaded by a community of marine-lovers, the ground-breaking initiative is predicated on increasing awareness towards the environmental significance of South Africa’s kelp forest. SCP does this through various mediums: film, literature, and research. Under its umbrella of initiatives, Sea Change also holds visually-rich exhibitions, too; some have been attended by 1 million people.

Together with SCP’s research efforts, Foster has also discovered seven new marine species, one of which has been named after him. Foster began to employ the tracking modus-operandi of the San bushmen to track down marine life underwater. To this end, Foster made use of every conceivable trick in the book, from observing changes in the texture of the sand to identifying egg casings.

Where is Craig Foster now?

Foster now lives with his wife, Swati Thiyagarajan, on the pristine hillside overlooking False Bay. Thiyagarajan, who hails from India, has made a name for herself with her environmental activism and reportage. Her work as Environmental Editor at NDTV has been internationally lauded. She is part of the core team at Sea Change and has contributed in good measure to ‘My Octopus Teacher’, among other projects.

Foster also has a son, Tom, with his ex-wife. In ‘My Octopus Teacher’, Foster spilled that his soul-searching was also the result of wanting to foster a better relationship with Tom. The making of the film itself served as a fitting binding agent for the two as Tom assisted with the development of the film in more ways than one. He composed two soulful tracks and created haunting soundscapes for uncanny portions of the film.