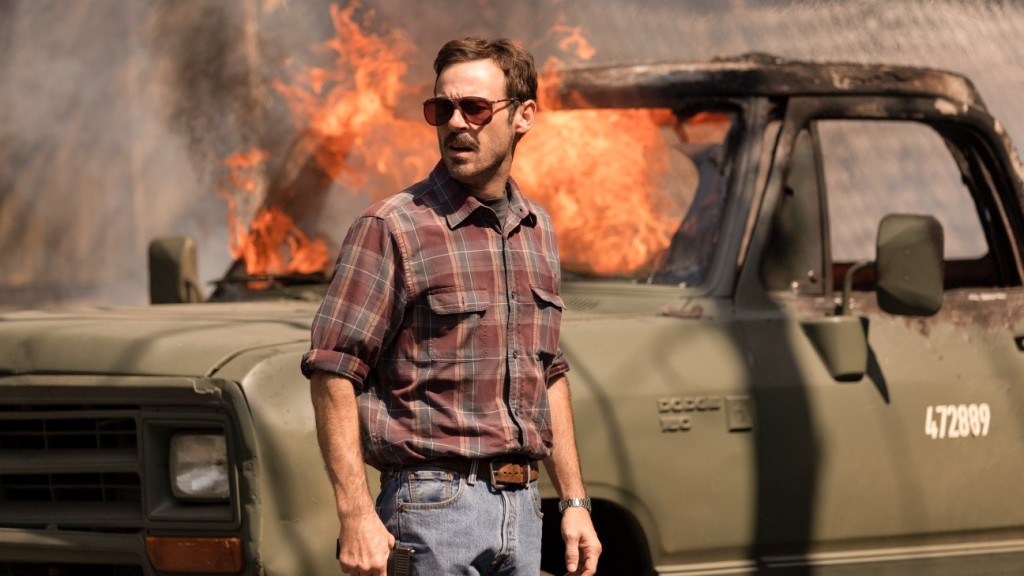 Like its parent series, ‘Narcos: Mexico’ tiptoes the fine line between humanizing the real-life cartel figures that make up a significant portion of its cast of characters and glorifying them. The third and final season of the show is appropriately nihilistic as it explores the early consequences of the War on Drugs. Following the downfall of Miguel Ángel Félix Gallardo (Diego Luna), the erstwhile Guadalajara Cartel has split into multiple factions, with each emerging as its own cartel.

Soon, war breaks out between the Sinaloa Cartel under the leadership of Chapo (Alejandro Edda), Palma (Gorka Lasaosa), Azul (Fermín Martínez), and the Tijuana Cartel controled by the Arellano family. While they fight and destroy each other, Amado (José María Yazpik) turns the Juárez Cartel into one of the most powerful drug-trafficking organizations in the world. Walt (Scoot McNairy), the DEA, and the rest of the law enforcement slowly start to grasp that they can never win this fight. Here is everything you need to know about the ending of ‘Narcos: Mexico’ season 3. SPOILERS AHEAD.

Félix’s words to Walt about what will happen in the Mexican drug trade after his incarceration prove to be terrifyingly prophetic. Initially, the relationship between the three newly-formed cartels is quite pleasant before things start to fall apart. Sinaloa has plenty of human resources, but as they don’t have a border area to access their customers, they have to pay taxes to Tijuana to move their drugs. Inevitably, a war breaks out between the two cartels, and the number of casualties starts to rise on both sides.

Away from this, after learning that Carlos Hank Gonzalez or El Professor, arguably the most powerful and influential man in Mexico, has decided to expand to Juárez, Amado kills his partner, Aguilar, and forms a professional relationship with Hank. A successful businessman and politician, Hank is the kingmaker of Mexico; he is the one that decides who will be the President of the country. By partnering with him, Amado ensures that the government forces will never accost his traffickers. Furthermore, he establishes a new infrastructure to move the drugs. It is so effective that even if the traffickers get caught on the other side of the borders, they can’t be traced back to Amado and his cartel.

Also, in Juárez, Victor Tapia (Luis Gerardo Méndez), a police officer, starts looking for a young girl named Teresa after her aunt tells him that she has gone missing. He discovers that the bodies of young women of similar age as Teresa have been turning up all over Juárez and starts to believe that this might be the work of a serial killer. In Tijuana, young, ambitious, and idealistic journalist Andrea Nuñez (Luisa Rubino) begins investigating the connection between Hank and the cartels.

In the season finale, Amado gives his drug empire to his brother, Vicente Carrillo Fuentes, before trying to escape to Chile and reunite with his girlfriend, Marta. He undergoes plastic surgery to alter his appearance but seemingly dies on the operating table. Chapo and Ismael “El Mayo” Zambada become the co-leaders of Sinaloa. Victor learns about the futility of his search. Exhausted and disillusioned, Walt learns to accept his own failure and that of the war on drugs. He meets up with Andrea and tells her about the role that he and the DEA in the torture and death of Alex Hodoyan, a dual citizen.

In the mid-credits scene, Marta walks from the Chilean beach toward the villa that Amado gave her. There are two glasses of wine on top of a piano, along with the toy plane that originally belonged to Amado’s late daughter. The implication here is that Amado is alive, and he has reunited with Marta.

Earlier, it is heavily hinted that he is the one who makes the anonymous call to tell the authorities about his location. When they get there, they learn that Amado has died due to complications from the surgery. The Mexican federal agents confirm his identity, and Amado’s body subsequently vanishes.

Sometime later, the two doctors who supposedly performed the surgery on him turn up dead, and everyone, including Walt and Jaime, comes to believe that this was an act of revenge. In reality, this was probably done to cover Amado’s tracks. Once more, he succeeds in doing something that almost no one before him has accomplished: he gets out of the business alive and free.

Yes, Ramón Arellano is dead. After learning that Mayo is in Mazatlán, he decides to go there to kill the latter. But on his way, he and two of his friends are ambushed by Sinaloa Cartel members dressed as police officers. Although Ramón realizes their real identity, he still gets shot in the ensuing gunfight and dies. Later, Mayo calls Enedina (Mayra Hermosillo) to tell her that her plan has failed and that her brother is dead.

Ramón and Enedina organized the hit without telling Benjamín, the de facto leader of the family, who had his reservations about such steps. But now, the war between the two cartels will only get worse, even if the show is ending at this point. The Mexican drug war will become even more bloody and violent.

What Happens to the Sinaloa Cartel?

In season 3, Azul is one of the casualties of the war between Sinaloa and Tijuana. In the season finale, Chapo moves Palma to a different prison and effectively gains control over the prison and the members of the cartel residing there. He and his new partner, Mayo, begin to make plans for the future. They know their fight with Tijuana is at a stalemate, and they still need a border area to transfer their drugs to the US. With Amado gone, they decide to make a move towards Juárez and open another front in the drug war.

Does Victor Find the Serial Killer? Is Victor Dead?

Yes, Victor eventually finds the serial killer and kills him. Afterward, he feels that a weight has been lifted off him. He goes back to his wife, happy with the fact that he has accomplished something. However, the following day, he discovers that the police have found a pit where dozens of women have been buried. He also learns that the women were killed by different murderers with different modus operandi.

Victor realizes that even though he has managed to remove one killer off the streets of Juárez, it will not make the situation any better for the women. Andrea’s voiceover reveals that women continue to vanish and die in Juárez even today, and no administration has been able to do anything about it.

Yes, Victor is dead. To get a DNA test done on a sample probably belonging to the serial killer, Victor becomes a DEA informant. He passes Jaime important information that leads to arrests and seizures of money and drugs. But Victor ends up getting the short end of the deal. Although Jaime keeps his promises to him, the results turn out to be inconclusive.

It is because of his tenacity and detective work that he tracks down the killer. But by then, the cartel has figured out that Victor is the informant and sends Rogelio to kill him. Even though Rogelio feels remorse for how things have turned out, he still pulls the trigger, killing his longtime partner and friend.