Netflix Review: ‘Airplane Mode’ is a Refreshing Take on Romance 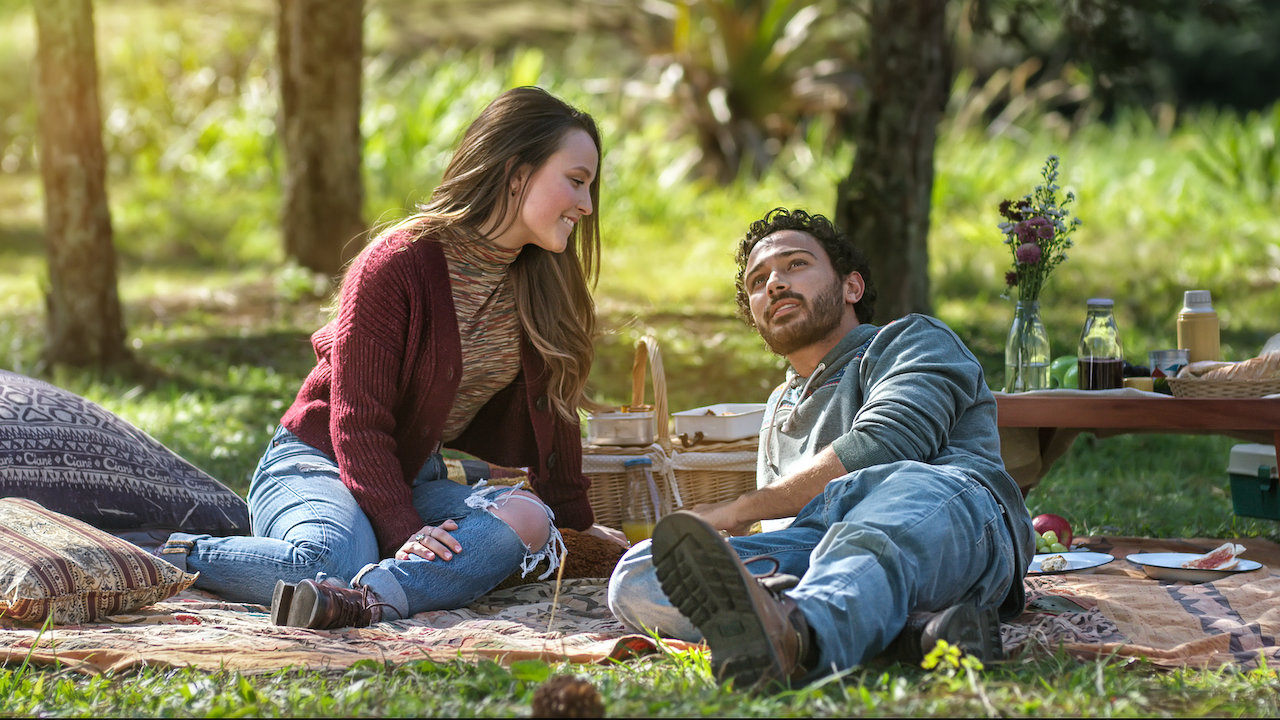 In an age where social media influencers dictate consumer choices, Netflix’s ‘Airplane Mode’ could not have arrived in a more timely manner. The film takes a predictable course of showing a girl’s transformation, as she gets in touch with her real self while doing away with the toxic bits of life.

However, what makes ‘Airplane Mode’ refreshing, is that the movie does not take itself too seriously, even while dealing with tough issues like social media addiction, and how we have lost a sense of reality due to social media immersion.

Directed by Cesar Rodrigues, the Brazilian original movie is a sweet addition to Netflix’s foreign-language content. The emotional and feel-good movie takes predictable turns but handles itself charmingly enough to keep viewers hooked.

‘Airplane Mode’ starts by giving us a look at Ana’s life. She is a typical influencer, who wakes up, takes an effort to put on makeup, and then goes back to bed to take a selfie saying she just woke up! Her parents have their own quirks, but it is quickly evident that they are concerned about Ana and her addiction to social media.

It seems that Ana is specifically addicted to Photogram (an obvious play on Instagram). Her posts receive thousands of likes within the minute and she is always on her phone, so much so, that she gets into road accidents twice on the same day. Ana’s status as an influencer allows her to work for a fashion brand called True Fashion.

The people behind the company portray corporate greed and how businesspeople will do anything to get an edge. They try and orchestrate aspects of Ana’s relationship with Gil, who also works for the same company. Ultimately, they get Gil to break up with Ana on a live stream, during their one month anniversary, just to sensationalize the launch of their upcoming clothesline.

A devastated Ana gets into a pretty serious accident on her way back. Her worried parents make the decision to send her on a digital detox. She is sent away to her grandfather’s place, where people don’t use the internet or even phones. Ana believes this is part of a court order, and her father isn’t completely on board either, because he is not on talking terms with Ana’s grandfather.

However, once she gets there, she begins to enjoy the rustic life and even falls in love. Ultimately, it unravels when she discovers that her parents lied about the court order, getting an actor to pose as an official. Meanwhile, True Fashion gets Ana’s best friend to have a supposed relationship with Gil, to promote their new fashion line.

Making matters worse, True Fashion’s boss also steals Ana’s ideas of clothes, which were inspired by her grandparents’ love story. A disgruntled Ana finally teams up with her countryside lover, her parents, and her grandfather. In an epic finale, she exposes True Fashion’s boss as a spiteful thief and regains control of her life.

‘Airplane Mode’ is definitely relatable to millennials, who are on their phones all the time, and might even idolize influencers. The movie has its moments of fun, especially in Ana’s interactions with her father, and her grandfather. That being said, ‘Airplane Mode’ also manages to pack in nuggets of wisdom.

True Fashion’s boss lets drop the fact that knowing oneself is the first step to self-loathing. While the tone of ‘Airplane Mode’ will never let you understand that serious things are being dealt with, the movie boldly tackles these issues. We understand why many of us create alter egos online. Ana also ends up complaining that people do not know the real her.

Moreover, we understand how fleeting social media fame is, as Ana is quickly replaced by another influencer, and she fears that nobody will remember her after she returns from her social media detox. It takes a lot of courage to tackle something as insidious and complex as the influence of social media in our lives. Luckily, ‘Airplane Mode’ does not lose itself in the seriousness of the premise.

The movie packs it in as a simple tale of redemption. Ana does not give up social media, but she does away with the toxicity of it. At the same time, the film draws parallels between country life, and city life, the pace between the two. It is a little cliched where the city girl falls for the country boy, but ‘Airplane Mode’ manages to escape being boring thanks to an impactful script.

Direction wise, Cesar Rodrigues does a good job, although the overhead shots of the winding roads get a little monotonous after a couple of times. As for the acting, the cast members put in their best effort, but some scenes feel a little unnatural and forced.

The best aspect of the movie is the themes it deals with and how it deals with them. We also get to see how parental concerns can force them to lie, and step into the same things they ask kids to avoid. The movie is also a testament to how it is not good to hold grudges.