Review: Can You Hear Me Is A Realistic Portrayal of Female Friendships 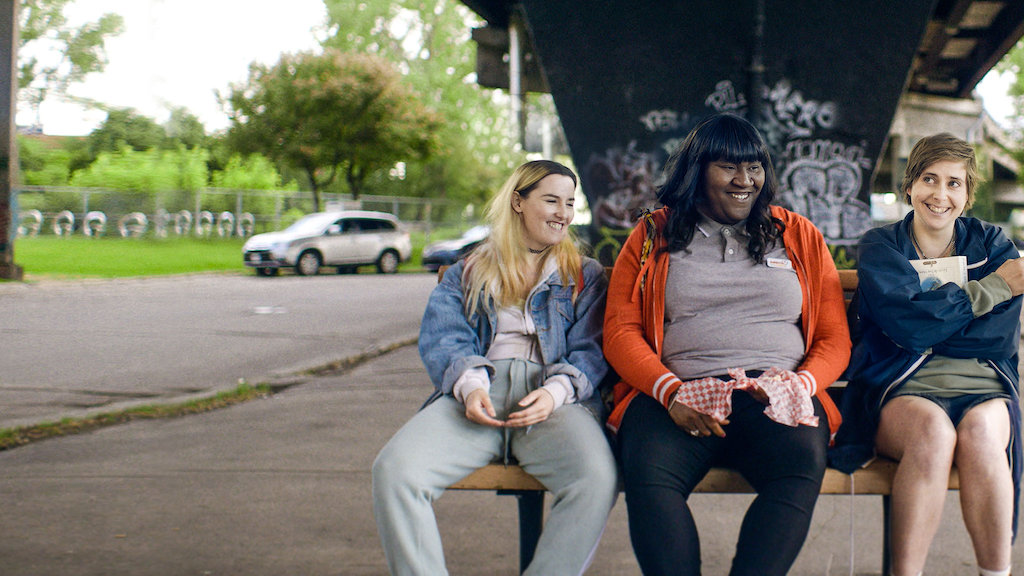 ‘Can You Hear Me’ is a French-language drama that focuses on the lives of three women, going through different forms of struggles. The show is a comedy, but the humour is mainly present there to balance out the darker elements of the story. In one scene, one character makes a joke about the miscarriage of her friend, and when she gets stared at, she says that making fun of it helps get over the tragedy. Her statement sums up the soul of the show.

If you want me to cut to the chase and simply tell you if it’s worth your time or not, then the answer is yes. The series definitely receives all your attention. It is refreshing, tragic, hilarious, and a realistic portrayal of female friendships and hardships. It is the story that you shouldn’t miss out on.

Can You Hear Me Recap

Ada, Caro, and Fabio are best friends who live in a not so well-off neighbourhood in Montreal. Apart from their monetary situation, they have several things in their lives that they could do without. Ada has anger issues and after a violent incident, she has to attend court-mandated therapy sessions. In addition to this, she also has an unhealthy habit of seeking sex in the oddest of places and getting favours in return for it, often in the form of money. She also has a difficult relationship with her mother, who is into some bad things herself.

Fabio has a beautiful voice and she is auditioning at different places to make herself heard. However, her sister’s addiction and recklessness have left Fab to take care of her daughter, Baby. She also has to look after her mother, and find a balance in her relationship with Jean-Michel, who her friends don’t approve of.

Caro is in a textbook toxic and abusive relationship. It has led something horrible to happen to her, but she doesn’t talk about it with her friends. She shuts herself in, and as time passes by, things get worse. While going through these individual struggles, the women find support in each other and spend their time making music and singing it on the streets or the subway.

Can You Hear Me Review

From its first episode itself, ‘Can You Hear Me’ makes it clear that it is not interested in engaging in impossible standards for women, nor will it build castles in the air with cheesy romantic sub-plots. In all of its ten episodes, it shows us just how flawed and imperfect these women are and, in doing so, it makes us understand them more. Unlike other shows, where we get angry with the characters when they do something stupid, this one makes us sympathise with its protagonists even if we don’t agree with their actions. In laying them bare to the audience, it makes them all the more acceptable and lovable.

The series adopts the tone of several shows about female characters and relationships that have started to establish a genre of their own. At times, there is something of Lena Dunham’s ‘Girls’ in it, and there are also times when it looks like a Canadian rendition of Phoebe Waller-Bridge’s ‘Fleabag’. With every episode, it digs deeper into the psyche of the three women who seem to be running in different directions, but always end up next to each other, no matter what they do.

Another great thing about it is that it never tries to force the humor out of a situation or a character. There is no unnecessary trope or trick. The characters behave just as any normal person would, and that is where several laugh-out-loud moments come out of. It indulges in dark humor and often uses the funny situations to set a foundation for the not-so-funny things in the future.

The show makes you smile, but it can also break your heart in the next moment. In this approach, it feels a lot like Josh Thomas’ ‘Please Like Me’, where the humor is always in sync with the tragedy. This tragicomic tone of ‘Can You Hear Me’ makes it an engaging watch. The ten-episodes breeze by you, and at the end, you are left wanting for more.

Read More: Can You Hear Me Filming Locations