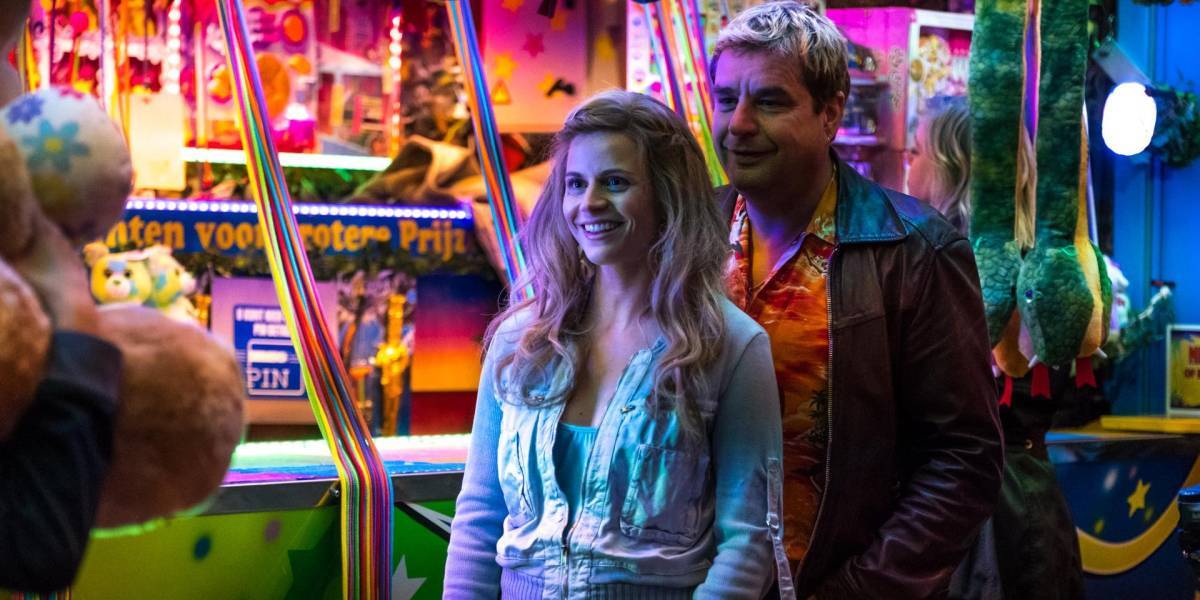 After co-directing the hit Netflix show ‘Undercover,’ Belgian director Cecilia Verheyden comes with a fresh and nuanced spin at the tried and tested story of a loner hitman falling in love and getting into trouble in the gangster crime film ‘Ferry.’ After the son of Ferry’s boss gets fatally injured in a robbing incident, ruthless hitman Ferry goes on a killing rampage, but a sudden exposition to love and family makes Ferry reconsider his decisions.

Driven by an expressive performance by Frank Lammers and beautifully filmed, the story reveals how Ferry Bouman becomes the “king of the camp.” In the finality of events, there are a lot of dead people on the list, but our protagonist survives to continue the gang operations. However, there remain a few doubts that need to be cleared. If you can’t fathom the finality of events and feel that things don’t add up, fret not since we are here to dissect them. SPOILERS AHEAD.

As a child, Ferry hides in the bush while his abusive father looks for him and beats his mother. But Ferry has a gun, so he comes out and threatens him. The next scene opens with the introduction of modern-day Ferry, who is now in a gang and working for a guy called Brink. His other associates are Olaf, Robert, Rico, and Brinks’ son Mattaijs. Brink is unhappy with his son having debts to other people, and after scolding his son Mattaijs, they watch a football match while someone knocks on the door.

Ferry opens the door, and a group of three armed robbers holds them at gunpoint. While they are looting the money, Brink tries to reach for the gun, but Mattaijs is shot. While he goes into a coma, Ferry goes south towards his home region in Brabant to get revenge on behalf of Brink. He meets his sister, Claudia, and John, Claudia’s husband and an old friend of Ferry. Claudia is suffering from cancer, and her mood swings cause Ferry to have an outburst and leave.

But in the meantime, John identifies a guy named Jason Kant from the footage of the robbery. After learning about his whereabouts, Ferry heads towards Camping Zonnedauw to hunt Jason down. He rents a caravan hoping to meet Jason Kant and goes out to explore the nearby fair. There, he sees a man fighting a woman, and Ferry reaches out to save the woman by giving the guy a beating. The woman is Danielle, another resident in the camp. Ferry gives his introduction and leaves.

Kant mostly lives at his girlfriend’s place, so Ferry stages a burglary at Kant’s chalet to make him come out. After throwing Kant off of a cliff, Ferry finds out about a guy named Davy. Ferry tries to make himself familiar to Danielle and go rave with her. He goes to meet Davy, who divulges that the robbery was, in fact, Brink’s son Mattaijs’ doing. Ferry also comes to know that the third guy from the armed robbers’ group, Lars van Marken, is the brother of Danielle.

After procuring the information about the third man called Lars van Marken, Ferry eliminates him and goes back to Danielle’s place. There he meets Danielle’s brother, who is dear to her. When the brother shows up, it is revealed that he is the third man in the group of robbers. After Lars leaves his sister’s home, Ferry follows him to a jungle, where Lars anticipates Ferry and strikes him to the ground. However, Ferry is quick to get back up and snatch the revolver from Lars’ hand. He reiterates the same lesson taught to him by his father — “Don’t threaten someone if you can’t finish it” — and a shot of Ferry shows him pulling the trigger.

But we know later that Ferry does not kill Lars. After the encounter, he bawls Danielle out and leaves the place, telling her that his business there is finished. But in the next scene, we see a teary-eyed Ferry lashing out at the car by the road. In flashback, we see that Ferry shot the ground and lets Lars go. Lars is the brother of the nascent love of Ferry’s life, and his conscience does not let him do the deed. Moreover, Davy has also divulged the news that Mattaijs was behind the robbery, and Ferry thinks that taking Lars’ life is redundant.

Is Ferry Killed by His Gang Members?

Ferry returns to Amsterdam after parting with Lars and Danielle. In the meantime, Rico has managed the drug business of Brink. Fearing that the gang would find out that he has cheated on them, Ferry does not talk much and stays tense in the group, while other members from the gang bully him. Afterward, when Ferry reunites with Danielle by the canal, their meeting is interrupted by Rico, who gets to know that Danielle’s surname is “van Marken.”

Rico forces Ferry to say goodbye to Danielle and take him to Brink. After attempting to lie about the murder, Ferry confesses that he has left Lars alive. He also gives out the fact that Mattaijs was the main culprit behind the robbery. Mattaijs was in a lot of debt, and it is quite likely that he stages the robbery since his father refused to help. But Brink does not believe that his son did it, especially now that he is dead. With both Devy and Mattaijs dead, there is no way to connect the incident back to Mattaijs.

Brink thinks that Ferry is manipulating him, and he orders his thugs to suffocate him to death while he sends his men after Danielle. But Ferry is quicker than the other thugs, and in no time, he turns the situation in his favor. After killing the other thugs and Rico, he manages to injure Brink. Brink tries to escape, but Ferry follows him to the lawn. When a wounded Brink shames him for being a southerner and curses at him, Ferry fires all the bullets, killing him in effect.

Is Danielle Safe? Do She and Ferry Hit it Off?

Brink sends a man to kill Danielle, but Ferry follows the man to a crossing and eliminates him. Then he goes to meet Danielle, who returns from a hen party in the nick of time. The camera closes in on the pair, and they kiss. In an epilogue, Danielle and Ferry escape Amsterdam and go to meet Ferry’s sister, who has not died of cancer yet. She seems to be in better health, and her mood swings seem to be in control. John goes to make coffee while Claudia welcomes Danielle to the family. We are of the impression that Ferry and Danielle become engaged and lead a married life together, especially since Ferry has always seemed like a family man. His and Danielle’s future is explored in greater detail in ‘Undercover.’

Does Ferry Get Away With the Murders?

The film is a prequel to hit Dutch crime drama show ‘Undercover,’ and this show deals with the future of Ferry, who ostensibly becomes a drug mafia kingpin. But the kernel of Ferry’s ascendance to a future as a mafia boss is already implanted in the film. Ferry kills all the other members of the gang. Although, before being killed at the hands of Ferry, Brink says that Ferry will not survive without the gang, but that is Brink’s delusion, as is the innocence of Mattaijs. In the final moment, Ferry gets the information from Danielle that her brother produces ecstasy pills. This information opens up new avenues for Ferry, and the suggestion is that he teams up with Lars to keep the drug business going.