Never Have I Ever Season 2 Ending, Explained

Netflix’s coming-of-age comedy-drama series ‘Never Have I Ever’ follows Devi Vishwakumar as she navigates the turbulent world of high school after the untimely, and very public, death of her father at a school music recital. Being one of the popular kids is all that Devi and (to some extent) her wide-eyed friends want, but the task proves to be slightly more complicated than the headstrong American-Indian teen says it will be at the beginning of her sophomore year.

It’s not all bad, and Devi manages to lock lips with the high school dreamboat Paxton and, surprisingly, even with her pompous rival Ben. It looks like the big school dance went off pretty well, but will things remain so idyllic? Not if Devi can help it, to say nothing of her cousin Kamala who seems to be channeling an “inner Devi” of her own. Let’s take a closer look at ‘Never Have I Ever’ season 2 and see where we left our spunky heroine. SPOILERS AHEAD.

Never Have I Ever Season 2 Recap

Season 2 opens with Devi’s mother Nalini catching her daughter kissing Ben soon after an especially emotional ceremony where they disperse Devi’s father’s ashes into the sea. Incensed and in true form, Nalini asks the teenager if she’ll also have sex on top of her mother’s grave when she dies. Devi blames the kiss on being emotionally distraught but, deep inside, is giddy with joy at the prospect of having kissed Ben. Another surprise awaits as she finds Paxton waiting for her when she gets home. Devi, who’s soon about to move to India because her mother wants to be closer to family, decides to juggle the two boys before leaving the US. She expects to be out of the country before either of them realizes they’re being two-timed.

Meanwhile, her cousin Kamala is excited to get a research post under her idol but soon realizes that she’ll be reporting to his pompous and petty underling. Try as she might, she is excluded from the group by the other researchers for her apparent popularity and is even bullied in no small way. To make matters worse, her fiance, who is otherwise very understanding, tells Kamala to keep her head down and keep “playing the game.” Finally, the meek and polite Kamala gets some inspiration from her hot-headed younger cousin and puts her boss firmly in his place before walking out. A few days later, in a moment of realization and partly out of panic, she sneaks out of her proposal dinner and heads over to Devi’s school dance, where one of the teachers seems to be especially fond of her.

Soon enough, at a disastrous going away party thrown in her honor, both of Devi’s boyfriends find out about each other and walk out. Ben refuses to speak to her, and Paxton, though on speaking terms, refuses to acknowledge any semblance of a relationship between them. With her trip to India now canceled, a very frustrated Devi, in a fit of jealousy, unknowingly spreads a rumor about one of her classmates (Aneesa), which gets her suspended. To make matters worse, Devi finds out that her mother is having an affair with a colleague and thinks that she’s moving on from the death of her father too soon.

Never Have I Ever Season 2 Ending: Who is Devi’s Boyfriend?

As the school dance approaches, Devi is made jealous of Ben and Aneesa’s very public relationship while her own with Paxton seems non-existent. Her friends Fabiola and Eleanor also struggle with their love lives, with the former trying to balance her academic interests with her new girlfriend’s busy social activism schedule and the latter dealing with her egocentric child celebrity boyfriend. The high school dance doesn’t go quite like Devi pictured and is a far cry from the limo-riding, boyfriend-toting experience she expected it to be.

However, just as she’s leaving, Paxton shows up, having realized how much Devi has helped him in the past year. The two, for the first time, enter their schools as a couple and slow dance to a fast Kylie Minogue track (for which Devi threatens to murder the DJ). Ben, however, seems especially crestfallen at seeing the two together and is left with his mouth hanging open when Eleanor tells him that Devi was actually secretly pursuing him before she gave up and went back to Paxton.

So it looks like season 2 closes with Paxton finally, officially, Devi’s boyfriend. Our angst-ridden, hot-headed teen protagonist has come a long way from hoping to catch a glimpse of the high school athlete and memorizing his timetable to slow dancing with him in the middle of the dance floor. However, there might be trouble brewing as Paxton’s history doesn’t auger much hope for the new couple. For one, he has been ashamed of being seen with Devi in public ever since the start and has hurt her many times because of that. Also, on more than one occasion, he has patched things up with her only when he needed Devi’s help (first with his sister’s photoshoot and then with his biology exam).

It would be nice to believe that Paxton is a changed person, and there have been some significant changes (for the better) in what used to be a vain high school jock whose idea of fun was beaning his friends in the crotch with a water bottle. However, he only decides to go to the dance when he is told that his improved grades (achieved with help from Devi) will help get him into college, once again showing how he (maybe unknowingly) considers their relationship as transactional. It’s quite likely Paxton will continue to be fickle. The fact that Devi’s late dad, in a dream, tells her that she’s too good to be with someone who tries to hide her also seems to hint that, once again, things with Paxton are not going to end well. Hopefully, no one gets hit by a car this time.

Why Does Kamala Leave Her Proposal Dinner?

Season 2 is a period wherein the main characters begin to take charge of their immediate destinies as opposed to being tossed around by the games of chance, fate, and social pressures, as was the case in the previous season. This aspect is especially evident in Kamala, who, after great trepidation, stands up to her petty research supervisor. Her next act of defiance is even bolder when she secretly walks out of the proposal dinner of her arranged marriage that her future in-laws came all the way from India for. It is even more of a surprising move considering her fiance seems to be quite understanding and deeply in love with her.

However, he fails to recognize the atrocious behavior of Kamala’s colleagues and repeatedly advises her to just “play the game.” In essence, as his angrily simmering fiance puts it, he asks her to keep her chin up while keeping her head down. At this point, we see Kamala lose hope in her husband-to-be, realizing she needs someone more supportive. Interestingly, Devi’s infamous temper is largely responsible for inspiring her demure older cousin to take a stand for herself. This also feeds into Kamala’s overall character, who is not ready for an arranged marriage and has other (possibly romantic) ambitions.

What’s Going on Between Nalini and Dr. Jackson?

Nalini, too, breaks out of her cycle of mourning, and for the first time, we see her truly relaxed whilst she spends time with her professional competitor Dr. Jackson. Initially skeptical of the celebrity dermatologist’s expertise and constantly scoffing at the expensive pseudo-cosmetics he keeps pushing, the delightfully stereotypical stern Indian mother is surprised by the charming doctor’s helpful advice regarding parenting. After a long-standing rivalry, the attraction between the two is swift, and the more they get to know each other, the more they seem to be perfectly matched. Dr. Jackson, too, is a single parent and is, contrary to Nalini’s belief, highly qualified and modest.

Of course, Devi’s tantrum when she finds out about the affair forces Nalini to break things off with the doctor, who looks genuinely disappointed at her decision. However, it might not be the end of the road for them. Nalini’s mother-in-law, for one, stands up for Nalini’s freedom to do as she wishes. This comes as a big (and rather welcome) surprise for the widow who already feels guilty about being with Dr. Jackson instead of continuing to mourn her husband. It also looks like Devi, through her own experiences, is learning the importance of true connection and might just be more forgiving if her mother and Dr. Jackson do take another chance at love.

Tennis legend John McEnroe keeps up an entertaining commentary on the happenings in Devi’s life and doesn’t shy away from throwing in his own (obviously scripted) opinions on the major ups and downs. He (and the camera) also politely look away during Devi and Paxton’s steamy kissing session. The only reason given to the audience for him narrating the show is that our protagonist’s late father was a huge fan of the retired sportsman. This is further emphasized when the real McEnroe makes an appearance in the season 1 finale when Devi’s father’s ashes are being dispersed into the sea. 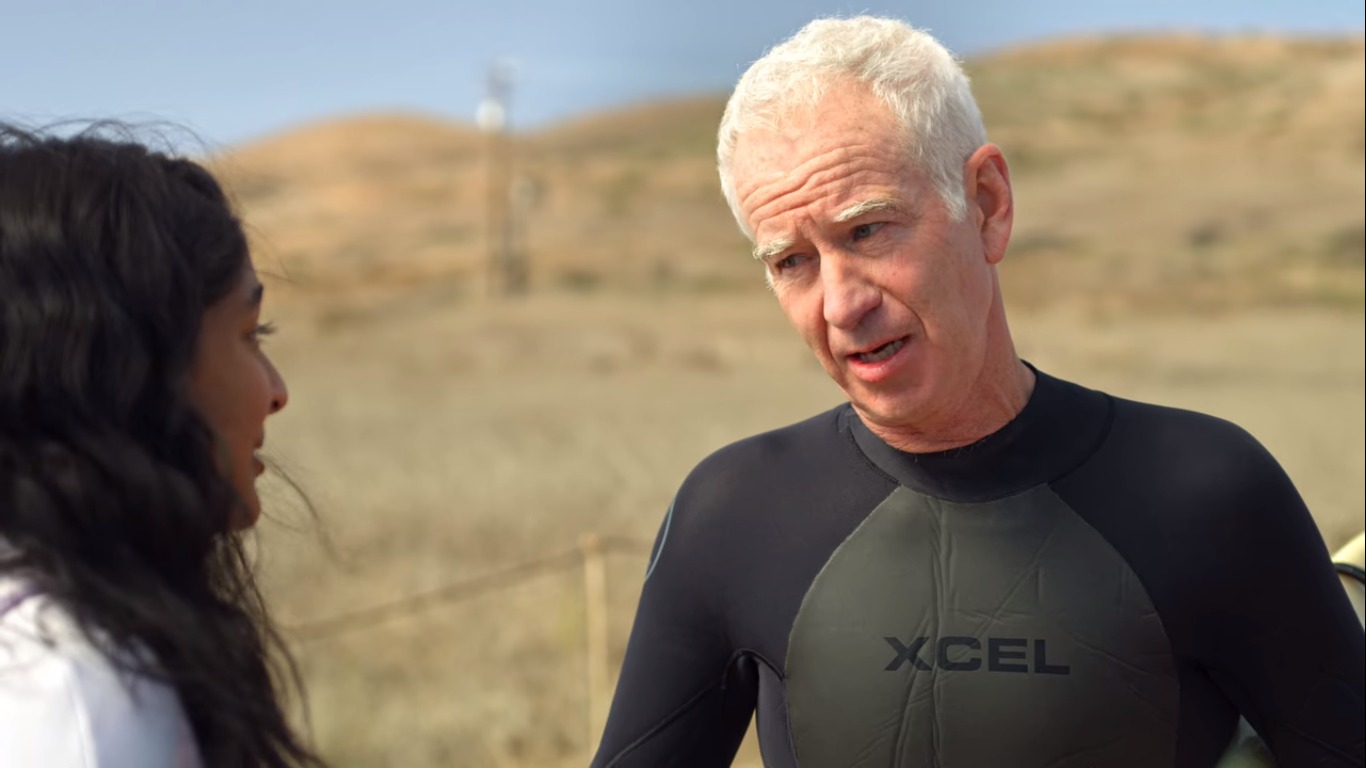 Over the course of the show, we also see McEnroe, known for his outbursts in his younger days, being the perfect sympathetic lens through which we see Devi’s hot-headed character. However, there are a host of other reasons why the tennis star is found narrating the colorful life of a frustrated teen. For one, the show’s creator Mindy Kaling grew up watching McEnroe play. The sportsman, who has appeared in films like ‘Wimbledon’ and ‘Anger Management’ amongst many others, is also considered popular amongst older demographics and is well-loved in India — both potential target audiences for the show.

Lastly, the layered joke that McEnroe hoped would come across (as it clearly did!) is that audiences would end up asking the very question that we are contemplating. He reportedly said, “I was hopeful that people would look at this and go, ‘Whoa, why the hell is John McEnroe doing this?’” Well, we did wonder. And now we know why.

Read More: Best TV Shows Like Never Have I Ever