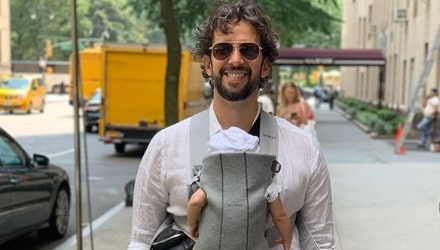 Nick Cordero, the Broadway star, has passed away at the age of 41, after battling with coronavirus for three months. He is survived by his wife, Amanda Kloots, and their one-year-old son, Elvis. Kloots posted a lengthy farewell to Nick, saying, “My darling husband passed away this morning.” She added, “He was surrounded in love by his family, singing and praying as he gently left this earth.” Understandably, she’s in mourning and has stated, “I am in disbelief and hurting everywhere. My heart is broken as I cannot imagine our lives without him.”

How Did Nick Cordero Die?

Cordero died due to complications arising from coronavirus. There’s no mention of previous underlying conditions in the reports that have come out after his demise. We know that he was admitted to Cedars-Sinai Medical Center in Los Angeles, in late March, from what appeared to be pneumonia. An initial test found him Covid-19 negative, but Cordero tested positive in a subsequent test.

Nick Cordero had no underlying health conditions, and was in INCREDIBLE shape as a broadway performer. Covid doesn’t discriminate. Wear your mask. We lost an incredible human.

He fought it for nearly 13 weeks, and his condition worsened soon after he was admitted. Nick remained in a medically induced coma, and Kloots revealed that he had to be resuscitated at one time after an infection triggered a deadly sequence of events. His struggles to recover were compounded by the coronavirus, causing issues with blood flow to his lower extremities. The doctors were eventually forced to amputate his right leg. Nick also went into septic shock, had a lung infection, and a temporary pacemaker put in.

By April, Nick managed to beat Covid-19 and tested negative twice. However, the long term effects of the virus were starting to prevent a full recovery. Doctors told Amanda that Nick’s lungs were so severely damaged that they resembled the lungs of a lifelong smoker. However, Nick was removed from the ventilator. Finally, he regained consciousness in May and began to respond to simple commands. However, a week later, the path to recovery went a little downhill.

Last week, Kloots revealed that Nick would need a double lung transplant. She also stated how the doctors had told her four times that Nick would not survive the night, but he had come through each time. Amanda spoke of wanting Nick to make a recovery, saying, “I just want to jump in his bed and hug him and grab him and squeeze him, but you know, you have to be very careful with everything that’s going on, so I grab his hand, and I massage his hand, and I hold his hand, and I’m waiting for the day that he holds my hand back.”

Notably, Nick is known for starring in the musical adaptation of Woody Allen’s ‘Bullets Over Broadway’ for which he earned a Tony nomination. He’s also appeared in ‘Rock of Ages’ and ‘A Bronx Tale: The Musical,’ among others. His tragic demise has left many people mourning, while others have taken the opportunity to highlight the deadly nature of Covid-19, and why it is crucial for us to wear masks. [Cover Image Courtesy: Amanda Kloots/ Instagram]