‘Nightcrawler’: An Unsettling Character Study and a Gripping Thriller 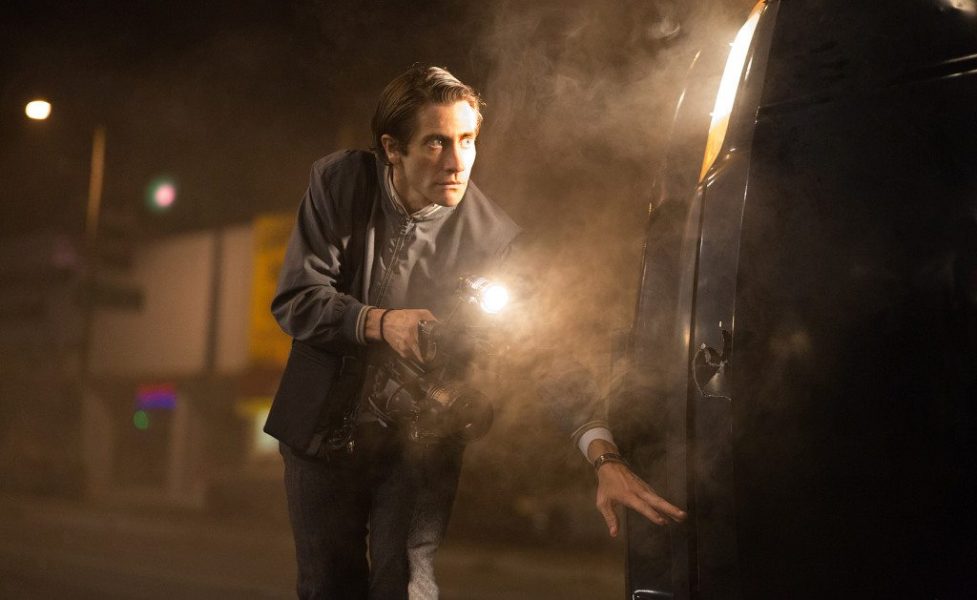 Last year brought us so many good movies that it is hard to pick favorites; one can only think about the competition going into the awards. We had Richard Linklater’s ‘Boyhood‘ — a classic story of love, friendship and growing up; we had ‘Interstellar‘ by Christopher Nolan, an epic tale about mankind’s survival; we also had the mind-boggling ‘Birdman‘, a satirical take on the nature of fame by the visionary Mexican director, Alejandro Gonzalez Inarritu.

But slowly making its way through the biggies, and not making any real noise, was a modern noir thriller: ‘Nightcrawler’.

Describing the experience of watching ‘Nightcrawler’ is pretty hard; firstly, it is hard to pin it down to any specific genre. It is noir, yes, definitely. But it is also a deeply unsettling drama about a man who will go to any lengths to achieve success. Dan Gilroy is at the helm here, who wrote the lesser of the Bourne movies(you know which one I am talking about), and the light-hearted Real Steele.

The canvas is L.A and its myriad nocturnal tales of crime and sleazy journalism. The protagonist is Lou Bloom-portrayed by Jake Gyllenhaal — a small time thief, who firstly comes across as only mildly insane. He goes around trying to find jobs, spewing off high-end management and success mantras which he has picked up from the internet. It is unclear why he does that, and is even funny at times. Unsuccessful in any real venture, he notices the level of crime during the night-time, picks up a camera, and starts shooting. It is then when the real horror reveals itself.

Lou starts freelancing in L.A’s underbelly, moving among the crime scenes like a sly fox, catching vital glimpses here and there. He makes money in the process, selling videos to a News agency who runs the small crime pieces in the early morning news. Gradually, from underneath the mask of a photographer-cum-salesman, Lou’s level of insanity begins to show. He isn’t desperate to make money; no that’s not the case here. He is enjoying his success as only he can tell; his words are the same management ideas he has picked up, his face brightly lit and smiling. He also takes an assistant, feigning to be the Manager of a fictional company.

Gyllenhaal has given a frightening quality to Lou’s character; you would think he has just arrived in the night out of nowhere, ageless and without a past. He is alone, and through the years of his life, he seems to have garnered a hatred for people. He is only somewhat educated, and he channels everything through the knowledge he has gleaned from the internet, which is terrifying. Lou is a mirror of our troubled times; what being really alone feels like, and what it means to be dangling from the cliff of sanity, fingers slipping bit by bit, and then falling off. It all seems nostalgic because another famous fictional character had the same qualities. Lou seems to come across as a different version of Robert DeNiro’s Travis Bickle himself. The movie itself feels, in some parts, an homage to ‘Taxi Driver’. But where Bickle managed to hold his own and became a hero, Lou, in the blinding glare of his success, becomes a villain. He seems to have no moral code, no life altering dilemmas and no love for any one in general. Ambition is his only virtue and vice.

The movie is deftly handled by the director, and never once loses sight of what it is trying to convey, never striking a false note. The script is taut and perfect. All of it comes together in a riveting car-chase at the end of the movie, where Lou is shooting the pursuit in real-time. His partner gets shot in the process and he shoots him dying as well, the horror complete. Jake Gyllenhaal has given the performance of a lifetime here.

‘Nightcrawler’ is executed to near-perfection by Dan Gilroy. It goes to show the business-end of journalism, its fierce reality, how one man’s pursuit of success can affect others around him, and how irrelevant and banal any real news can become in the race to get ratings.