No One Gets Out Alive Monster, Explained 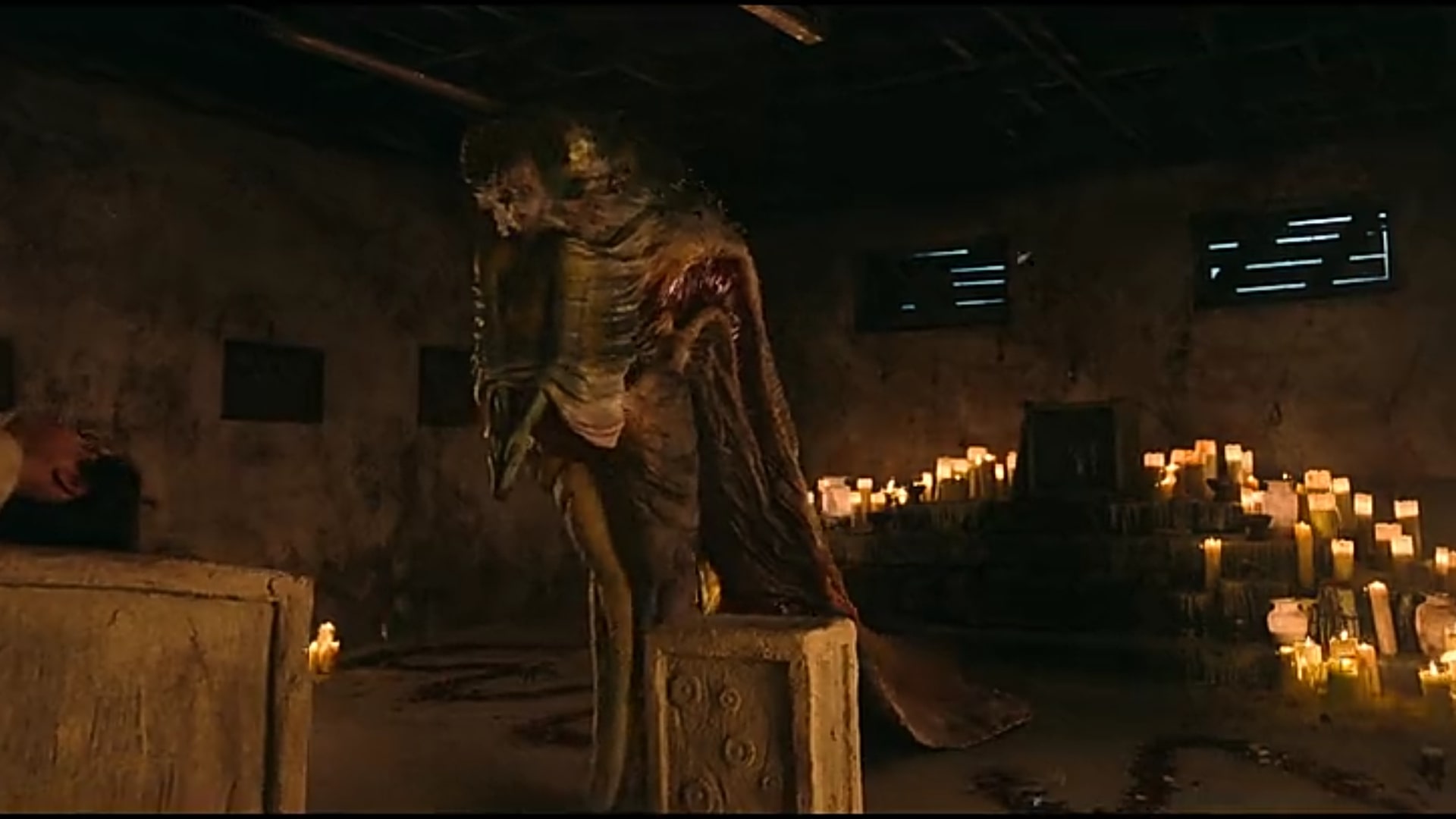 Based on Adam Nevill’s 2014 namesake horror novel, ‘No One Gets Out Alive’ is a film that explores social issues such as poverty, immigration, and immigrant exploitation, all the while telling a truly terrifying story. The film revolves around Ambar (Cristina Rodlo), who comes to Cleveland after her mother’s death in search of a better life and starts living in the old and ramshackle Schofield Heights women’s boarding house. However, she soon discovers that the house is full of ghosts of women who were violently killed as sacrifices to an entity. If you want to know more about this mysterious monster, we got you covered. SPOILERS AHEAD.

What Is the Monster in No One Gets Out Alive?

The monster in ‘No One Gets Out Alive’ is the Aztec goddess Itzpapalotl. The filmmakers introduce an ominous stone box with various inscriptions on it quite early in the movie. It becomes a constant part of the dreams and visions that Ambar has. At the beginning of the film, black and white footage shows that a team of excavators goes to Mexico in the 1960s and retrieves the box from the ruins of a temple. The human skulls and bones scattered around the temple make it clear that sacrifices were once conducted there.

As Ambar becomes increasingly troubled by the things she experiences in her visions, she manages to sneak into the study, where the proprietor, Red (Marc Menchaca), had explicitly told her not to go. She finds a photo of Red’s parents there, Mary and Arthur Welles, with the latter’s face scratched out. She finds a recording of a man (most probably Arthur) chanting in some unknown language before adding in English that “as performed within the ritual sacrifice. You will give her the elderly, women, and children.” 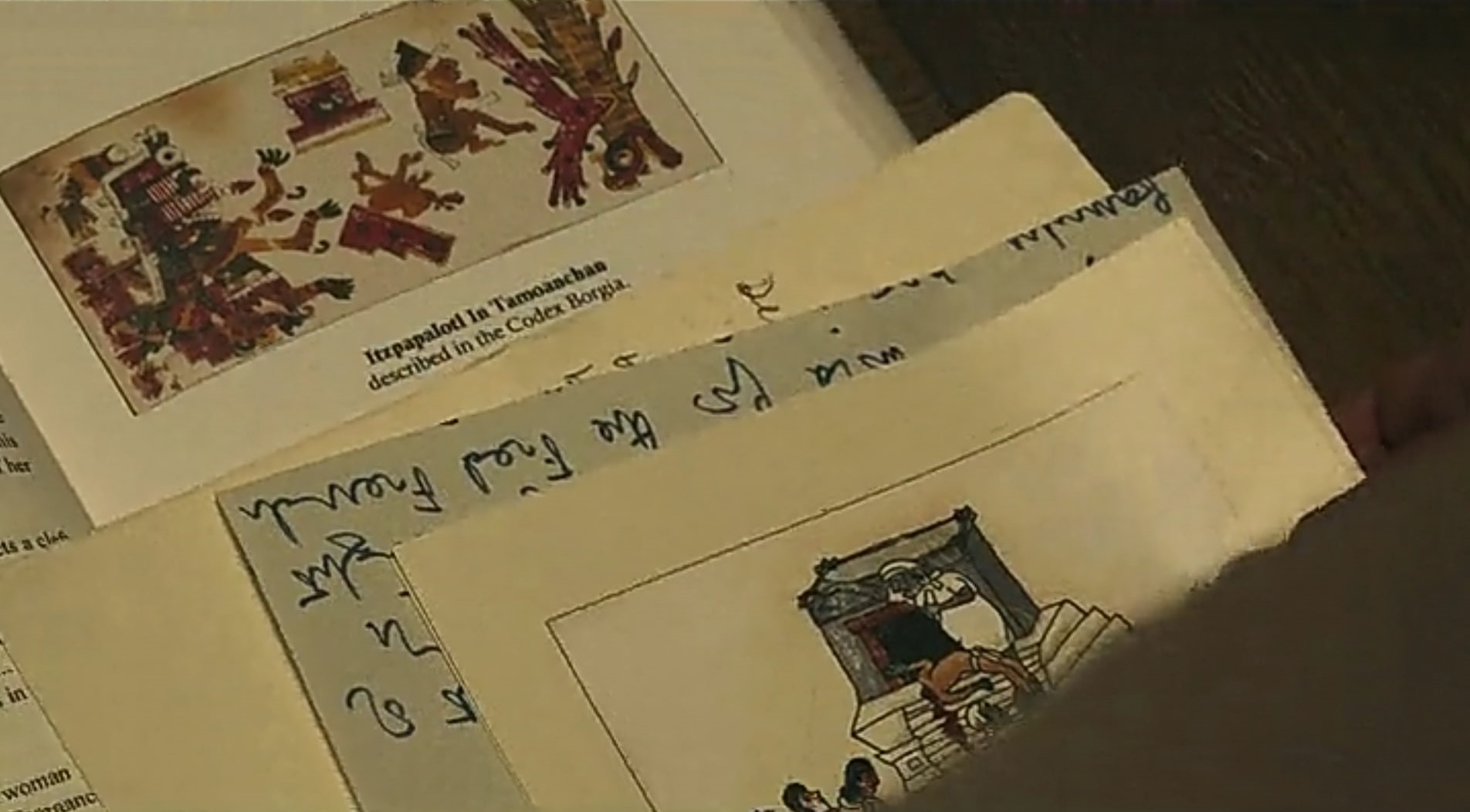 In that same room, she finds a book titled ‘Early Mesoamerican Rituals.’ Inside it, there is an artist’s depiction of the box and the ritual sacrifices that are supposed to be performed in front of it. There is also another photograph in the book itself that becomes visible to the audience for a brief moment. The photo depicts Itzpapalotl, the Aztec skeletal warrior goddess, in the Tamoanchan, the paradisical realm she ruled. As the book states, the picture is from ‘Codex Borgia,’ a Mesoamerican pictorial manuscript.

In the Aztec iconography, Itzpapalotl is linked to the moth Rothschildia Orizaba, from the family Saturniidae. Furthermore, her name translates to “obsidian butterfly” or “clawed butterfly.” This is why the film is heavy with butterfly, moth, and insect imageries. In the Aztec calendar, she is the patron goddess of the day Cozcuauhtli and Trecena 1 House. She is also supposed to be one of the Tzitzimitl or star demons that attack the sun causing a solar eclipse.

In ‘No One Gets Out Alive,’ the box likely serves as a portal to her realm. When a sacrifice is offered to her on her altar, she climbs out of the box and devours the heads of her victims through the mouth in her nether regions. Arthur brought the box to Cleveland and began sacrificing young women (who were often poor immigrants) to the deity in exchange for her blessing. Mary, who initially was his accomplice, suffered the same fate. Red’s brother, Becker (David Figlioli), later killed their father, started performing sacrifices of his own hoping that the goddess’ blessings would cure his mental health issues.

When Becker discovers that Itzpapalotl has spared Ambar, he struggles to understand the reason. After Ambar kills him and offers Red as a sacrifice to Itzpapalotl, all her injuries are healed. As she has nothing left in the outside world, Ambar decides to remain in Schofield Heights and become Itzpapalotl’s newest priestess.