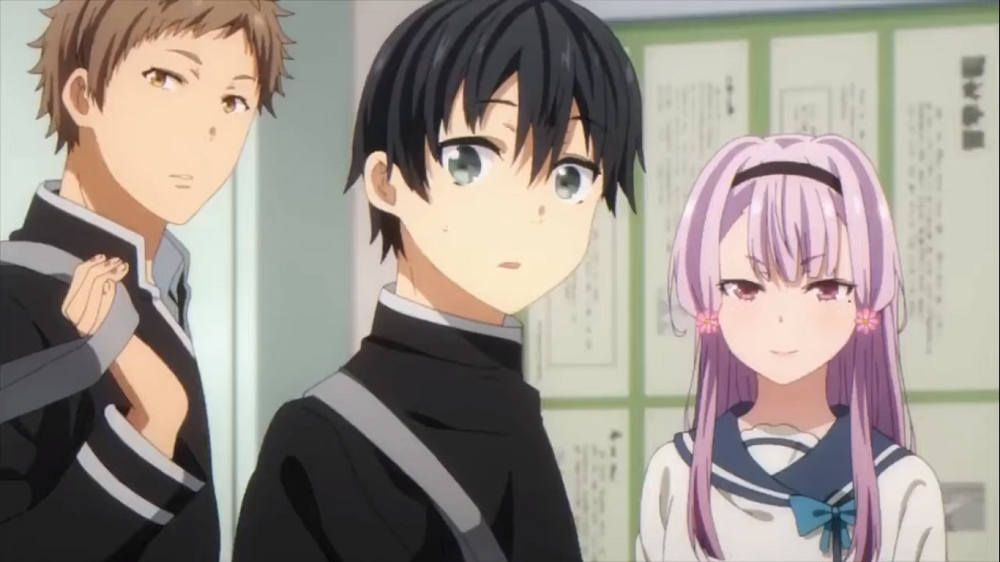 ‘Ore wo Suki nano wa Omae dake ka yo’ also referred to as ‘Oresuki Are You the One Who Loves Me?’ is based on a Japanese romantic comedy light novel series written by Rakuda and illustrated by Buriki. It has a typical school setting and for the most part of it, it has some very cliched rom-com tropes as well. But the basic premise of the shows is far from being generic because unlike similar romantic anime shows, it completely drifts away from the whole Harem theme. Another thing that makes its light novels really interested is the involvement of sporadically distributed plot twists. All of these twists are perfectly timed and come with a whole lot of backstories.

The characters in the original story go through a lot of development but in the anime’s case, that has been tweaked a little. So in the end, if you’re expecting ‘Ore wo Suki nano wa Omae dake ka yo’ to be another one of those repetitive rom-coms that offer nothing refreshing, you’re in for a big surprise.

Oresuki Episode 12 Release Date: When will it premiere?

The original novel series on which the anime is based on was first published back in February and so far, it has more than a dozen volumes.  The first episode of the show released in October, 2019 and since then has been following a weekly release pattern. Oresuki episode 12 will release on December 25, 2019. It will be the final episode of the show. If you are wondering about Oresuki episode 13 release date, please check out our preview of Oresuki season 2.

‘Ore wo Suki nano wa Omae dake ka yo’ has been licensed under Aniplex of America. The English subbed version of the show is available on Crunchyroll, and Funimation.

‘Ore wo Suki nano wa Omae dake ka yo’ is pretty much the opposite of a Harem where the protagonist actually struggles to get the attention of the girls of his class. After being invited by his childhood friend Himawari who is the cool beauty upperclassman Cosmos, Kisaragi Amatsuyu starts hoping that he might finally be able to date a nice girl. But to his disappointment, she seems to have a crush on his friend and only wants to seek his help. As he tries to fight his endless battle of loneliness, a girl from his school starts showing interest in him. Unfortunately, she isn’t all that great looking and sports thick-framed glasses with long braids. Amatsuyu eventually starts hating her because of how she keeps teasing him but at the end of the day, she is the only girl who truly likes him.

Sumireko is a gloomy studios girl who later starts liking Amatsuyu. Because of how nerdy she looks, she isn’t really considered to be all that attractive but for the most part of the series, it seems like she does not even care about that. Despite having a crush on Amatsuyu, she never really expresses her feeling to him and instead makes fun of him all the time. All of this just makes him hate her even more. She sports black square-framed glasses and has jet black hair that is often tied up with two long braids.

Amatsuyu Kisaragi is the main protagonist of the anime who really wishes he had a girlfriend. All of his hopes are shattered when his crush from his school invites him to meet her alone but only ends up expressing how much she admires his best friend. His dreams of dating are further crushed when he realizes that the only girl in school who likes him is Sumireko Sanshokuin. When it comes to his appearance, he looks pretty normal for his age and is usually seen in his school uniform. He has medium length jet black hair and big grey eyes.