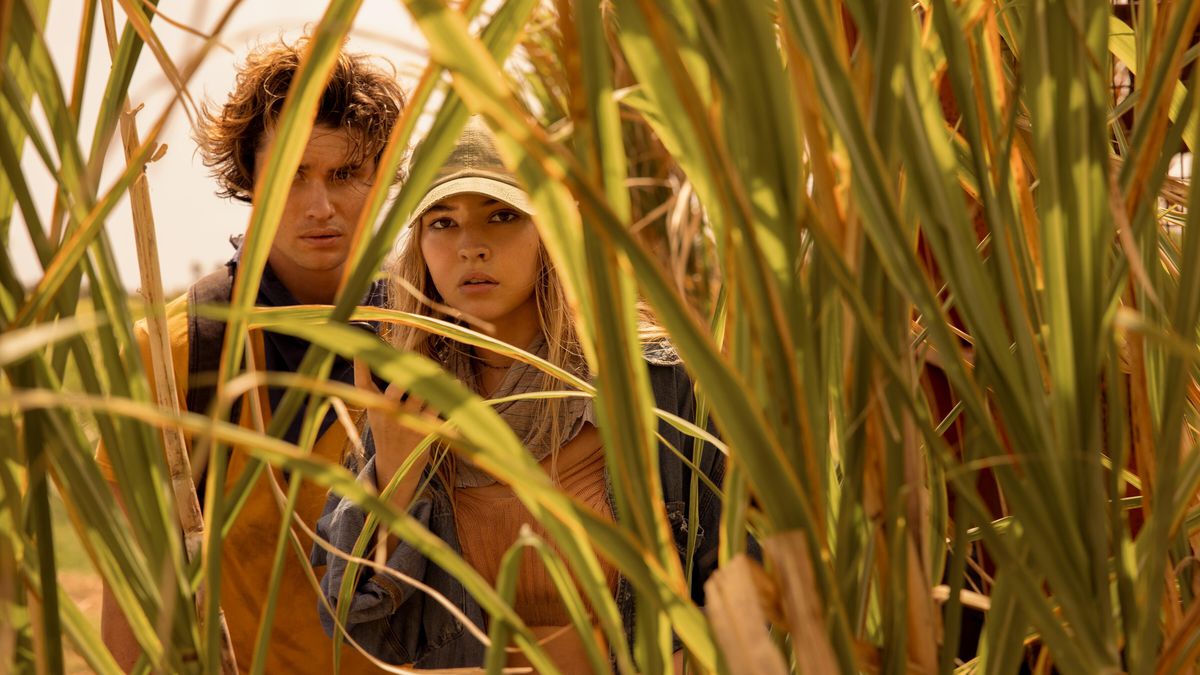 ‘Outer Banks’ is a Netflix teen drama mystery series created by Shannon Burke, Jonas Pate, and Josh Pate. It predominantly revolves around a group of teenagers residing in the eponymous barrier islands off the coast of North Carolina, USA. One of the primary themes of the show is the social and economic disparities between the affluent summer vacationers of Figure Eight, known as the Kooks, and the working-class locals of the Cut, known as the Pogues.

At the end of season 1, things were pretty bad for John (Chase Stokes) and his friends. Ward Cameron (Charles Esten) takes all the gold and sends it to his house in Nassau, Bahamas. John gets falsely accused of murdering Sheriff Peterkin. While running from the authorities with Sarah (Madelyn Cline), he drives his boat into a raging storm. Fortunately, they both survive and end up on a boat to Nassau.

Season 2 fleshes out the supporting characters, especially Pope (Jonathan Daviss), whose family history becomes an integral part of the storyline. A new antagonistic character is introduced: Carla Limbrey (Elizabeth Mitchell). She has been looking for a priceless artifact that was on the Royal Merchant when it went down. Meanwhile, Rafe (Drew Starkey) desperately tries to become the man his father wants him to be, while Sarah has to choose between her family and her friends. Here is everything you need to know about ‘Outer Banks’ season 2 ending. SPOILERS AHEAD.

Season 2 begins with Sarah and John’s arrival in Nassau. Terrance (Terence Rosemore), the captain of the boat they were on, discovers that John is an alleged cop killer and there is a $50,000 reward on his capture; he tries to apprehend the couple and give them over to the authorities, but John and Sarah manage to escape. After discovering that the gold is still in Ward’s house in Nassau, John and Sarah team up with Terrance and his crew to steal the gold. However, the plan ultimately fails, and Terrance and most of the crew members are arrested. Ward and Rafe get the gold back and send it to a Swiss bank.

John and Sarah successfully evade capture with the help of Cleo (Carlacia Grant), a member of Terrance’s crew. Meanwhile, their friends, along with the rest of Outer Banks, believe that they are dead until John and Sarah contact them. Carla Limbrey, a wealthy woman from Charleston, reaches out to Pope, telling him that she can provide him with the proof that can exonerate John. However, Pope, JJ (Rudy Pankow), and Kiara (Madison Bailey) soon find out that Limbrey has an ulterior motive. She has been searching for the treasure because she believes it has something that can cure her.

John and Sarah unite with their friends in Charleston. They discover that Denmark Tanny, the sole survivor of the Royal Merchant shipwreck, brought something else to the shore along with the gold: the Cross of Saint Domingo. Made of gold and pricey stones, the Cross is said to have contained the Garment of the Savior, a Christian relic that can heal many maladies. John dupes Limbrey to give him the proof of his innocence. Ward takes all the blame and seemingly kills himself by exploding his boat. Later, Pope and his friends find the Cross hidden in the church where Denmark gave sermons. But Rafe and Limbrey’s associate Renfield take it from them.

In the season 2 finale, Rafe and his family take the Cross and board a ship bound for an island near Guadeloupe. They drug Sarah and take her with them as well. Using an explosion as a diversion, John and his friends get on the ship and hide in a shipping container. Later, they find Cleo among the crew of the ship. With her help, they set out to rescue Sarah and get the Cross back.

No, Big John (Charles Halford) isn’t dead. In the final scenes of season 2, Limbrey arrives at a home in a town called Bridgeport in Barbados after receiving a letter. She asks the man that opens the door about the health of a third individual. The man responds by saying, “Half dead for a long time.” He points Limbrey to a cabin by the sea. As she enters the cabin, it is revealed that Big John is alive. He tells Limbrey that he will reveal the location of the Garment of the Savior in exchange for Limbrey helping his son.

Big John’s death serves as one of the main plot devices in the first season. It is also the driving force behind John’s actions throughout the series. He later learns that Ward orchestrated the series of events that ultimately led to Big John’s death and justifiably blames Ward for it. As Sarah observes, when Ward seemingly dies, there is a satisfied gleam in John’s eyes. However, despite all this, he ultimately forgives Ward, as shown in the season 2 finale. It will be interesting to see how the dynamic between Sarah and John changes after they find out that John’s father is alive.

John and his friends believe that Big John was marooned on a deserted island after Ward threw him overboard. They think that he died there. In reality, he must have been rescued by some passing ship and made his way to Barbados. The body that was found on the deserted island belongs to someone else. The identity of that person might be revealed in season 3.

What Happens to the Cross of Saint Domingo?

In the course of the series, Pope discovers that he is a descendant of Denmark Tanny. The Cross of San Domingo was originally on a Spanish ship called San Jose. The crew of the Royal Merchant came upon the San Jose while it was on fire. In his notebook, Tanny wrote that after ensuring that the Cross was on the Royal Merchant, Captain Limbrey ordered his men to kill the Spanish soldiers. But his greed ultimately proved to be his downfall as neither he nor any of his men survived the shipwreck. Only Tanny made it to the shore with both the gold and the Cross. He hid them separately because the Cross was too big. Pope finds it in the abandoned church where his ancestor served as a pastor to the other freed slaves. However, Rafe acquires it and later betrays Limbrey for it.

In the season 2 finale, it’s on the ship heading toward what is supposed to be the Cameron family’s private island. Although John manages to rescue Sarah, the group fails to get the Cross, which Pope has come to consider his family’s heirloom. He decides that if he and his friends can’t have the Cross, no one else can, so he tries to drop the Cross into the ocean using a crane. However, Rafe grabs one of the ropes attached to the Cross and pulls it up with the help of the ship’s crew. By the end of season 2, the Cameron family has both the gold and the Cross, while John and his friends are trapped in some Caribbean island.

No, Ward isn’t dead. He claims to Sarah that he faked the entire incident to protect his family, and he seems to ardently believe that. He took the blame for Peterkin’s murder to protect Rafe, as Rafe killed Peterkin to prevent his father’s arrest. When the police came for Ward, he used the scuba gear on his boat to get away from the explosion. It seems that no one except Rose knew that Ward was still alive. As Sarah unequivocally chooses her friends over her family in the season finale, Ward realizes that he has lost his daughter. He also realizes that he can’t let her go because she will most probably speak to the authorities, and they will come after him and his family once more.

Ward then makes the same horrifying decision that his son previously made and tries to kill Sarah. Fortunately, John arrives in time and saves her. He gets Ward in the same position as the latter had Big John in and even seems to get Sarah’s permission to kill her father. But he doesn’t go through it, likely knowing that if he does, there is no coming back from it. It’s an incredible act of forgiveness that lets John move on and release his grief. Furthermore, it spares Sarah from watching her father die again, and she seems to be relieved because of it.

The second season ends with Ward as a broken man, both physically and mentally. His greed, along with the obsession about preserving the life he has built, has made him a man that he himself despises. Rafe comes to his chamber and boasts that they have everything, prompting Ward to look away. Realizing what’s in his father’s mind, Rafe promises him that he will get Sarah back for the family. He also promises his father that he will step up and become a leader like Ward, not realizing that the father he idolizes is no better than him, not anymore at least.