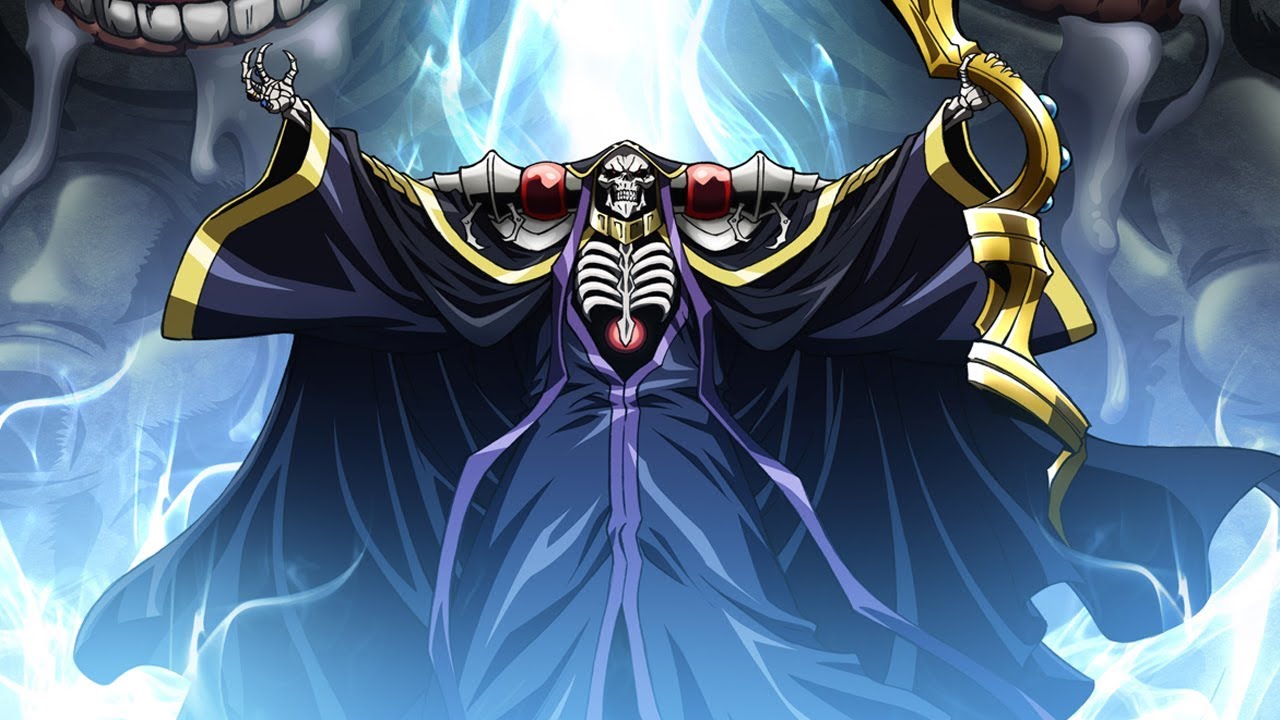 It would be a gamer’s dream to be transported right into the fantasy world of a video game. For most people, gaming is often a medium used for escaping reality but what if this medium itself becomes one’s reality. Very similar to this is the story of Aniz from ‘Overlord’, who magically gets transported to the world of his favorite game. But that’s not it. He is no hero of this but the villain and most other enemies he faces are nowhere even close to him. I’m sure if you’re a gamer you’re already lost thinking about how ideal something like that would be, but snap out of it. This is an anime, not real life!

Villains, or the bad guys of movies, TV shows or anime are often forgotten and the prime focus is usually on the protagonists. But sometimes, these bad guys are just so good you can’t help but love them for their evil traits and sinister deeds. Their overwhelming power, cunning intelligence and, of course, their charisma are things that make us root for them. ‘Overlord’ is not an anime wherein the bad guys somehow outweigh the protagonists; it’s a show entirely about these bad guys and they are both the antagonists and protagonists.

‘Overlord’ has offered us a variety of things right from the first season and now the third season has something more. Unlike the second season, there are far fewer lizardmen and a lot more action, which is always a good thing for any anime. A fairly new plot has been woven together that gives more screen time to characters like Yandere Succubus and Shaltear the Vampire Queen, who were neglected last season. The world building of this season seems far better and the arcs that led to the downfall of the previous one have been ignored completely. Season 3 of ‘Overlord’ is a refreshingly new start that gives us some fluid entertainment along with some absurdly hilarious moments.

This season makes you look forward to the next one because finally, things are now ramping up into a bigger picture with subtle hints here and there. Like the previous seasons, ‘Overlord’ still functions mostly on its strong character and sadism, but it can be clearly seen that it’s building up into something that covers more ground. An anime that improves every single season should be enough of a reason for anyone to watch ‘Overlord’. We won’t say that ‘Overlord’ is one of the best anime out there yet because it certainly is not, but the rate at which it is going, we can certainly see it striding towards a much better future. Why do we say this? Well, just sit back, relax and read further to know why exactly ‘Overlord’ Season 3 is totally worth your time.

‘Overlord‘ Season 3 first started airing on the July 10, 2018 and ended its run on October 2, 2018. No confirmations have been given yet for the fourth season but considering the number of light novels this show has, it is very likely that there will be one in the near future. Get more details about Overlord season 4 right here.

The plot kicks off right where the second season had left off: Aniz establishes Nazarick in a world that is completely unknown to him. He still has no clue how he ended up inside the game and what is his true purpose there. He is now trying to go with the flow and is determined to continue his quest to take over the entire gaming world he lives in. He plans to do this by putting into action his next move of conquering and making his presence known to all the neighboring kingdoms. But to do this, he has to do a lot more than just mere planning. He needs to prepare for war in order to claim more territory and grow his terror faster into neighboring lands.

The season again follows two separate arcs where one is about how Enri and Npheria’s progress is directly linked to Aniz’z future plans of expansion. The second arc portrays the impact of Aniz’s actions on the Empire as he tries to make his way towards ruling the entire gaming world. The world building in this season is far greater than the last one and it’s almost like watching an entire walkthrough of an actual MMORPG. The plot not only focuses on Aniz but also goes beyond the boundaries of his kingdom exploring other characters. Subtle hints are dropped that in the future, these characters might have something to do with Aniz and these hints leave you guessing about how they will interact with him later.

From Season 3, it is very clear that Studio Madhouse has been sticking to its previous formula of staying true to the source material, which in this case is the light novel series by Kugane Maruyama. This season is based on the 7th, 8th and 9th volumes of the light novels but these have a very unusual chronological order. Some events are initially written with respect to the perspective of only one character and are later repeated with the perspective of another.  Madhouse Studio has managed to deal with this smartly by showing these perspectives of the same events simultaneously and maintaining a more organized format.

According to the books, the events of Volume 8 act as a prequel to Volume 7 but season 2 of the anime was not able to portray this because of the lack of appropriate character build up. So to somehow make up for this, the first episode of season 3 starts off with the story of volume 7 and then throws us back in time to the events of volume 8 for the next 5 episodes. The rest of the season then covers volume 7 and 9. We have to say that this is really brilliant on the studio‘s part because while watching the anime, not even once you’ll feel that the pacing is going off-track.

The polarity of who to vouch for reaches a whole new level in this season. This is something that had already been initiated in the last one but by now, even the “good guys” have well-developed characters and you somehow start looking out for them as well. But then you see Aniz and the evil treacherous charisma that just draws you towards him. Sometimes you want his enemies to get out unscathed but other times you find yourself on Aniz’s side. This anime shows that good or bad can be relative and cannot exist without each other.

The overall pacing of the show is very slow and, to be honest, gets boring at times. But this pays off with a very satisfying ending which would not have been possible without the slow pacing. Just because the show is mainly about war and drama does not mean that it’s going to be serious at all times. Surprisingly, this anime has some really good comedy. Aniz, who is the main character, begins to lose his traces of being a human with time. But every once in a while, the human inside him pops up and makes his evil proclamations of ruling the world absolutely hilarious.

Season 3 really digs deep into the mind of all the characters and this is where it makes up for slow pacing. Initially, all of it feels like a drag and the snailish pace of the show starts taking a toll on you. But later, you understand the importance of all that slow yet significant character development. We get deeper insights into the mind of the protagonist the season and his directionless motive of just ruling the world by going with the flow. The anime parallelly focuses on various characters at the same time and later connects the dots to make sense out of all of them. There are some characters, though, who are not all that defined, which include the workers of Nazerick and the goblins protecting the village. But we can’t complain about this because there’s only so much you can do in a span of 13 episodes. Overall, character development is a major strong point for ‘Overlord’ and it’s something that makes us want more of it.

The animation style in this season is great but we don’t understand why the studio won’t just stick to one style for all of its seasons. It’s just a little off-putting to see different animation styles in different seasons and even derails you as a viewer from the entire vibe of the show. Season 3 has quite a noticeable amount of CGI to it which fits well but comes off as unpolished a lot of times, and that impacts the scenes overall. Some characters like Death Knights are freakishly huge and relatively, they don’t look good compared to the other normal sized characters. The animation is one aspect where this anime can improve a lot and can almost be perfect if it manages to do so.

‘Voracity’ by Myth and Roid makes for an insanely cool opening theme and even the closing theme is pretty impressive. The tracks also go really well with all the badass illustrations that are shown with them. But certain soundtracks are so repetitive that after a while, they make your ears bleed. Hopefully, there will be some new stuff in the music department next season.

It would be fair to conclude that with all this character development and improvement since the first season, ‘Overlord’ is surely aiming for the stars unless it screws up real bad. The animation part is on a downfall as of now but we expect an improvement in that aspect as well. The heart and soul of this anime are its characters and the limitless world they portray. These are certain aspects that will surely take the show even further. A solid 8.5 out of 10 is what this anime deserves and we hope that Season 4 will at least be a 9.

The English Dub version of ‘Overlord’ Season 3 is available on Funimation and those who prefer staying loyal to the original voices of the characters can find the English dubbed version on the same website.