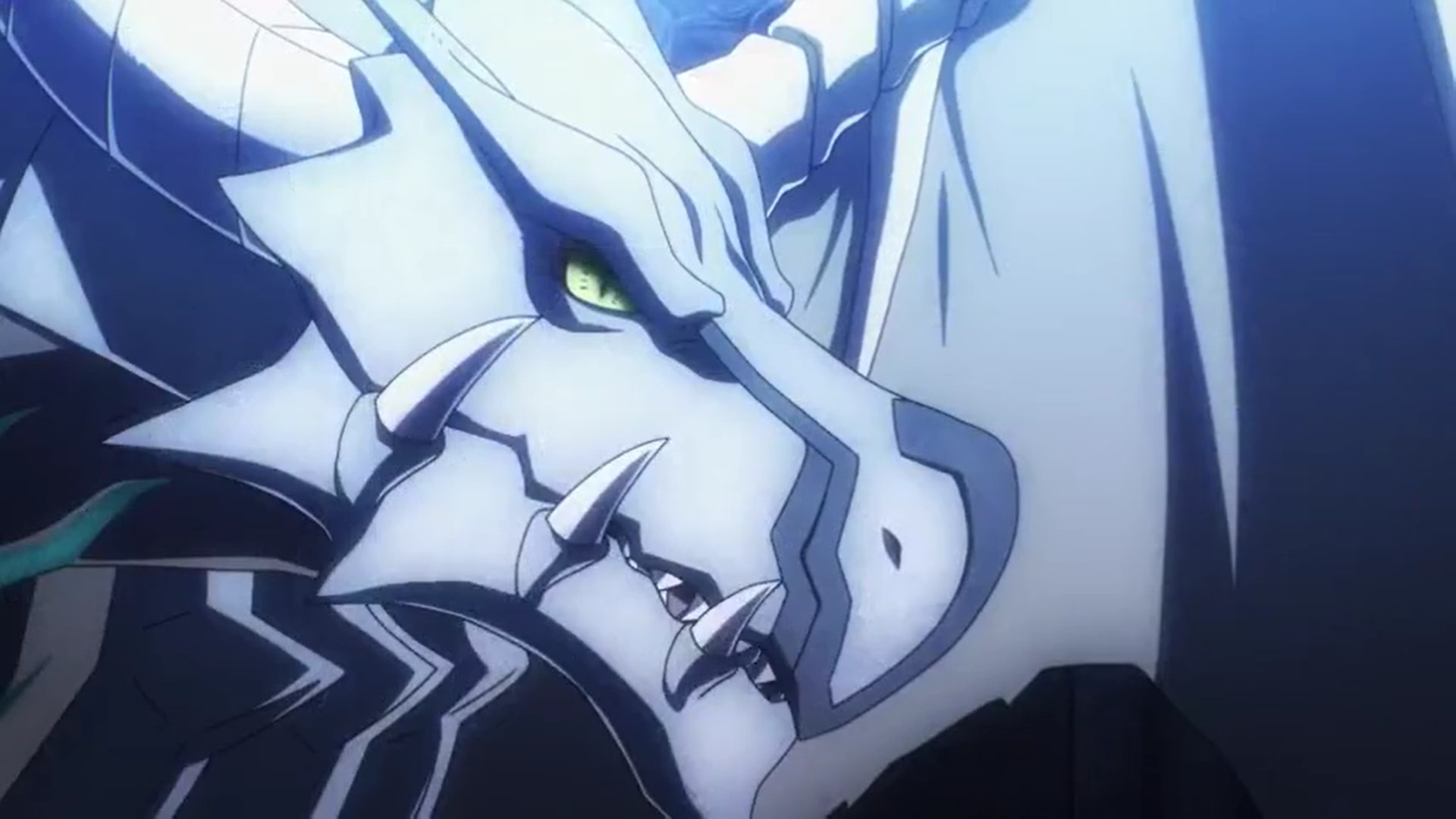 In the eleventh episode of ‘Overlord’ season 4 titled ‘Well-prepared Traps,’ the King of the Re-Estize Kingdom finally learns that his empire is on the verge of collapse. Meanwhile, Albedo and Aainz prepare to confront some powerful enemies on their own with the motive to gather intel. Here’s everything you need to know about the ending of ‘Overlord’ season 4 episode 11. SPOILERS AHEAD!

As the King of the Estize Kingdom waits patiently for any news regarding the war, he is told by a noble that Prince Zanac and his men have gone missing. All attempts to establish contact with them have also failed. The King realizes that the kingdom is about to fall so he relieves every noble of his duties immediately and orders them to leave the capital as soon as possible. 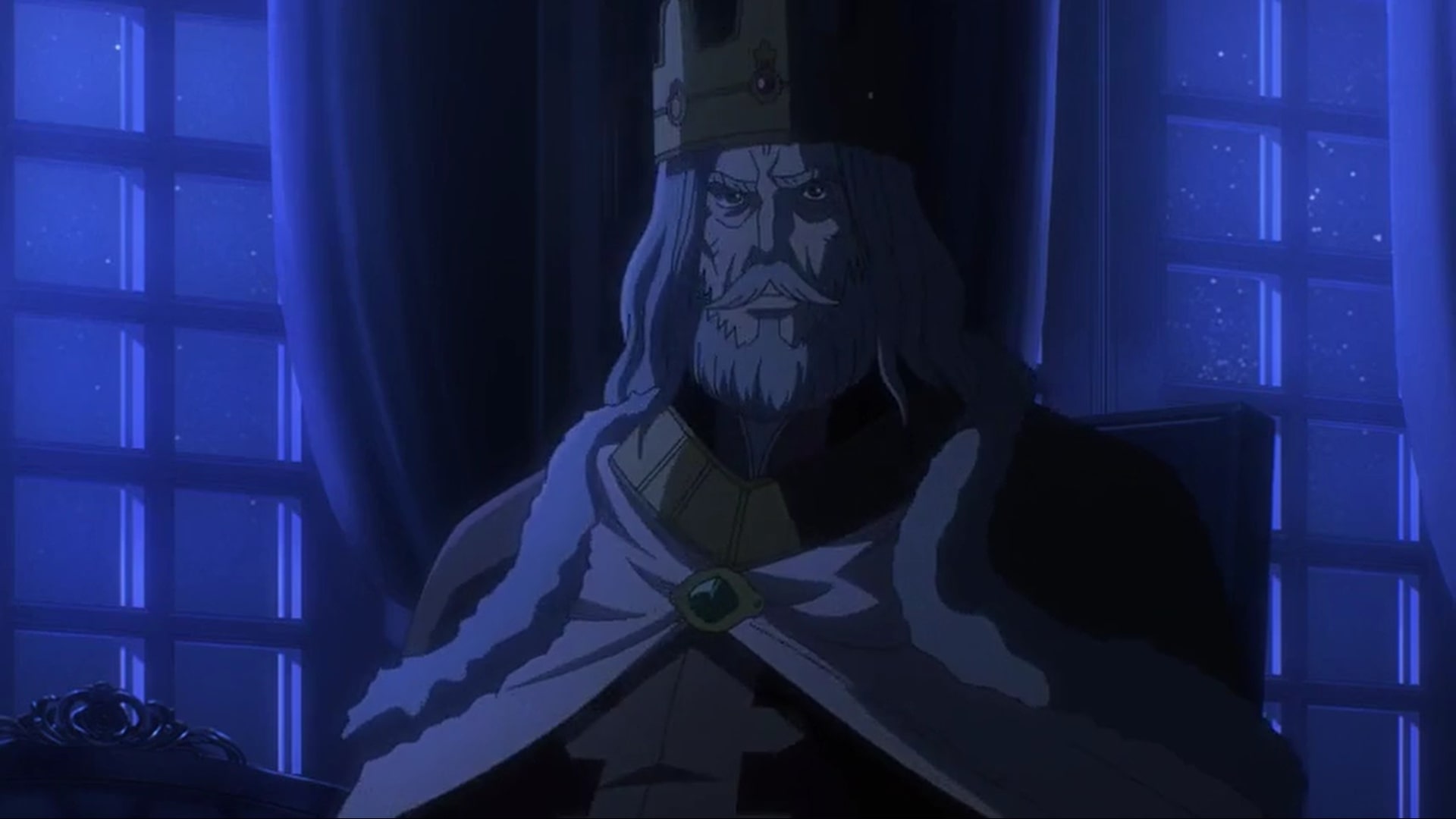 Despite knowing that the capital will most likely be annihilated, the King refuses to leave or save his life. He is determined to fall with the Re-Estize Kingdom and to serve it till his last breath. Meanwhile, Aainz and Albedo are strategically waiting for the arrival of the high-ranking adventurers so that they have a good idea of their enemy’s strength before launching a full-scale attack.

An adamantite-ranked adventurer finally shows up on the battlefield as Aainz and Albedo had expected. It turns out that he is none other than Azuth Aindra or the Red drop who has previously defeated death warriors during the invasion of the northern village and cities of the Re-Estize Kingdom.

As a high-ranking adventurer, Azuth appears to show no fear of Aainz or Albedo and attacks them directly. Unfortunately, his attacks have failed to leave a single scratch on them. While this shocks Azuth, Aainz tells Albedo to attack with a clear instruction that their ultimate goal is gathering as much intel as possible and not necessarily the victory. With this in mind, Albedo approaches Azuth, who is already panicking. When she finally managed to confront him, she repeatedly asks him to reveal his identity. 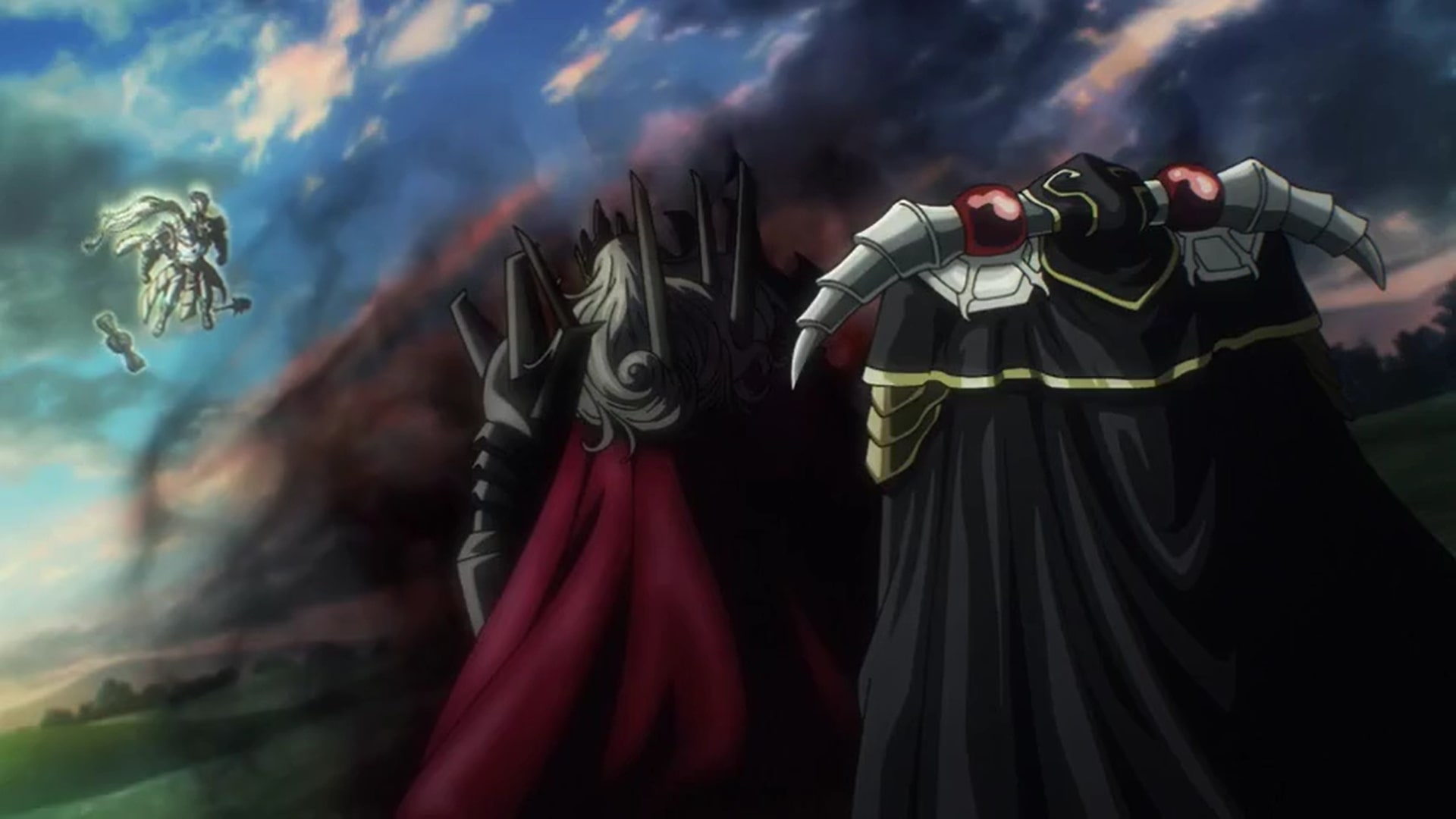 When she calls him a savage, Azuth finally replies and argues that the real savages are the soldiers of the Sorcerer Kingdom who have been slaughtering innocent people for nothing. Unfortunately for him, Albedo is not interested in or affected by any emotional arguments. Meanwhile, someone tries to attack Aainz, who is standing on the ground watching Albedo and Azuth’s fight unfold. Luckily, he is able to defend himself using the mines that he has placed around him in advance.

While this pushes his enemy back, it eventually causes no visible damage. When Aainz asks for the attacker’s name, the man behind the white shield introduced himself as Riku Aganeia. Aainz immediately recognized that he used to be one of the thirteen heroes. Although he appears extremely confident as the fight begins, Riku slowly turns the tables and delivers some painful blows to Aainz. In some instances, Aainz for the first time appears unsure about his next move, which is rare for someone like him.

However, as the intensity of the battle increases, Aainz bows in front of Riku to stop him and argues that he does not really want to fight him. He offers him a chance to join the Sorcerer Kingdom but Riku refuses. Riku genuinely believes in the fight for the greater good even if the chances of victory are slim. While they are having this conversation, Albedo finally returns and seeing Riku disrespecting Aainz, immediately attacks him without a moment’s doubt. Since the fight is now two-on-one, Riku does the smart thing and runs away. 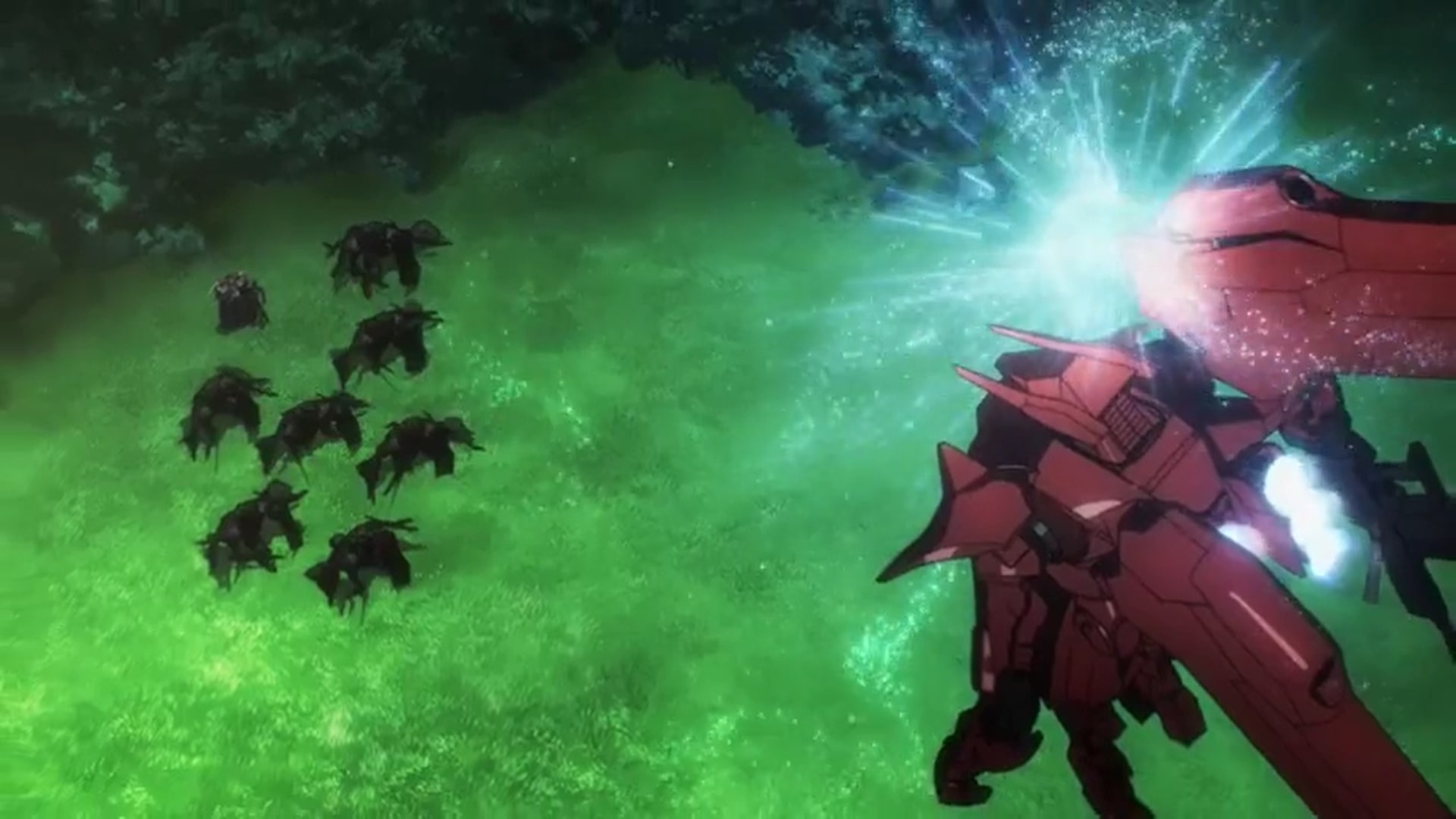 When he later meets Azuth, he learns that the top Re-Estize kingdom adventurer barely managed to save his life. By now both of them have come to terms with the harsh reality that the kingdom will soon be annihilated as there are no more warriors who can stop Aainz and his dark forces. Meanwhile, Aainz finally meets Pandora’s Actor for intel and it turns out that the former never went to fight. In fact, Pandora’s Actor disguised as Aainz so that he can fully understand the true powers of the enemies that they were facing. It was a great strategic move on Aainz’s part but it appears that his enemy is just as smart as Riku’s white shield was actually hollow and was remotely controlled for the purpose of collecting intel as well.

Is Riku Aganeia Just an Alias? Who is the Warrior Behind the White Shield? 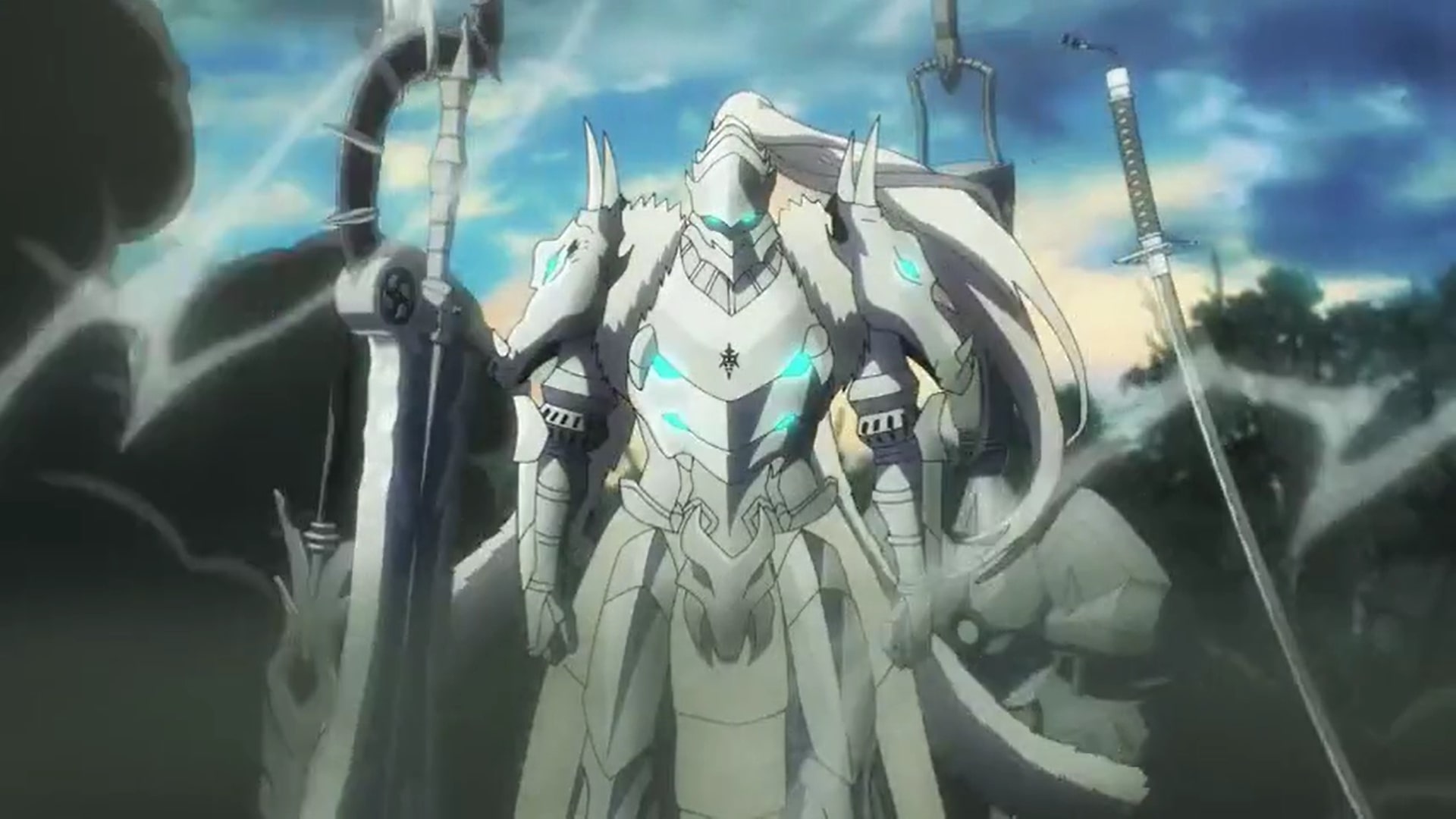 Yes, Riku Aganeia is just an alias and the white warrior shield is actually empty just as Pandora’s Actor had predicted following his battle with it. It turns out that it is controlled by none other than Tsaindorcus Vaision, the former member of the thirteen heroes and son of the Dragon Emperor. He appears to hold a lot of influence as he goes as far as considering the possibility of killing Azuth so that someone stronger and more loyal can be granted his powers. Unlike other heroes who have made their appearance so far, Tsaindorcus is a bit more strategic and powerful. While it’s highly unlikely that he will defeat Aainz in the future, it can be argued that he won’t go down easily like others.