Are Poppy and Bitsy Together in Riverdale? Are Betty and Cheryl In Love?

The sixth season of the CW’s ‘Riverdale’ embraces the genre of teen horror and posits its main characters against the backdrop of supernatural phenomena. Thus, the 5-episode event of ‘Rivervale’ explores an alternate version of the OG town which is comfortably nestled in the arms of magic but features harrowing interactions, both romantic and platonic, between mortals and paranormal creatures.

In the season’s fourth episode, we see three different timelines as the stories of Abigail, Poppy, and Cheryl — Blossom women from different historical periods — are examined. Sabrina, the witch, visits Rivervale and Cheryl performs an important spell with her to free Abigail’s soul. Meanwhile, we get to see the romantic endeavors of Cheryl’s ancestors. In particular, the dynamic between Poppy (Madelaine Petsch) and Bitsy (Lili Reinhart) is quite fascinating. But what about Betty Cooper and Cheryl Blossom? Here’s everything you need to know about the romance between Poppy and Bitsy as well as Betty and Cheryl.

Are Poppy and Bitsy Together?

In the year 1957, Poppy Blossom hosts salons to have invigorating conversations with the women of Rivervale. Bitsy, Velma, and Tammy frequently visit Thornhill and discuss their marital troubles because Poppy provides them with unconventional but empowering solutions.

Thus, Bitsy explains to Poppy her predicament with her husband, Jack. Bitsy is unhappy in her marriage but Jack is insistent that they have another child to sort out their troubles. Since Bitsy’s first pregnancy was extremely difficult, she is unwilling to have another baby. Poppy listens to Bitsy’s problems with compassion; however, Bitsy balks at her suggestion of divorce since Jack is a staunch Catholic.

However, Poppy comes up with an innovative solution involving birth control. She asks Bitsy to use ginger root flakes as a contraceptive. As Bitsy profusely expresses her gratitude, the mood changes between the two women. Bitsy and Poppy hug and ultimately kiss each other. A few seconds later, Bitsy jumps back in horror as she is terrified of accepting that she might be into women. We realize that both Bitsy and Poppy have been harboring romantic feelings for each other for a while. Poppy, with her fearless personality and rebellious nature, actually embraces her sexual orientation.

Later, Jack and Bitsy pay Poppy a visit. Jack threatens Poppy, asking her to stop filling Bitsy’s mind with radical and dangerous ideas. We realize that Jack has figured out that Bitsy is using ginger root to avoid pregnancy. He forces Bitsy to tell Poppy that she is happy in her marriage and desires another child. As Poppy looks on miserably, Jack tells her that he’ll kill her if she comes near Bitsy again. Before leaving, Bitsy mouths an apology to Poppy. Unlike Poppy, Bitsy is unwilling to stand up to dominating men.

Later, Poppy gets arrested because the people of Rivervale suspect that she’s a communist. Whilst she’s in prison, Bitsy visits her and asks her to sign the confession form to secure her release. However, Poppy is unwilling to compromise on her principles and tell a lie. In anger, Bitsy accuses her of not caring about their relationship and calls her a “sad, sexually repressed spinster.” Clearly, she’s upset that she cannot help Poppy and is angry at her for not wanting to escape at any cost. Bitsy also reveals that she’s pregnant and has accepted the rule of her husband.

Nine months later, Jack rushes to Poppy, who’s still behind bars. He begs her to assist Bitsy with her difficult delivery and promises her freedom from jail if she does so. Poppy, determined to be with Bitsy, goes to the hospital and helps Bitsy deliver a baby girl just as Bailey’s comet passes over Rivervale. Afterward, the two women embrace.

Bitsy wishes the world could have been a better place for her daughter and Poppy assures her that it will be. Before leaving, Poppy gives her a pouch and tells her that she’ll know when to use it. When Poppy returns, she’s put under house arrest by Constable Keller. Later, Bitsy makes use of the contents of the pouch. Thus, Bitsy and Poppy aren’t together, as societal norms and personal circumstances prevent them from being in a lesbian relationship. However, they certainly are in love with each other.

Are Betty and Cheryl In Love?

Although Bitsy and Poppy are in love, their descendants Betty and Cheryl, respectively, are not. Betty, who was with Jughead previously, is in a relationship with Archie whilst Cheryl is single, although she used to be Toni Topaz’s girlfriend. Bitsy and Poppy do not end up together either, as Bitsy spends her life taking care of her two children and Poppy spends hers in solitude due to her house arrest. 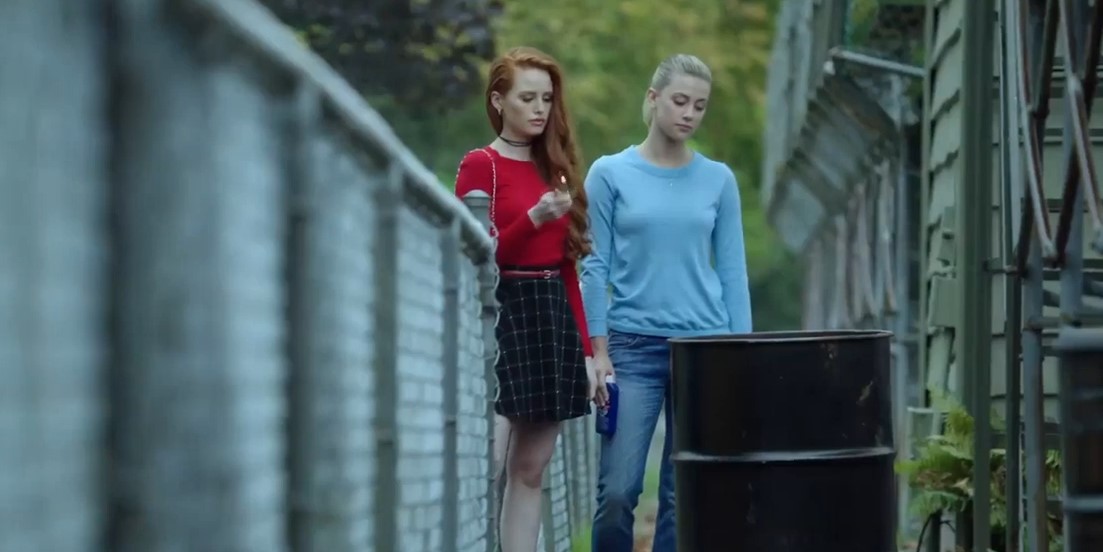 However, Bitsy makes use of the contents of the pouch — poison — that Poppy gave her during her delivery as a means of escape from her husband. Bitsy kills Jack by adding the pouch’s poison to his tea. Thus, she attains freedom from her abusive and cruel partner, ensuring a better future for her children and descendants, such as Betty.

In ‘Riverdale,’ we see how strong and independent Betty and Cheryl are, with the former being an FBI agent and the latter a businesswoman, pagan leader, and archer. We certainly have Bitsy and Poppy to thank for their unapologetically feminist personalities. Additionally, Betty and Cheryl are third cousins, since their great-grandfathers were brothers. Although Betty and Cheryl are rivals, they often support each other during dire times. In ‘Rivervale,’ Betty makes use of Cheryl’s pagan knowledge and rituals to conceive a baby, indicating that she trusts her distant cousin.

Read More: Why is Sabrina Spellman in Rivervale? Is Sabrina Dead or Alive?