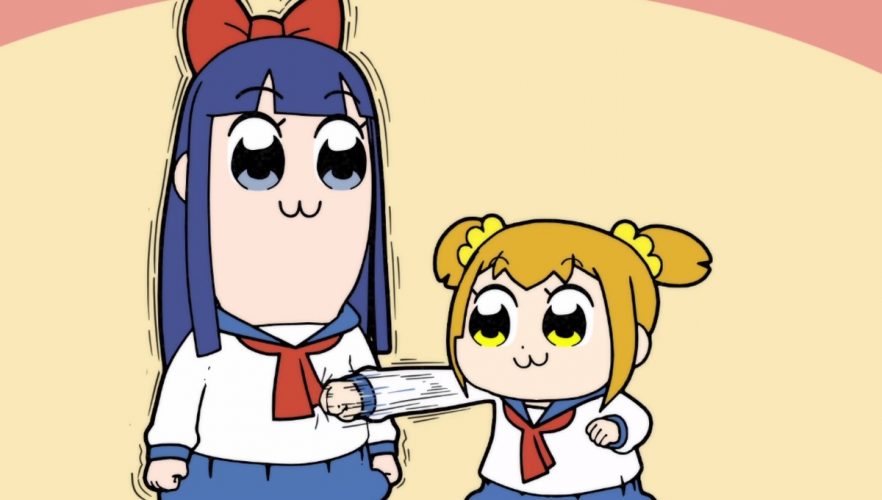 Pop Team Epic (also known as Poputepipikku in Japanese) is a comedy anime television series which is based on a manga series of the same name. Written and illustrated by Bkub Okawa, the manga series began serialization on the Manga Life Win website on August 14, 2014, and new chapters are being published even to this day. The manga follows  two 14-year-old girls named Popuko and Pipimi and their misadventures. The manga became quite a pop culture phenomenon and led to frequent parodies. Due to its surrealism and absurdity, it has developed a cult following among both Japanese and Western audiences

Four years after the manga series began serialization, a Japanese animation studio called Kamikaze Douga announced plans to adapt it into an anime television series and Season 1 of Pop Team Epic premiered on January 7, 2018, much to the joy of fans of the manga series. The show, which received decent ratings, was deemed to be a success by fans of the manga series and new viewers alike and since then, fans have been waiting to hear news on a second season. Here’s everything we know about the prospects of Pop Team Epic Season 2 thus far.

Pop Team Epic Season 2 Release Date: When will it premiere?

Pop Team Epic season 1, consisting of 12 episodes, premiered on January 7, 2018 and ran till March 25 of the same year. Less than a week after Season 1 finished airing, Kamikaze Douga released a special episode, meant to serve as a follow-up to Season 1. Apart from this special episode, Pop Team Epic has seen several spin-off shows and specials being made and as it stands, the show has three such spin-offs – the three-episode Pop Team Epic Specials, the single episode Ninja Batman x Pop Team Epic Kindan no Collab CM Eizou Kaikin!, and a single episode original net animation (ONA) special titled Pop Team Epic Kinen. However, in spite of all these spin-offs being made, a second season has not been confirmed yet.

Although a non-renewal for now might seem worrying, there’s actually no reason to get worked up if you’re looking forward to a new season of the show. There’s plenty of time left for a renewal to be announced. If Kamikaze Douga does not announce a renewal by 2021, there’s probably some reason to worry, but we think a renewal will be announced before that. The manga series, after all, has been running since 2014, and Season 1 only covered a section of its plot. Thus, as it stands, there’s a good chance of the show being renewed for a second season, especially considering that there’s more than enough source material on which the second season can be based. Our best guess is that Pop Team Epic season 2 release date could fall sometime in 2020 or 2021. We will update this section as soon as we hear more.

For those who like watching anime shows in English, the good news is that Pop Team Epic has a great English dub which was made keeping the show’s international fanbase in mind. If you want to watch the show in English, you can find dubbed episodes on Crunchyroll, Funimation, and Anime-Planet.

Read more in anime preview: Phantom in the Twilight

With episodes spanning just 12 minutes each, Pop Team Epic does not have an overarching plot but instead has small, episodic plots for each episode.

In particular, the show chronicles the misadventures of two 14-year-old school girls named Popuko and Pipimi, who, for some reason, repeatedly encounter mundane yet bizarre situations, and respond to them in equally bizarre and absurd ways. In essence, the show is an episodic absurdist comedy and is filled with surreal humour. Further, the show, like the manga, is known for its parodies of pop culture, and as a result, it has developed a cult following, both in Japan, and in the West. These parodies, more often than not, are interlaced with comedy, drama, action, and plenty of swearing, and you’re sure to enjoy the show, especially if you’re up to date with what’s happening in the world of pop culture.

As is evident from the section above, Pop Team Epic has only two main characters. Below, we’ve provided you with brief backgrounds on each of them.

Popuko: One of the two main characters in the show, Popuko is a 14-year-old middle school girl who is distinguishable for her show, light orange hair and yellow irises. Although Popuko comes across as a cute middle schooler, she is shown to have a short temper and is quick to anger, even at the smallest of provocations. Apart from her short temper, Popuko is also shown to have a tendency towards violence, and can be quick to attack anyone without a second thought. Popuko’s weapon of choice in combat is a bat embedded with nails. In spite of Popuko’s sociopathic nature, however, she is shown to have a soft corner for Pipimi and genuinely cares for her. It’s also hinted numerous times that Popuko has romantic feelings for Pipimi.

Pipimi: The second main character in the show, Pipimi is also a 14-year-old middle schooler who happens to be Popuko’s best friend. Standing distinctly taller than Popuko, Pipimi can be distinguished by her long navy blue hair and her blue eyes. In spite of being Popuko’s best friend, Pipimi is the polar opposite of her in terms of her personality. While Popuko is short tempered and violent, Pipimi is shown to be a calm, collected and stern person who often checks Popuko’s violent tendencies. Further, unlike Popuko, Pipimi has a strong control over her temper and hardly gets angry, even when provoked severely. Pipimi is also likeable in the sense that she has genuine concern for those around her, and is always trying to stop Popuko from inflicting harm on others. However, in spite of their contrasting personalities, Pipimi deeply cares for Popuko and can even become a violent person if Popuko is threatened by others.