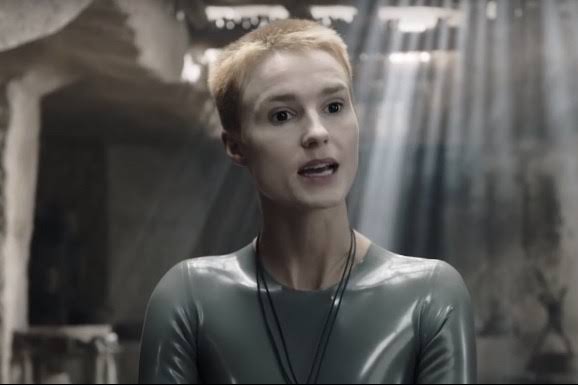 ‘Raised by Wolves’ is HBO Max’s latest science fiction venture, directorially helmed (for the first two episodes) by undisputed sci-fi stalwart Ridley Scott. In the first episode of ‘Raised by Wolves’, we met Mother and Father, two androids sent to populate the planet Kepler 22-b with the human species. After a strange illness befalls five of their children, Campion remains the sole survivor.

The second episode of ‘Raised by Wolves’ begins with a flashback to bleak, dystopian Boston, where the war between a cohort of religious believers, the Mithraic, and the atheists is reaching breaking point. In the midst of all-out war, a man and woman who identify as atheists attempt to seek shelter. They happen upon a medical droid, whose mundane politeness brings some much-needed humor to a morbid plotline. They soon realize that the droid is their ticket out of the hellhole that Earth is chalking up to be. Knowing that an Ark of the Mithraic, fittingly called Heaven, is ferrying devotees away from the planet, they enable the droid to perform plastic surgery on them. Donning the faces of two Mithraic believers, Marcus and Sue (whom they kill in cold blood), the couple board Heaven. While boarding, they meet the real Marcus and Sue’s son, Paul, who appears to remain oblivious to their transformation.

The fake Marcus had, in fact, made an appearance in the first episode, in the present timeline, as part of the Mithraic exploration committee sent to Kepler 22-b. He was presumably struck dead by Mother, but managed to survive. In the second episode, we see Marcus roam the expanse of Kepler-22b trying to find shelter and warmth in the cold, dark of night. Marcus’ ‘son’, Paul (and the four other children whose Mother carted along), is just miles away from a clueless Marcus.

The children, who make for a mostly devout bunch, are wary of the androids and keep to themselves. Apart from Paul, the outfit includes Vita, Holly, Tempest, and Hunter. Hunter considers himself the ringleader of the bunch and is adamant in his religious beliefs. Vita and Holly are the most reserved of the lot. Tempest, as Mother later joyfully learns, is pregnant. Tempest reveals to the mother that a priest on board the Ark raped her and several others even as they remained in stasis.  Mother, in true maternal fashion, vows to nurture Tempest and her baby and provides her with special accommodation in the dome.

Now that her once-fractured family is whole again, Mother realizes that she’ll need all the help she can get. By transplanting a central processor from another android, Mother revives a stunned Father. Campion is resplendent at the sight of Father and we experience a rare moment of joy in the otherwise somber series. To protect the children from her newfound prowess, Mother also transplants her own eyes, where the source of her power truly lies. Despite this, Campion remains perturbed by her abilities and urges Father to destroy her eyes the first chance he gets.

Despite a slow start to the episode, it picks pace at the ending and how! In the dead of night, the androids discover foreign beasts roving the land for their next meal. As Mother rushes to pulverize them with her eyes, she realizes they’re nowhere to be found. The androids quickly identify the culprit: Campion. Meanwhile, the creatures have tracked down Tempest and are preparing to maul her to her death. It’s a race against the clock as the androids rush to retrieve Mother’s eyes, their saving grace, from Campion. In what shapes up to be a truly nail-biting scene, Mother recovers her eyes from Campion’s keep, transforms into a spine-chilling killing machine, and with a couple of terrifying shrieks, turns the beasts to dust.

While the androids have neutralized the present threat to their settlement, someone else is in danger: Marcus. Marcus, who had eventually curled up behind a rock near the deep trench, sleeps blissfully unaware. The creatures take no time to notice him and end up jostling him into the pit. The only thing separating him and the bottom of the pit is the flimsy rope he tied around himself and to the rock. Fortunately, help arrives quickly and Marcus is rescued from what could have been a tragic end.

Why do the creatures come out in the open twelve years later?

With little to go on, the best we can do is speculate. Our best bet is that the explosion created by the crash of the Ark drew the attention of the creatures. Upon realizing that the settlement contained easy prey, they made their way there.

Who are the men who rescue Marcus?

The men who rescue Marcus are members of the Mithraic creed. Given the fact that an entire spacecraft of theirs went up in flames, the remaining Mithraic would undoubtedly have come to seek revenge.

Each episode multiplies the number of questions ‘Raised by Wolves’ poses. How will the androids secure the safety of the six children from the prowling creatures out for blood? Will Marcus find his way back to his atheistic roots or did he never lose them in the first place? How much of a challenge will the entry of the Mithraic cohort pose to the to androids and their beloved settlement? The next episode will hopefully come bearing answers.