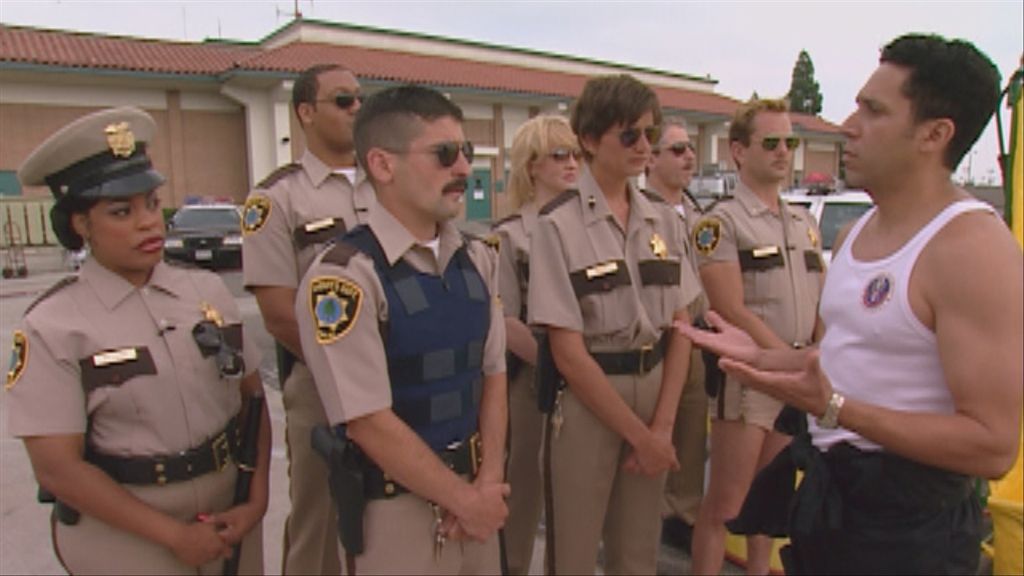 Cop shows are a standard part of our viewing staple, and many happen to be serious glimpses into the state of law enforcement agencies in the USA. ‘Reno 911!‘ turns the entire trope on its head by satirizing law enforcement documentaries, especially ‘Cops.’ The series is mostly improvised and unscripted, leading to genuinely hilarious moments as we see comedians play the parts of cops.

The premise follows members of the Reno Sheriff’s Department, as they try to capture an assortment of criminals. However, the individual quirks of the characters and their funnily disastrous teamwork allow the bad guys to get the better of them. That said, ‘Reno 911!’ shines a light on pertinent issues like substance abuse, corruption, racism, social and economic problems.

Many viewers have noted that the Reno Sheriff’s Department is fictitious since the actual law enforcement body there is the Reno Police Department. Naturally, this might make you curious about where ‘Reno 911!’ has been filmed. We have got you covered in that regard.

‘Reno 911!’ has been filmed mostly in and around Los Angeles. Despite the title suggesting that the series is set in Reno, the Nevada city has only been used for establishing shots. Most of the filming actually takes place in Los Angeles, Carson, California, and parts of Oregon. Notably, scenes have also been filmed in Santa Clarita. Now, let us take you into the specifics of the show’s filming locations.

Most of the scenes in ‘Reno 911!’ are filmed at Carson. This is primarily because the real-life location of the Reno Sheriff Station is the LA County Sheriff Station at 21356 Avalon Blvd, Carson. Not many changes have been made to the filming spot since it is actually a police station. Check out a tweet about a fan pointing out that the series has been filmed in Carson.

Off today & chillin, so just watching some TV… Just caught a scene on Reno 911 filmed at Carson sheriff station

Los Angeles is an obvious filming choice for an unscripted series like ‘Reno 911!.’ Since budget is always an important factor, the city of angels becomes a preferred spot due to the easy availability of extras, and the presence of trained professionals to help in the post-production process. Check out a call for stunt actors required while the series was filmed in Los Angeles.

In the show’s reboot, it appears that scenes at the police station are no longer filmed in Carson. Instead, filming has shifted to the Santa Clarita Valley Sheriff’s Station. It is located at 23740 Magic Mountain Parkway. You can also check out an official tweet from the sheriff’s station, confirming the show’s been filmed on location.

According to reports, the cast members have also been spotted at Piru, a historical unincorporated town in the Santa Clarita River Valley. We know that scenes have been shot at the Newhall Mansion at 829 Park St, Piru.

In conclusion, it seems that the series might be set in Reno but has filmed mostly in the Los Angeles area. The resources, on hand, aid the production process, helping ‘Reno 911!’ deliver the humorous content effortlessly.