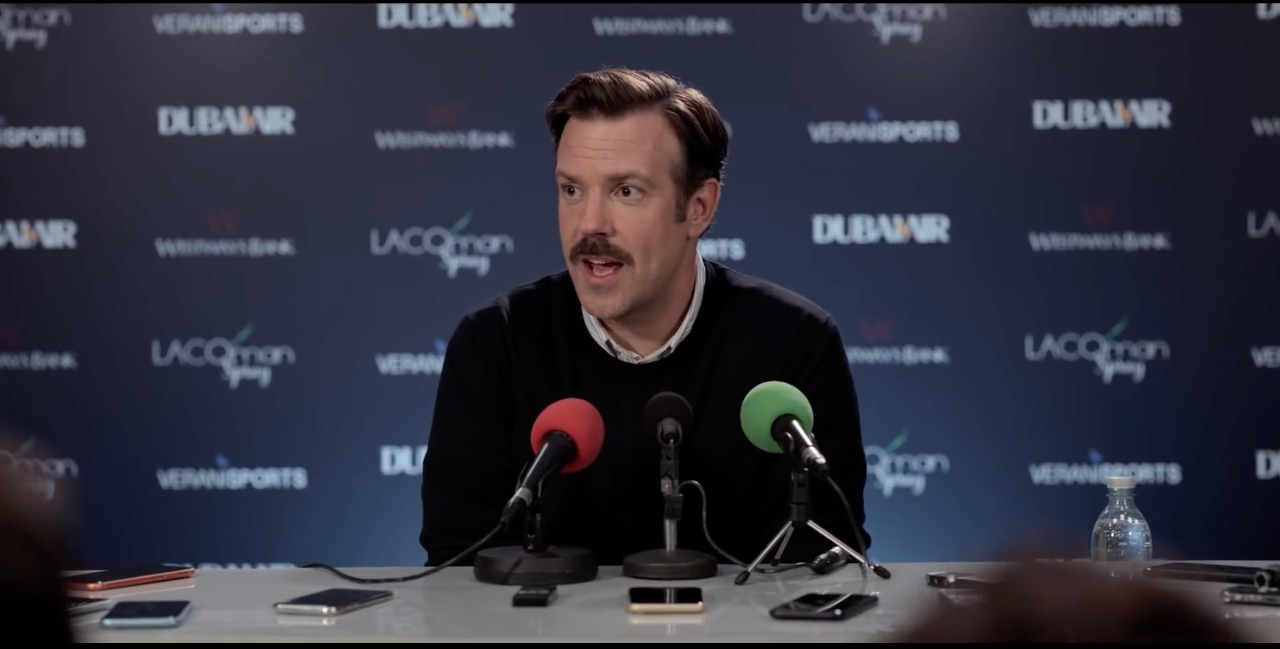 ‘Ted Lasso,’ on Apple TV+, is a sports comedy that stars Jason Sudeikis as an American college football coach who is hired to be the manager for the English soccer team AFC Richmond. The series follows the trials and tribulations that he faces as he puts his best foot forward to lead the team to success.

Recently divorced Ms. Rebecca Walton fires the team’s current manager, George, and buys out the remainder of his contract. She does this because of his subpar performance and the fact that she does not like him one bit. Ted Lasso is then hired as the manager, based on the fact that he led a horrible team (although they played American football) to victory, winning them the national title.

Ted Lasso travels to the UK with his friend and colleague, Coach Beard. On the plane, a football fan recognizes him but calls him crazy for taking the job due to the pressure he will eventually face. However, it seems that Ted is not fazed out one bit. The pair arrive in the UK and even visit Tower Bridge.

The Kansas native then meets with Rebecca at the stadium. She gives him a tour of the place, after which he is immediately thrust into a press conference. His inept knowledge of the game causes both the reporters and the fans to loathe Ted from the very beginning. One reporter even asks him if his employment is a joke. However, Rebecca comes to his aid and defends her new approach by calling it “The Lasso Way.”

It turns out, however, that Ted is just a pawn in the bigger game that Rebecca is playing. She wishes to completely destroy the club’s reputation. You see, her ex-husband, who cheated on her with multiple women, really loves the team with all his heart. So naturally, she thinks that this is the perfect revenge against him. She even offers her employee, Higgins, a promotion as the new ‘Director of Football Operations’ for his help, and while he does like Ted, he (begrudgingly) accepts.

Coach Beard and Ted observe the team’s training session, and they then introduce themselves when the players are in the locker room. Ted’s debut doesn’t really make an impact on them, and they are as nonchalant as ever. The midfielder and team captain, Roy Kent, even says that he never thought he would be coached by “Ronald McDonald” after Lasso complemented his career trajectory.

Ted goes back to the apartment and talks to his family back home. It is then revealed that despite his positive facade, not all is well in his personal life, especially his marriage. The episode ends with him being unable to fall asleep.

The premise of ‘Ted Lasso,’ may not be the most groundbreaking one, but it is executed well. There have been multiple sports comedies where different cultures have been merged, the biggest example of which is ‘Bend It Like Beckham.’ While the show may not become a cult classic like the aforementioned, they do a good job of infusing the vernaculars and ideology of the two countries. In fact, one could even say that this delicate balance is what carries this episode.

The writers of the show had every opportunity to fall back on those stereotypes that are prevalent for both the nationalities. Fortunately, however, they steered clear of this path. Yes, they may have included the coffee versus the tea debate in the episode, but it solely serves to be comic relief. They did not write Lasso’s character as just another dull white man from the South, and they extended the same courtesy to the British characters.

What really makes you keep watching the episode is Jason Sudeikis’s interactions with the English. He is the epitome of southern American charm and kindness, and this quality of his has been contrasted well against the more blunt and direct British characters. The show uses a balanced melange of Lasso’s particular brand of American humor with the Britishers’ frankness.

Last but not the least, their accurate portrayal of the truthfully verbose football community around the world is commendable. If you are a fan of lighthearted comedies, then you will definitely like this show.