Rhino on ‘The Masked Singer: Clues and Guesses 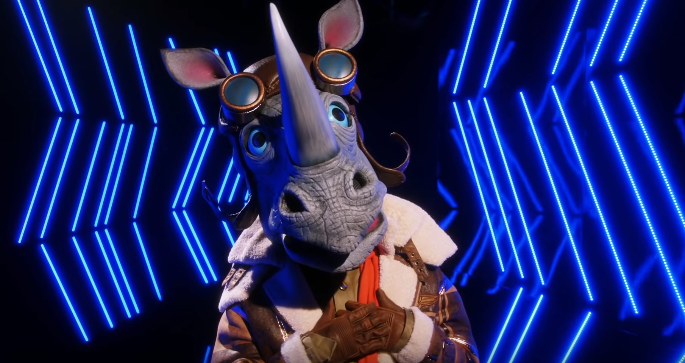 ‘The Masked Singer’ Season 3 has introduced us to some spectacular performers. Now that the group stages are over, we have gotten the chance to see the champions battling it out in the Super Nine. As we head towards the smackdowns, one cannot help but think of who might be eliminated next. On that note, Rhino has had a jittery start in the Super Nine stage. He placed at the bottom of Group C but has a chance to turn it around in the upcoming episode.

We will surely be hoping for as much, from a performer who’s amazed us on previous occasions. Dressed in an old-school aviator outfit, Rhino has a good voice and energetic stage presence. Naturally, you might be curious about who Rhino is. We have got you covered with all the clues and guesses about Rhino right here.

Rhino starts his super nine clue package saying that he wants to perform his most dancey song yet. Due to his size, Rhino has often been confused as an athlete on the show. The performer eagerly clears this up, mentioning that he is a musician who has been on the Billboard charts. Rhino says that he tried to be what everyone wanted him to be. However, he soon realized that real progress comes at the edge of the comfort zone. There is another reference to airplanes when Rhino says they are meant to fly, not stand still in the hangars.

For his super clue, Rhino reveals a slot machine. He says that it does not just mean he is a risk-taking gambling type. Some other possible hints in Rhino’s package is that he gives us this clue for a ‘quarter,’ and says that people might even have one of his albums.

He performs “What a Man Gotta Do” by the Jonas Brothers. After his performance, Rhino clears the air about one thing he is not. He states that he is not as tall as people believe him to be. You can check out the clue package below.

So far, we have maintained that Rhino might be Barry Zito. While Zito was one of our answers, the latest clue package seems to strengthen our deduction. The slot machine refers to Las Vegas, the gamblers’ paradise of the USA. Well, Zito was born in Vegas, which is what it might be referring to here.

Moreover, from previous clue packages, we know that performing for a king is in Rhino’s blood. Well, Zito’s parents did play for Nat King Cole, which is what is hinted at here. Rhino’s repeated insistence that he is a musician tie in with Ztio’s skillsets, as a singer and guitarist.

Moreover, Zito has performed at the Grand Ole Opry, which we see in an earlier clue package. For Rhino, his wife seems to be an essential factor, who helped turn his life around. Well, Zito was at a low point when he was benched during the World Series, which was around the same time that he met his wife. However, it remains to be seen how this factor ties in with Rhino stating that he is not an athlete. Nonetheless, netizens seem to be sure it is Zito. You can check out a tweet below.

With so many clues about the South, some fans believe that Rhino might be Tyler Hubbard or even any other member of Florida Georgia Line. You can check out a tweet claiming Rhino is a member of the band.

For now, Zito seems like the best bet. However, with the competition mounting, Rhino might be unmasked soon, and we will get to see who is actually behind the cool aviator outfit.

Read More: Who is Night Angel on Masked Singer