Night Angel in ‘The Masked Singer’: Clues and Guesses 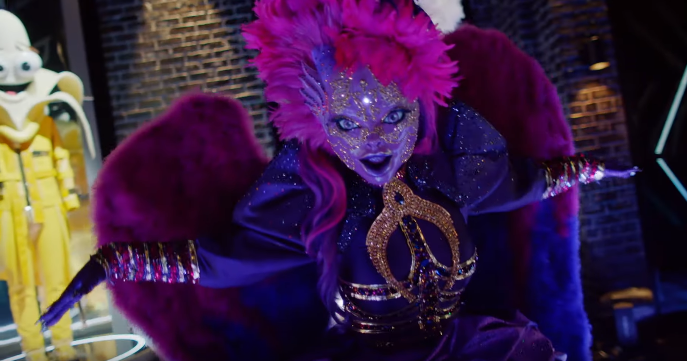 ‘The Masked Singer‘ Season 3 has moved past the group stages, and wrapped up the Super Nine pool. It has given us a chance to see the champions from each group face off. Now, we are headed to the familiar format, with performers paired together. You might be wondering about who’s likely to make it to the end. Well, after hearing all the champions, there is little doubt that Night Angel is one of the most energetic performers this season.

With a tremendous vocal range and enigmatic stage presence, Night Angel just might be the winner, though it is too soon to call it. Naturally, this might make you wonder about who she is. Don’t worry, we have all the clues and guesses surrounding her identity, right here.

In her Super Nine Clue Package, Night Angel says that the show allows her to embrace the spotlight. She opens up about her fear, which developed due to being rejected at an early stage of her career. Furthermore, she tells us that she’s avoided being at the front and center for this very reason.

Her super clue is a tricycle, and Night Angel tells us that she intends to cruise by us with a tricky one. She performs ‘Rise Up’ by Andra Day. Since the Super Nine episode took place on April Fool’s day, each star also had to give a clue about what they are not, to dissipate doubts. Night Angel states that she’s not just a voice, but also a ‘mogul.’ You can check out her clue package below.

There is little doubt left that it is Kandi Burruss, the ‘Real Housewives of Atlanta‘ or ‘RHOA’ star, behind the Night Angel mask. Based on her Super Nine clue package, her fear of rejection early in her career could refer to the time she spent on stage, with Xscape. After her stint with the band, she took a break.

Moreover, the clue about the mogul aligns with Kandi, who has her restaurant, runs a company, and writes songs for other artists. The tricycle threw us off, initially. It might mean that Kandi is a triple threat, as a star, singer, and businesswoman. However, it could also be a veiled clue towards Kandi’s high school, Tri-Cities. It appears that a fan has reached the same conclusion, as you can see from the tweet below.

This is the one I know week after week on @maskedsingerfox!! #NightAngel is @kandi!!!! Tricycle clue is Tri-Cities High School!!! Gone Georgia Girl!@.! pic.twitter.com/S9uNOGeQDw

Night Angel has given out more clues about her high school, and Kandi seems just as fond of her time in school. One of Night Angel’s clue packages says that she had to skip high school events, including prom, due to her commitments to becoming a star. You can check out Kandi’s throwback post, reminiscing when she had to skip out right after graduation for an Xscape gig.

Again, the Lego clue addressed to panelist Jenny McCarthy, is another dead giveaway. Kandi was on Jenny’s show for an interview, and her Instagram account even has a picture of the two together. You can check it out here.

Moreover, Night Angel seems visibly pleased with the praise she’s getting, which might be because Kandi is being appreciated for her solo performances for the first time, on ‘The Masked Singer.’ Several other clues, from previous packages, also point towards Kandi being Night Angel. You can check them out here.

Therefore, Night Angel remains to be unmasked. It might be a while that we see the performer’s identity revealed because she’s one of the best participants this season. However, at this point, it would be safe to put our eggs in one basket, and state that Night Angel is none other than Kandi Burruss.

Read More: Who is Rhino on Masked Singer?