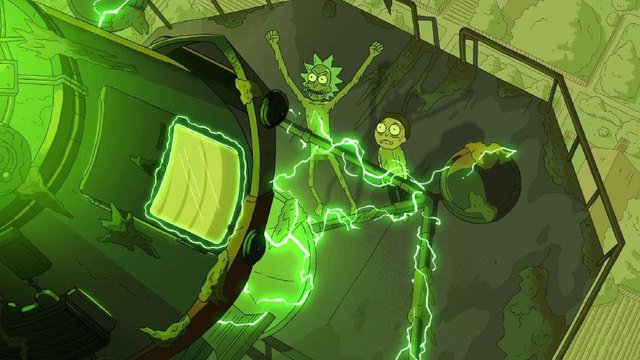 No matter which episode takes the title for the best of the season, ‘Rest and Ricklaxation’ is easily going to have it for the best opening of any episode of the series, ever. The cries of agony Morty lets out and the profane regrets Rick spews as the both of them sit wailing in their spaceship after finishing a highly dangerous mission and nearly dying: that is absolute comedy gold. Bloody brilliant stuff and fantastic voice acting by Justin Roiland. Even apart from that, it presents a story that is not too strange given that this is ‘Rick and Morty’ we are talking about, and all the regular trappings for which the series has acquired its popularity are present in sizeable amounts.

Among the “mind blowing”, “very best”, “regular”, “typical” and “meh” of the third season, I’d give it a “regular” tag, and that too a solid one. If you have ventured on here for the first time and have not the faintest idea about the rating tags that I am babbling about, head on over here to check my reviews of previous episodes of the third season of the series. Onwards to the plot now. 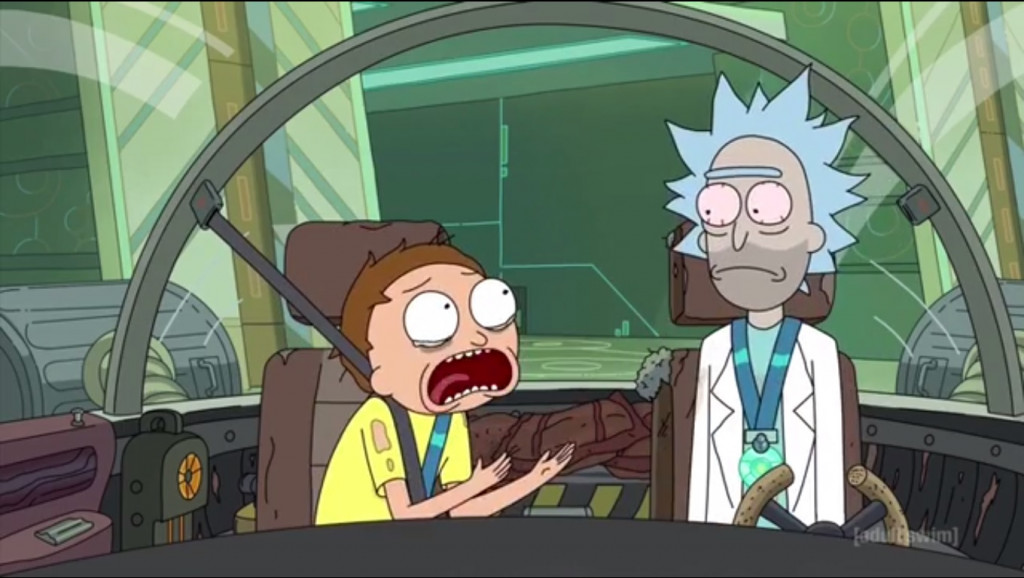 The episode begins in the most epic way for ‘Rick and Morty’, leave alone just this season, when both Rick and Morty break down in their spaceship following a six-day long adventure in an alien galaxy,   claiming it to be physically and psychologically taxing, even as Rick ignored Morty’s warnings prior to the adventure that they’d been going too frequently. Rick finally realises that the two of them needed a vacation, and visit an alien spa shortly after. While there, they volunteer to go into a psychological detox machine, that removed “cognitive toxins and purified the system”.

Rick and Morty unassumingly enter the machine which then goes on to separate the “toxic” parts of the two, Rick’s god complex and arrogance, and Morty’s self-loathing and under-confidence. Turns out that even their toxic counterparts had personalities of their own, and get trapped in the tank of the detoxifier in a hellish, swampy world full of toxins, of course situated inside the detoxifier itself. The Rick and Morty that exit the machine are different beings altogether, with Rick being more considerate than ever, and Morty having an unusual air of confidence around him, as a result of leaving their toxic personalities in the detoxifier. 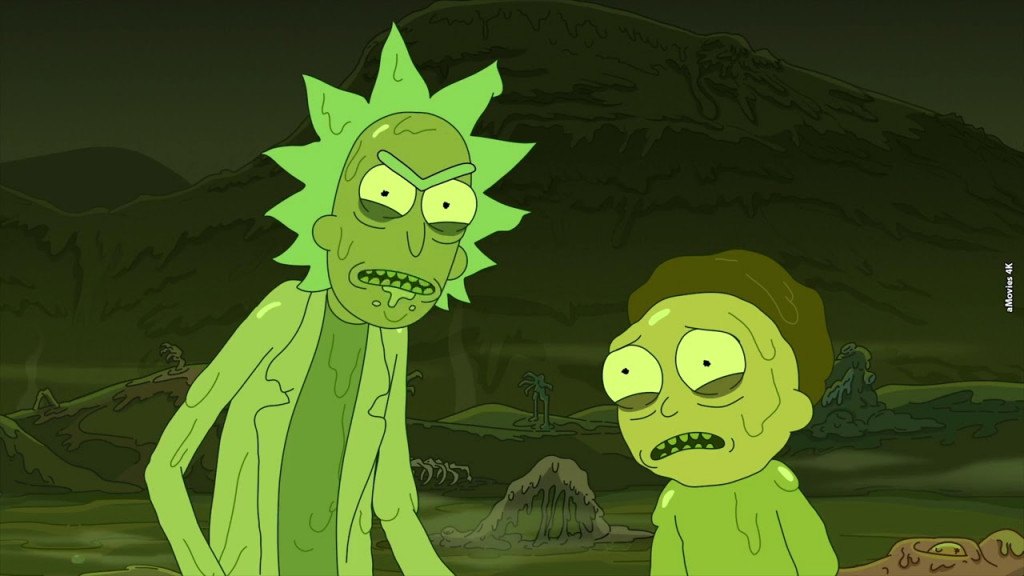 While toxic Rick continues to humiliate and demean toxic Morty, simultaneously looking for a way out, the detoxified Rick and Morty return to Earth and surprise everybody with their changed, positive behaviours; especially Morty, who wins over virtually every kid in the school, including Jessica, who agrees to go on a date with him. Meanwhile, in the detoxifier, as toxic Rick’s god complex intensifies, he discovers a new element that lets him harness the toxic equivalent of electricity, and is eventually able to send a distress call to the detoxified Rick on Earth. Morty ignores their cries for help, now comfortable in his new shoes, and goes on a date with Jessica, his long-time crush. The date obviously blows owing to Morty’s overenthusiasm about everything, but Morty picks up another girl at the bar, Stacy, and comes home, where Rick encourages and later enforces upon Morty that the two voluntarily retoxify themselves by fusing back with their toxic parts that healthy Rick now has in his possession from the alien spa, believing them to be alive and in that predicament because of them, another effect of the detox. 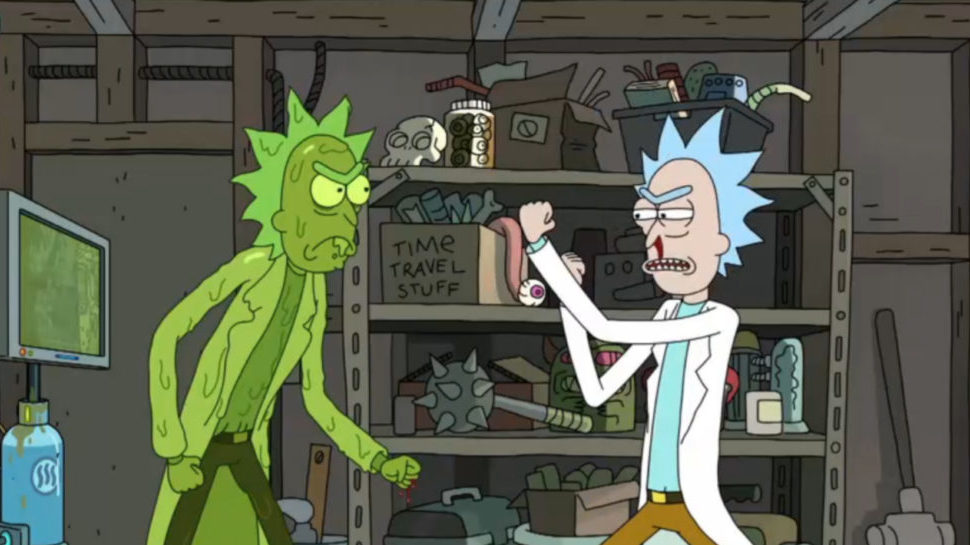 In the ensuing chaos, Stacy enters the booth meant to fuse the two back together, instead getting sucked into the toxic world of the detoxifier, while toxic Rick and Morty emerge free from the booth, revealing it to be a plot by toxic Rick to trap healthy Rick and Morty inside the tank, and carry on alone believing himself to be free of his sentimentality and irrationality. The two Ricks square off, and eventually toxic Rick flies off in his spaceship, with his plan to toxify the whole world if he couldn’t trap them inside it. He plans to execute it atop a moon light tower from where he plans to amplify and spread the toxins all over the world. He does so, and the world quickly starts to turn just as toxic as them, with Catholics renouncing their faith and children going on to brutally stab a clown at their party as soon as they are hit with a toxicity wave. Don’t look at me that way, this IS Rick and Morty after all. 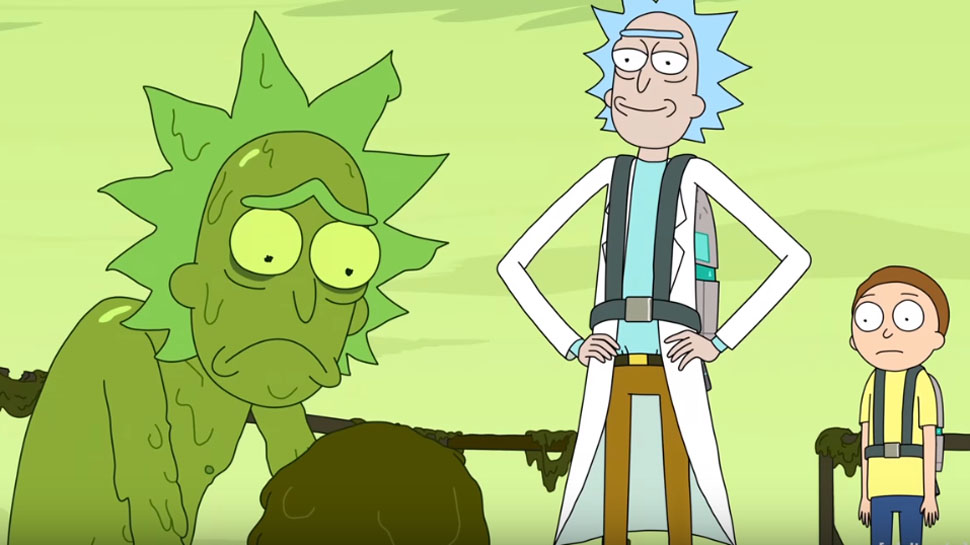 His attempts are thwarted by healthy Rick and Morty who have now realised that the machine only distinguishes between what’s toxic and what’s not based on the individual’s own definition of toxicity, further theorising that the sentimentality and the irrational attachments that toxic Rick considered a weakness would still be with him, seeing as though how they would be toxic to the “normal” Rick. Healthy Rick is able to avert the situation after shooting toxic Morty and besting toxic Rick to merge with him, while ‘healthy’ Morty quickly escapes and makes a life for himself as a stock broker. Weeks later, the original Rick is able to track him down and merge him with the remains of toxic Morty to have things return to normal. 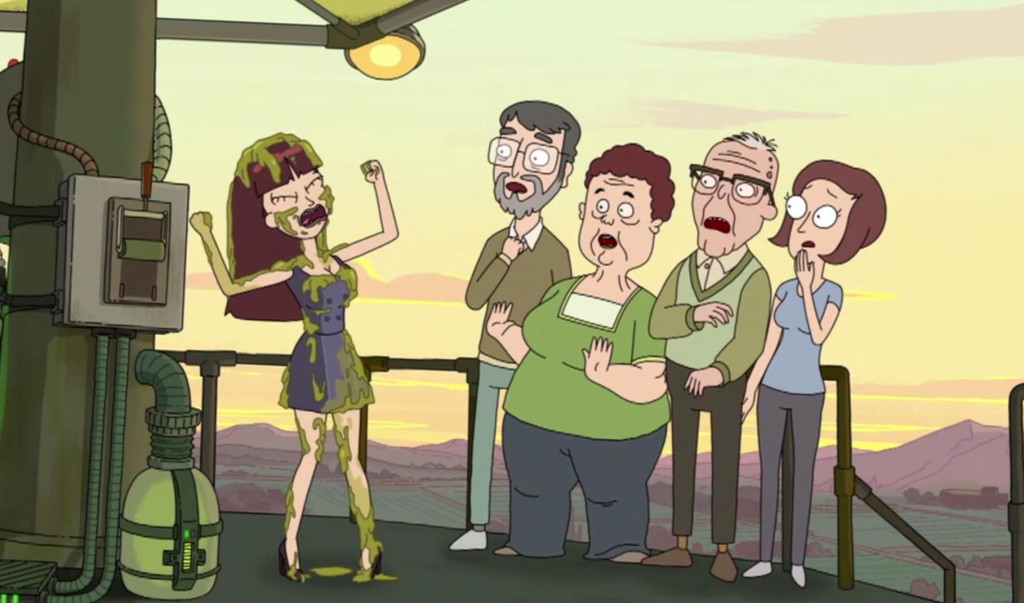 In a no consequences funny post credits scene, a tourist group viewing the moon tower accidentally free Stacy who was trapped in the toxic world of the detoxifier tank, as she emerges out and begins hysterically screaming “sea cucumber”, her and healthy Morty’s safe word from earlier on in the episode.

Even though I termed it a somewhat “regular” Rick and Morty episode, what sets it apart, as I stated, is the opening of the episode and an uber cool and confident 14-year-old stock marketer Morty. Coupled with a few standout moments, this episode is just nicely done overall, while maintaining some significant trademarks of the show, and a load of funny bits ranging from dark, slapstick to even outrageous.