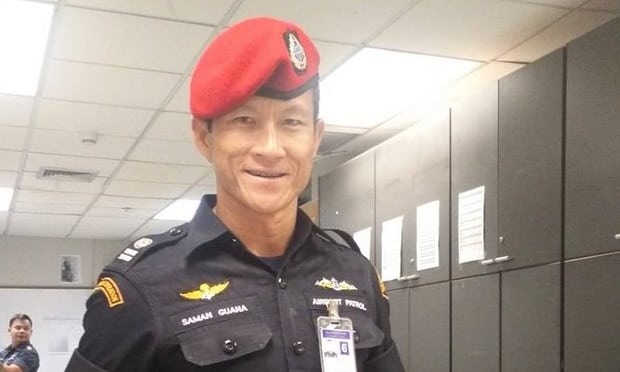 Amazon Prime’s ‘Thirteen Lives’ is about the rescue of thirteen people which brings together thousands of people from around the world. Twelve young football players and their coach are trapped inside a flooded cave. With every day, the chances of rescuing them decrease as the water level in the cave rises and the oxygen level decreases. Experienced divers from around the world assist Thai Navy Seals who were on the spot on Day 1. The film focuses on the entire thought process and the actual method used to safely bring out the people trapped inside the cave. While, eventually, their story gets a happy ending, there are some people whose lives are lost along the way. Saman Kunan was one of them. What happened to him? How did he die? Let’s find out.

How did Saman Kunan Die?

Saman Kunan died on July 6, 2018, due to the lack of oxygen. He was inside the caves where the Wild Boar team and their coach were trapped, placing air tanks on the way, which would later help in bringing the boys out safely. He was on his way back at one in the morning when he fell unconscious. It was later found that something with his gear had led to the trouble that eventually cut off his oxygen supply and resulted in his death. His diving buddy tried to help him, but by then, it was already too late. Following his death, Kunan’s body was sent to the Bangkok airport. He received a royal-sponsored funeral at his hometown in Roi Et.

The former Thai Navy Seal was a triathlete and a diver. He was employed at Bangkok’s Suvarnabhumi airport, having retired from the military in 2006. He was married to Waleeporn Kunan, who describes him as a person who “loved helping others, doing charity work and getting things done”. Even after his retirement, Kunan was in close contact with former colleagues who describe him as “a skilled and talented Seal and a triathlon athlete” who loved adventurous sports.

A couple of days after Kunan’s tragic demise, all the thirteen people trapped in the cave were brought out alive. The boys were only told about Kunan when they had recovered a bit and were mentally strong to receive such news. “All cried and expressed their condolences by writing messages on a drawing of Lieutenant Commander Saman and observed one minute of silence for him,” said Jedsada Chokdamrongsuk, permanent secretary at the health ministry. Kunan’s act of bravery was applauded by people all around the world. Tributes were sent for him in high numbers.

Waleeporn expressed deep grief over the loss of her husband. She said: “I want to tell you, honey, you are the hero in my heart. You always were and you always will be.” Gunan’s father said that he was very proud, but also very sad at having lost his beloved son. The Thai Navy Seals also paid tribute to him, saying: “Saman left us while working as a diver and in a time where all divers [are] joining forces to complete the mission. His effort and determination will always remain in the hearts of all divers. May you rest in peace.” As a gesture of appreciation, the Thai Navy furthered a request to promote him posthumously.

To commemorate Kunan’s sacrifice as well as his service to the country, a bronze statue was erected, designed by artist Chalermchai Kositpipat, at Tham Luang Khun Nam Nang Non cave in Chiang Rai province. The around three meters tall statue has Kunan in diving gear, surrounded by thirteen boars, symbolizing the Wild Boars and their coach.