Is Thirteen Lives Based on a True Story? 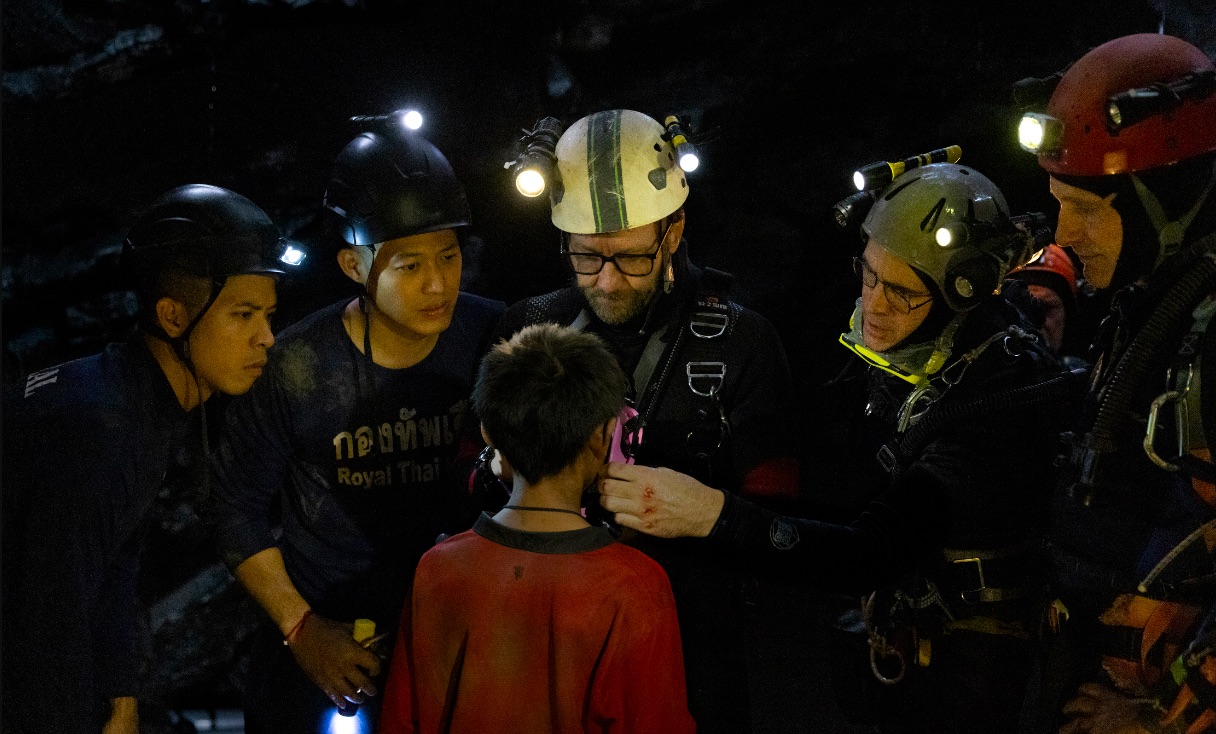 Amazon Prime’s ‘Thirteen Lives’ is the story of a young football team and their coach who get trapped in a system of caves that are flooded after heavy rainfall. It focuses on the rescue efforts that bring together people from all corners of the world to devise an impossible way to get the boys and their young coach back home, alive and breathing. Directed by Ron Howard, the survival drama film examines the incident from every angle, showing how collaborative rescue missions usually are.

While the limelight tends to fall on a single person or their team, many more forces are working in the background, which is what we see in ‘Thirteen Lives.’ It is so grounded in reality and tells such a goosebump of a tale that one can’t help but wonder if it is based on an actual incident. If you’re wondering the same thing, we’ve got you covered.

Is Thirteen Lives a True Story?

Yes, ‘Thirteen Lives’ is based on the true story of the Wild Boars and their assistant coach, who were trapped in the Tham Luang cave in Northern Thailand when it was flooded due to heavy rainfall. On June 23, 2018, the team and the coach decided to explore the caves after the practice, something they’d done multiple times before. They were aware that the caves flooded during the rainy season, though it was still a few days before the heavy rainfall would arrive. Unfortunately, the rain came early, leaving the team and their coach trapped within the cave to avoid drowning.

When none of the boys returned home in the evening, the parents grew restless and called the head coach, Nopparat Khanthavong. Songpol Kanthawong, a boy who’d left the practice with his mother, informed him about the caves, where he found their bikes and other things, as well as the water that was blocking the way. Khanthavong knew his team was trapped underwater and called the authorities for help. For the first few days, the Thai Navy Seals and locals tried to find ways to get the boys out.

But with no way to reach the trapped team, an alarm was sounded internationally, asking for help from anyone who knew anything about cave diving and could help rescue them. This led to cave divers from all over the world converging in Thailand; British divers Rick Stanton and John Volanthen led the task of cave diving and finding the boys and their young coach. The duo was aided by Belgian cave diver Ben Reymenants and French diver Maksym Polejaka. They didn’t find anything for the first few days, and their hopes dropped as the oxygen level decreased in the caves.

It was on Day 9 that the two men finally found all thirteen alive, more than a mile and a half from the cave’s entrance. While everyone was happy to know that the team was alive, there was no easy way of bringing them out safely. They were already weak from being trapped in the cave for more than a week. Moreover, they had no experience with cave diving, and there was no time for waiting because, in another couple of days, the rains would come with full force, and then it would become impossible to get them out.

Australian doctor and diver of 30 years, Richard Harris has been hailed a hero after risking his life to make the treacherous journey into flooded caves to assess the health of the trapped boys. It was on his advice that the boys were cleared to be rescued. #ThailandCaveRescue pic.twitter.com/r3wzJJIwrs

This is when Dr. Richard Harris was brought in with his expertise in anesthetics- the plan was to sedate the boys and then bring them out tied to flexible stretchers. Harris was not sure if the plan would work. “I expected the first two kids to drown, and then we’d have to do something different,” Harris told National Geographic in 2019. “I put their odds of survival at zero.” And yet, he knew there was no better way to go about it. The boys were given a combination of sedatives, including ketamine and Xanax, which rendered them unconscious and allowed the divers to maneuver them out of the caves safely.

Luckily, the plan worked, and all thirteen people came out alive, though some rescuers lost their lives in the process. While the whole operation had been extensively captured by the media and was an internationally known event, director Ron Howard discovered many more things about the rescue while making the film. He realized there were many more elements to the story, especially how thousands of rescuers and volunteers worked. With thousands of soldiers, hundreds of divers, and many more volunteers who kept the operation going, Howard found that this was not the story of a couple of people acting as saviors.

Co-producer Vorakorn Reutaivanichkul told The Guardian: “We really didn’t want another white-savior narrative. Not just because we’ve seen it too many times in films, but because it isn’t what happened. The film is uplifting about what humans do in a crisis, which is, I think, what we need in this modern world.” Howard, who has previously directed ‘Apollo 13’ which centers on similar themes of claustrophobia, impending disaster, and the coming together of a group of people to save the day, wanted to keep it as authentic as possible without turning it into a documentary.

Two years today, and the first 4 boys were safely out of the Tham Luang cave.#thaicaverescue pic.twitter.com/W6aYOC78cZ

“Documentaries are about being as comprehensive and informative as possible. Scripted versions of true events have to offer that as well, and yet, their promise also includes something else. It involves engaging the nervous system of the audience by relating to and connecting to those characters and their circumstances,” the director told Deadline. Rick Stanton and Jason Mallinson, the cave-divers who’d worked tirelessly during the rescue, were brought on board to help understand what it entailed on a real granular level.

Due to no footage of the underwater rescue, Stanton and Mallinson helped bring specific details into perspective, giving the filmmakers an idea of the challenges they faced inside the caves with no visibility while assisting the stunt doubles with the challenging scenes. In addition to the rescue, Howard wanted an authentic portrayal of the place’s culture. The story is set in Northern Thailand, and it was made sure that the actors got the dialect right. “I don’t speak Thai, and yet, it was vitally important that the culture be represented in a very authentic way. That required me deputizing some very talented people in the process,” he continued.

Howard also wanted to make sure that apart from the central characters, the story acknowledged the effort of everyone else, including everyone from the government officials “who never took their foot off the gas” to the local farmers who sacrificed a lot just to see the boys come home safely, and the coach who kept the boys calm and composed while trapped in the caves. Needless to say, the film succeeds in its endeavors while delivering a searing tale of courage, willpower, and teamwork that leaves an imprint in the hearts of the audience.

Read More: Where Are the Wild Boars Now? Update on the Rescued Thai Boys