Secrets in the Woods: Cast and Filming Locations Guide 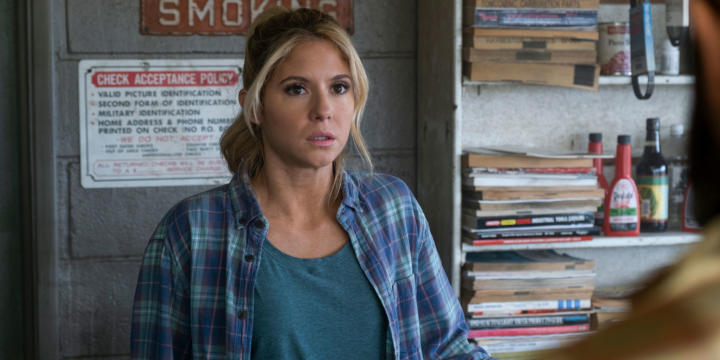 ‘Secrets in the Woods’ is a thriller film that revolves around a couple whose plans for a quiet and romantic weekend getaway goes kaput when a familiar stalker lurks in the background. Young couple Sandra and Brant head to the woods to spend some cozy time in a cabin. City girl Sandra is naturally fascinated by the haunting yet beautiful isolated cabin. As she soaks in the thrill of living far away from the hustle and bustle of the city, Sandra has a feeling that they are being watched by someone. When she shares the worry with Brant, he tells Sandra that she is overthinking as she is out of her comfort zone.

After a while, Sandra spots a strange man and runs away from the cabin only to get knocked out by the very man, who turns out to be Brant’s father, Langley. When she gains consciousness, Sandra finds herself tied to a room in the cabin with shackles. Turns out, Langley has been using Brant to woo women and bring them to the cabin, so that Langley can force them into submission to live as he dead wife. After failing to reach her sister for several days, Meanwhile, Sandra’s sister, Becky, traces the location and the two sisters map out a plan to safety. Will they be able to escape from the abductors? Let’s go through the filming locations of ‘Secrets in the Woods.’

Secrets in the Woods Filming Locations

It was initially titled ‘Off the Grid,’ a title that suits the central theme of the movie. The television movie is directed by ‘Sunday Brunch’ fame Sara Lohman, while Michael Shear serves as the writers. Just like several other Lifetime movies, ‘Secrets in the Woods’ was shot in the western U.S. state of California. Here are the exact filming sites!

The filming of the movie concluded in the first week of February 2020. The wrap-up party was held at The Village bar and restaurant at Ventura Blvd., Studio City, California. Here’s a picture of the entire cast and crew who worked on the film.

Actor Taylor Frey, who plays Brant, shared an on-set mirror selfie in his trailer advising people to wear masks. The caption read: Wear a mask so actors can go back to work and selfie in trailers and drink too much coffee on set.

Although we aren’t sure but going by the pictures shared by the production company, Ninth House Productions, it seems like several scenes were shot at San Martin. Located in Santa Clara County, California, San Martin is a census-designated place and is just a five-hour drive from the city of Los Angeles.

Here’s a series of pictures shared by the actor-producer Autumn Federici featuring the majority of the main cast members having a fun time in between takes of the cabin thriller.

The production house posted a picture of Mike Capozzi, who plays the gun-wielding gas station guy Carl in action. The gas-station you see behind is a part of the Four Aces movie set, that features a gas station, diner, and a replica of 1950s American motel, comprising three dressed motel rooms and a reception office.

Located in the Californian desert, Mojave, about an hour northeast of Los Angeles, the set served as a filming location for several movies, especially belonging to the horror or thriller genre. Check out the picture of the cast and crew posing alongside the famous Four Ace sign!

Secrets in the Woods Cast

Brittany Underwood headlines the cast as Sandra, the woman who is confined to the cabin by the father-son duo. She is best known for her performance in ‘One Life to Live,’ ‘Hollywood Heights,’ and ‘Game Change.’ Joining her as her shady boyfriend Brant is Taylor Frey. You may recognize Taylor as Don Hagarty in ‘It Chapter Two’ and Justin/Dustin in ‘Days of Our Lives.’ ‘Sasquatch Watch’ fame Jim Klock appears as Langley, while ‘Game Night’ star Kabby Borders plays the role of Sandra’s sister Becky. The cast also includes Mike Capozzi as Carl, Autumn Federici as Elizabeth, Mary Carrig as Bartender, and Mac Watson as Meghan.