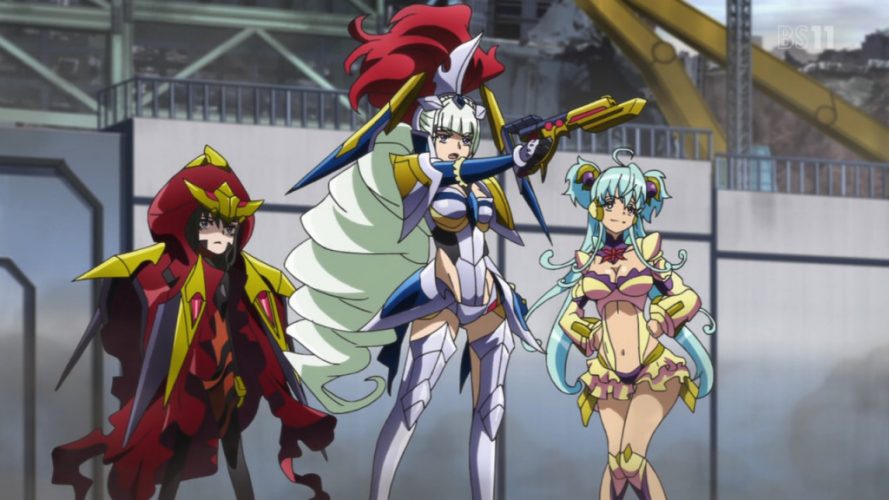 Senki Zesshou Symphogear (literally meaning Superb Song of the Valkyries: Symphogear, and known as Senki Zesshō Shinfogia in Japanese) is a fantasy anime television series produced by an anime studio called Satelight. A manga adaptation of the series was released on December 10, 2011, and a month later, on January 6, 2012, Season 1 of the show was released. Season 1 struck a chord with viewers and understandably, the show was renewed for a second season.

Senki Zesshou Symphogear Season 6 Release Date: When will it premiere?

Unfortunately for those who like watching anime shows in English, Senki Zesshou Symphogear does not have an English dub, despite having an international fanbase. The reason behind this is the fact that the show has a phenomenal original score and songs, which are written for every battle which takes place in it. Thus, an English dub would require the songs to be translated too, and no one has bothered to do so thus far, partly owing to the fact that translating the songs would ruin their essence. There exist some English dubs done by fans, but these are so terrible that you would be better off avoiding them. You can watch the original Japanese version of the show with English subtitles on Crunchyroll.

Senki Zesshou Symphogear is set in a fantastical world and has a rather wacky plot. Two years prior to the events in the show, an idol duo known as Zwei Wing – consisting of Tsubasa Kazanari and Kanade Amou – fought against a mysterious alien race known as the Noise using their songs to activate powerful weapons and armour known as Symphogear. While they were able to temporarily fight off an invasion, Kanade sacrificed herself to save a girl called Hibiki Tachibana, and in the process, a fragment of her Symphogear got embedded in Hibiki. The attack also left the existence of the Noise known to the public, but the existence of Symphogear was kept a secret.

Two years later, Hibiki gets dragged into another attack by the Noise, and while trying to save a young girl during the attack, she awakens Kanade’s Symphogear, which was embedded in her. Subsequently, she teams up with Tsubasa, and the two have to learn to master their powers and work together to keep the world safe from the threat of the deadly Noise.

As the show progresses, Hibiki and Tsubasa become a fearsome team and continue their fight against the Noise along with another powerful Symphogear-wielder called Chris Yukine. However, complications arise when an international superstar called Maria Cadenzavna Eve declares a war on the world, leaving Hibiki and Tsubasa to defend the world against their threat too.

After defeating Maria and her allies, Hibiki, Tsubasa, and Chris try to return to their daily lives. However, peace in the world is threatened again when a powerful alchemist called Carol Malus Dienheim shows up, and along with her followers, the “Auto Scorers”, she threatens to plunge the world back in to war. It thus again falls on Hibiki, Tsubasa, and Chris to defeat Carol and save the world from destruction.

In the fourth season, Hibiki, Tsubasa, and Chris continue their work of keeping the world safe, but Hibiki finds herself struggling to cope with her military career and schoolwork. During one mission briefing, Hibiki is made aware of a mysterious organization called the Bavarian Illuminati, who have been responsible for many recent global disasters. Hibiki and her team then infiltrate a Bavarian Illuminati facility and free hundreds of slaves. Exposed, the organization’s top brass then declares a war on the world, and threaten to kill millions. Thus, Hibiki and her team are once again forced to do what they do best – save the world.

Over the four seasons which have aired thus far, Senki Zesshou Symphogear has seen dozens of characters take to the screen. However, only three characters have consistently been the main ones throughout all the seasons, and below, we’ve provided you with brief backgrounds on each of them.

Tsubasa Kazanari: One of the original members of Zwei Wing, Tsubasa wields a Symphogear known as the Heavenly Wing Slash, the holy sword of Susanoo. When her partner, Kanade, sacrificed herself, Tsubasa was left heartbroken and became a very jaded person. As a result, initially, everyone finds it very difficult to get along with her. However, as the show progresses, Tsubasa gets over her heartbreak, becomes more social, and even shows a jovial side. She is shown to be especially protective towards Hibiki.

Hibiki Tachibana: As a child, Hibiki was an avid fan of Zwei Wing and survives the first Noise attack when Kanade sacrifices herself to save her. In the process, fragments of Kanade’s Symphogear get embedded in Hibiki’s body, and they later awaken to give Hibiki tremendous power. Hibiki wields two Symphogears – the holy lance of Odin called the Swaying One, and the holy sword of Roland called the Sword of Endurance.

Chris Yukine: The third main character in the show, Chris is a mysterious girl whose parents were killed during the Noise attack. Although Chris fights against Hibiki and Tsubasa initially, she later realizes that they are on the same side, and as a result starts cooperating with the duo to keep the world safe from threats, both internal and external.