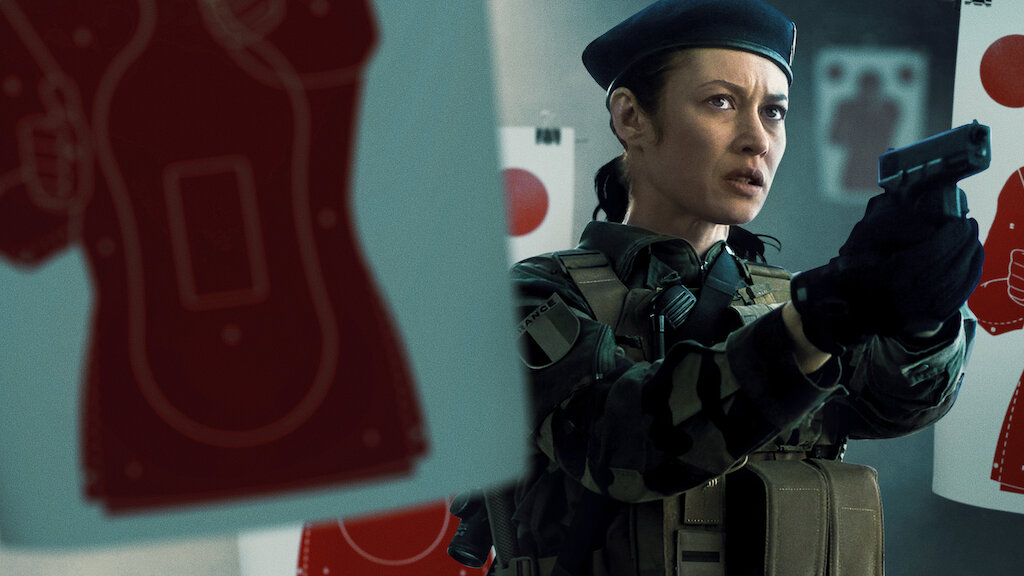 Netflix’s ‘Sentinelle’ is a French-language action revenge-thriller film directed by Julien Leclercq. The film stars Olga Kurylenko (‘Oblivion‘), Marilyn Lima, Michel Nabokoff, Martin Swabey, Carole Weyers, and Andrey Gorlenko in the lead roles. The plot revolves around a female soldier on the hunt for the people who harmed her sister. The thrill-inducing ride ends on a high note that completes the character’s journey satisfyingly. Here’s everything you need to know about the ending of ‘Sentinelle.’ SPOILERS AHEAD.

The film begins in a Middle Eastern country, where a group of French soldiers is trying to interrogate an Arab woman. Klara, a member of the troop, tries to convince the woman to give up her husband’s location. The woman breaks, and the troop swiftly moves out to capture the husband. Klara realizes something is wrong, but before she can do anything, the soldiers are ambushed, and a gunfight breaks out. Amidst the crossfire, the bomb expert is trying to diffuse the bomb attached to the Arabic couple’s son. 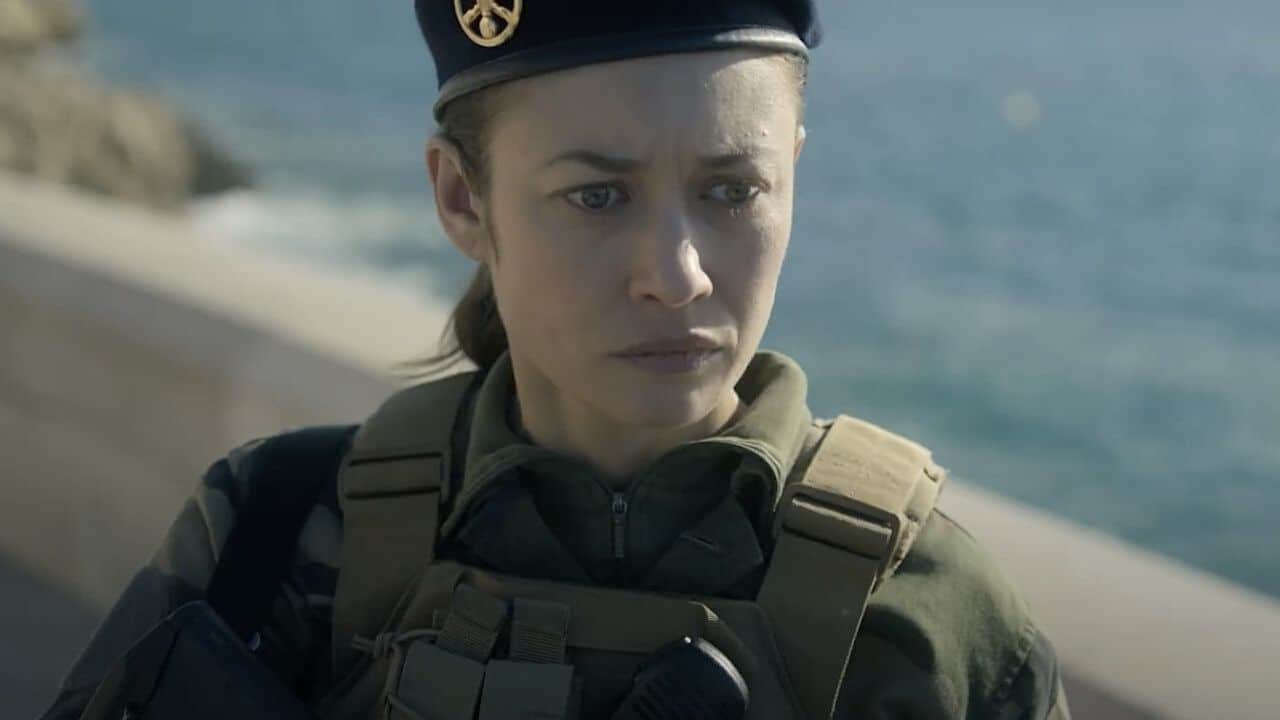 Klara realizes that the kid is about to press the trigger and reaches out for her gun to shoot him before he can set the bomb off, but it’s too late; the bomb kills the team member trying to diffuse the bomb. Klara is left traumatized by this incident and sent home to serve under ‘Operation Sentinelle,’ a military security program to keep vigilance over terrorist activities.

Klara experiences night tremors and PTSD as a consequence of her traumatic experience. She hides this from her family and resorts to taking pills to suppress her PTSD. One night, Klara goes to a club with her sister, Tania. At the club, Tania splits from her sister to meet a Russian guy, while Klara hooks-up with a woman she meets. Tania leaves with the Russian and his friends, promising to call Klara later.

Klara spends the night with the woman from the club. The next morning, Klara tries to call Tania, but she doesn’t answer her phone. Klara reports for duty and has another PTSD episode, after which she receives a call. She rushes to the hospital to find her sister in a coma and learns from the investigating officer that her sister was physically assaulted. How Klara sets her trauma aside to bring the people responsible for harming her sister to justice forms the rest of the plot.

Sentinelle Ending: Does Klara Get Her Revenge?

Klara suspects that the Russian, Yvan Kadnikov, is behind the assault on her sister. The investigating officer explains that he is the son of Leonid Kadnikov, a tech genius living in France under diplomatic protection, and legally bringing him to justice is complicated. Klara decides to take the law in her hands and sneaks into Kadnikov’s villa. She confronts Leonid, who reveals he is the one who raped Tania. Klara is held captive but manages to escape. Back at the hospital, Tania regains consciousness but refuses to press charges against Kadnikov. Klara learns from the news that Kadnikov is planning on returning to Russia.

Klara steals weapons and ammo from the military armory and sets off to kill Kadnikov to get her revenge. She enters the villa and single-handedly takes out almost all of Kadnikov’s men. She finds Leonid and holds him at gunpoint, but before she can shoot him, he insults her, and Klara kicks him down the stairs, seemingly killing him. As she is about to leave, Yvan stabs her in the back with a knife, and she is forced to shoot him. A Special Forces team arrives to take control of the situation, and Klara is forced to flee. However, just before she leaves, she witnesses Leonid regaining consciousness.

Three months later, Leonid is living in a resort in Dubai. We see him requesting a fruit basket from the hotel staff. A waitress walks down to his room with the fruit basket, and just as Leonid turns around to see the waitress’s face, he is brutally stabbed to death by the woman. The woman is none other than Klara, who has tracked down Leonid and finally has her revenge.

The ending of the film is as straightforward as a soldier. It is the route taken to arrive at the conclusion that is the complicated part of the story. We learn early on in the film that Klara and Tania share a close relationship. Therefore, it is not surprising when Klara swears revenge against Leonid. Over the course of the movie, after facing a few challenges, Klara does come close to achieving her goal of killing Leonid, but he slips away.

So it’s an exciting twist that throws off the viewers, and by delaying Leonid’s almost inevitable fate, the director crafts a much more satisfying ending. In the end, the conflict is resolved as Klara has her revenge but is forced to live in hiding to avoid facing charges for murdering Leonid. In the last scene, we see Klara keeping a watchful eye over Tania from a distance and jogging past her former platoon, who are surveying the beach.

What Is Klara’s Purpose?

After her traumatic experience, Klara is sent home to serve in the “Operation Sentinelle” program. We know that she is a competent officer and a conversation with Tania clarifies that she is not happy with her new posting. She feels like she has lost her sense of purpose. She struggles to find a purpose while working in a program that only involves surveillance, and interference is discouraged. It is more of an observe and report job. Klara struggles with PTSD, which is amplified by her lack of self-purpose.

Eventually, she finds a purpose in obtaining justice for the crimes committed against her sister. This purpose drives her throughout most of the film and is fulfilled towards the end. The last scene hints at a new purpose for Klara. Earlier in the film, when Tania refuses to press charges against Leonid, Klara explains that Leonid must be punished for his actions.

Allowing him to go free will lead to more women falling prey to his monstrosity. Although Leonid is killed in the end, it is likely that Klara understands there are more such monsters out there committing heinous crimes and getting away with them. In the last scene, we see her hiding in plain sight, keeping a watch on her sister. The last shot shows her jogging in the opposite direction of her former platoon, which continues carrying out the program’s protocols.

The shot subtly depicts Klara’s new status quo as a “Sentinelle” (a soldier on guard/duty) in contrast to those working under the program. Unlike her former teammates, she is willing to interfere and take action against the crime instead of just watching and observing (this is evident earlier in the film when a woman asks for the platoon’s help). It is a decisive moment that acts as an epilogue to Klara’s journey in rediscovering her sense of purpose.

Read More: Where Was Sentinelle Filmed?