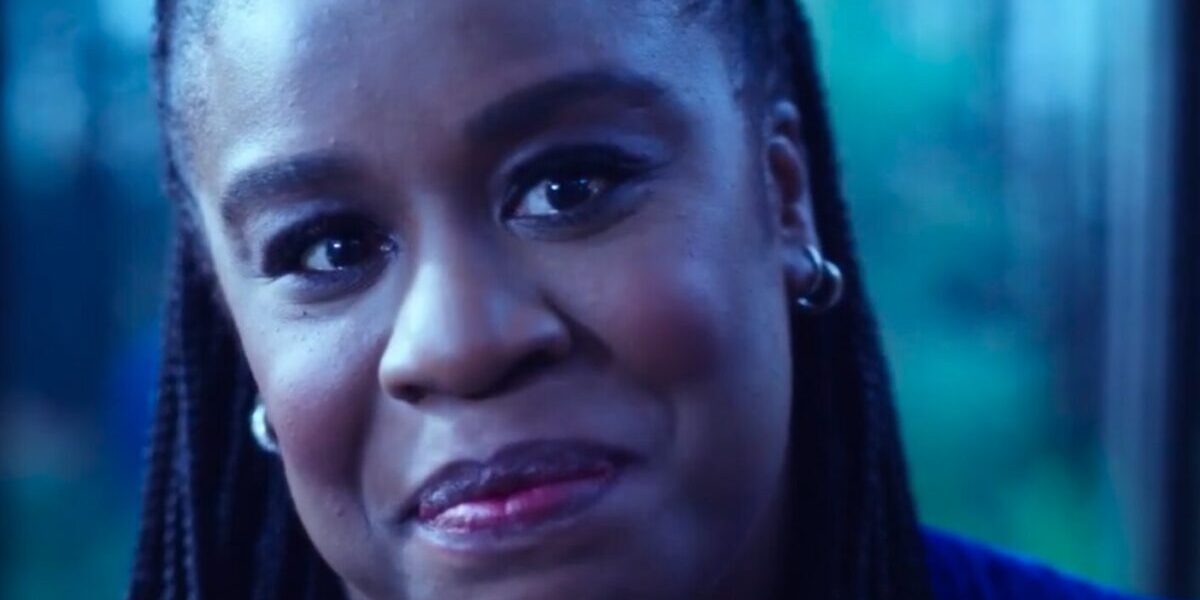 Helmed by David Weil, ‘Solos’ is a science fiction anthology series that comments upon our shared humanity while focusing on single characters from various walks of life, as their peculiar tales give way to a breadth of vision. The fourth episode from the series, which is titled ‘Sasha’ after the central character, lands way too close to reality. The story presents an accessible dystopian vision of the future, and what’s more horrifying is that the dystopia stems from a paranoia ingrained within the central character and not from a reality that exists outside.

Backed by an idiosyncratic performance by Uzo Aduba, the story unearths Sasha’s rooted agoraphobia as she is forced to face a destined truth. Backed by a lush set design and a distinct directorial sensibility, the story is nothing less than an insightful exploration of our peculiar times. However, if you are having difficulty comprehending the ending of the episode, let us release you from your doubts. SPOILERS AHEAD.

The episode focuses on the titular character Sasha as she communicates with her bot, Zen. It is revealed that she has lived in her safe home for 20 years. She is suspicious of the Bot as he urges her to leave the home. While sipping on wine, she chokes and begins to cough, while her bot reassures that it is not the virus. Sasha also does not receive change too well and is disapproving of her bot getting an update. She finds comfort in predictability.

But as the bot divulges, the update is a mandatory one. The audiences begin to get an idea of the situation. There was a pandemic 20 years ago, and a company called Stay Home banked on the opportunity to provide isolation home solutions to the denizens, and Sasha is one among many people who opted for the service of the company. But the present day, Zen professes, is different.

After twenty years of home isolation, Zen wants Sasha to leave her home and go outside. Zen tries to talk Sasha into venturing into the outer world, pointing out the possibility of traveling, but Sasha is adamant about not leaving her house. After coaxing fails, Zen tries to persuade Sasha by giving her the promise of financial gain, and when that fails, Zen reminds Sasha of her childhood bestie Nia. Zen asks whether Sasha misses Nia, and Sasha shows him the videos that Nia sent her recently.

However, according to Zen, the videos were sent twenty years ago, which makes Sasha revisit the past. As she recounts, one morning, she woke up, did her hygiene, and shortly after, the lockdown was declared, forcing everyone to stay home. She found Nia on the screen, screaming at the top of her voice, which drowned her own scream. She is made to recollect the uncertainties of the time – how the virus claimed the lives of families.

Traumatized by the onset of the pandemic, Sasha emptied her bank account and chose a hermit life, with washable furniture and glass ceilings. Speaking of family, she is reminded of James, her brother, who kept himself locked in the house for seven years. James did not walk out of his safe house until the administration forced him to leave, which Sasha thinks to be some kind of a conspiracy.

The stay counselor apparently created a simulation of the house burning, forcing James to leave. Sasha is thus exceedingly distrustful of the bot and the company that has enabled it. However, she thinks that as per the pact, she and Nia are still in their respective safe houses, waiting for the pandemic to subside. In the final moments, however, the bot reveals that Nia came out of her confinement a long time ago, and Sasha is the only one who is locked inside her house.

Zen reads a document to Sasha fed to him by the corporation. The document states the closure of the Stay Companion department since all the other customers have opted out of the service except Sasha. However, Zen states that he has managed to convince the officials to extend her stay for as long as she wants. The light goes out, and the screen fills with a bright white light, and then everything comes back to normalcy. At the backdrop of Sasha’s home, where there was a jungle, there now stands a simulated pool.

Sasha always wanted a pool by her house, but the simulated pool figures in a way that makes the house look as if it is submerged in water, which gives a sense of claustrophobia. Sasha makes one last request, to be visited by Nia, but Zen says his last goodbye, leaving Sasha in her self-imposed confinement in the “dream home.” The audiences get the impression that tormented by fear and anxiety, Sasha cannot muster up the courage to leave the home. But in the absence of a guiding voice and confined in the claustrophobic simulation, it seems improbable that Sasha would stay in the house for too long.

Why is Sasha Living in Denial?

Sasha thinks that Nia calls her and sends her videos from the outer world, but the videos were sent 20 years ago, and the last call that Sasha received from Nia was ten years ago, as divulged by the bot. Sasha thinks that the virus is still out there, and the company is doing her a disservice by forcing her to leave. The whole world, along with Sasha’s family, has moved on, while Sasha still has not been able to let go of her fear and embrace the outer world.

It seems that Sasha’s fears stem from a psychological condition ingrained within her. In our opinion, Sasha suffers from an anxiety disorder called agoraphobia, which is the fear of the outside world. This anxiety is probably what keeps her from venturing out of the house, and this is also the reason she fabricates stories inside her head to cope with reality.