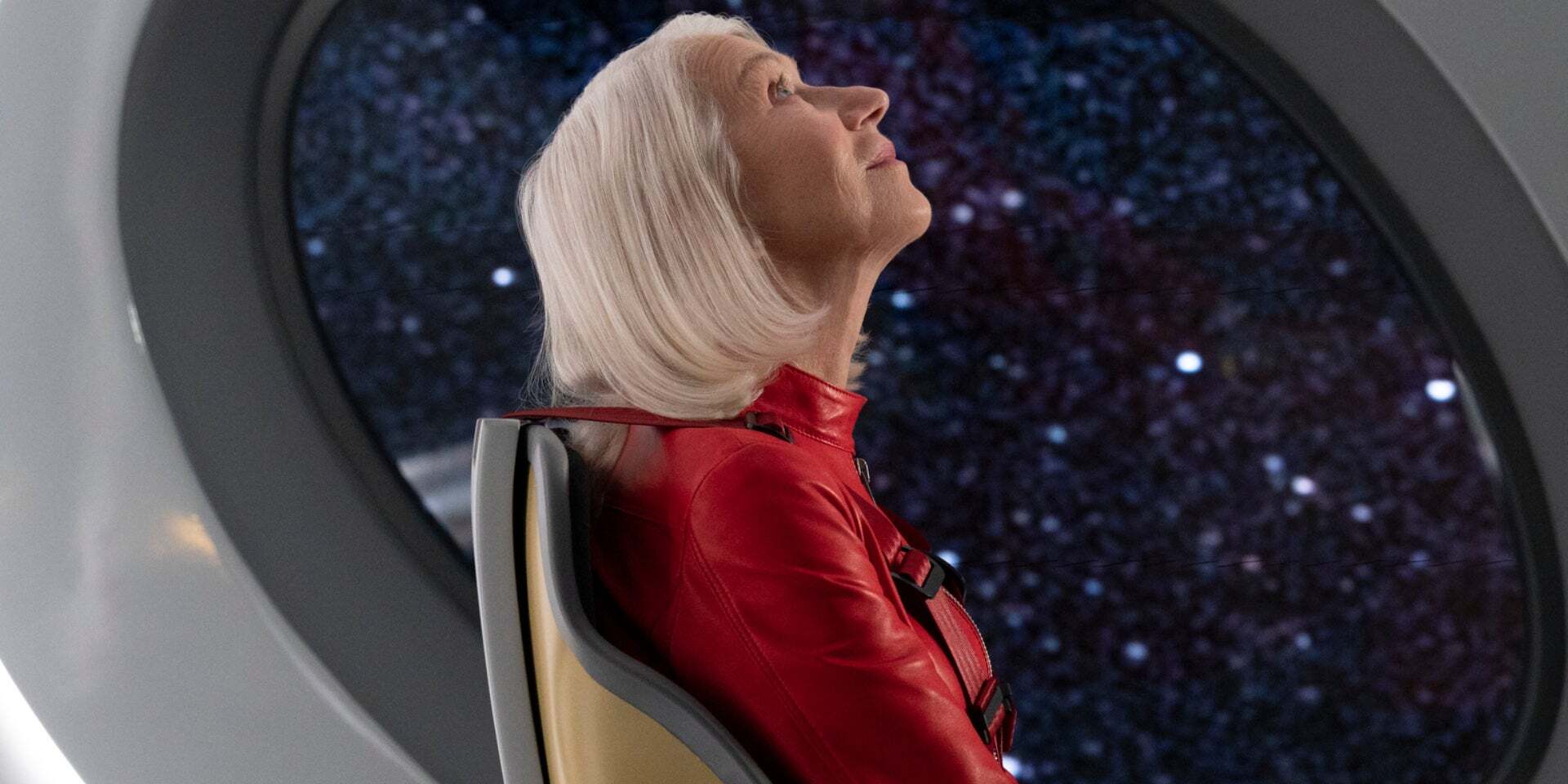 “Old age is a strange blunt foe,” so says the character around whom the story of the third episode of David Weil’s ‘Solos’ is woven. The standalone stories from the sci-fi anthology series often deal with themes of alienation, memory, and escapade, and the third episode, titled ‘Peg,’ is no different. Directed by Sam Taylor-Johnson of ‘Fifty Shades of Grey’ fame and driven by an invigorating performance by the charismatic Helen Mirren, the story of the episode focuses on the titular character as she makes her journey into oblivion.

Although it is more of a monologue than a story, Mirren delivers her lines to perfection, and her articulate and expressive acting brings out the best of the material. The story is delicately constructed through Peg’s recollections of her past, which says something about her present choice of venturing out into space. The sudden turn of the finality, coupled with the ethereal voice of David Bowie, gives way to ecstasy. And yet, if pondering upon the final moments raise questions in your mind, we shall try and draw a closure. SPOILERS AHEAD.

71 years old Peg Wykowski is on a journey to outer space. When the voice of the artificial intelligence TYM asks her about the reasons behind her choice to sign up for the Odyssey Shuttle Solitude Sweepstake study, she gives the reason that she was watching “The Hologram Singer” on the television when the advertisement popped up. She recites the whole advertisement verbatim and then goes on to resonate that her knack for adventure is the reason behind her signing up for the program.

The program only takes senior citizens into account since they will not be returning to earth. There is only one way to the journey, which is up, above, and beyond, into the abysmal darkness of outer space. The recollection of her childhood opens a floodgate of emotions for Peg, and she is reminded of her father. Her father died from cancer when she was five years old and was replaced by a “Remember Me Bot.” The death of the father, who had infinite love for Peg, has left a blank space in her heart. But then, after six months, her mother followed the destiny of her father, leaving Peg an orphan.

Peg remembers smelling her mother’s sweater to relive her memories, while she also notes that the smell became more of her and less of her mother as time went by. She recollects moving across the “pond” to England, to her grandmother, and adjusting to an unknown place in that dire time, which was exceedingly difficult for Peg. In the meantime, she is reminded of her childhood crush Chong Ming, a love that did not materialize into fulfillment. Chong asked her out for the prom night, and thinking she is a burden who is pitied by Ming, Peg declined him, although she is secretly regretful about her decision.

Her self-deprecation made her ignore calls from Ming, while she became saddened by the day, wearing her invisibility like a cloak. As she recalls, one day, after a long time, she met Ming in the market, who was by then married and had children. It was at this moment when Peg realized that she has grown old, looking at her wrinkled hands. She also remembers being on the bus one day and not being seen by the driver, who parked the bus in the depot and was leaving the vehicle before he saw Peg, a ghost of the past lurking in the dark corners of time.

Peg has always been scared of being seen and has found comfort in her invisibility. Somewhere down the corridors of time, she has lost the meaning of her life. Just as she was ready to give up on life, she came across the advertisement and ventured out into space. The final moments see Peg finding the meaning of her life, with a bit of reassurance from the robotic voice of TYM, and she requests him to move the course of the shuttle back to Earth.

Solos Episode 3 Ending: Is Peg the Daughter of Tom?

If you have seen the previous episode, you will know that Tom has a daughter named Peg. The second episode solely focuses on Tom, who is seen briefing an identical being about his family. When Peg talks about experiencing her father’s death at the age of five, the audiences suspect that Peg may be the daughter of Tom. When she talks about “dad 2,” it only brings us closer to the suspicion.

And when Peg shows the secret handshake that she and her father used to do, we become certain that she is indeed the daughter of Tom. The story takes place in the future, much after the previous episode, when the journey to space has become affordable. So, while the stories in the series are seemingly independent of each other, the second and the third episodes are tied through a familial thread.

Does Peg Return To Earth?

The final turn of Peg’s mind makes her realize the value of her life, and the realization instills her mind with a newfound urge to live. In the finality of events, Peg becomes assertive and asks TYM to revert the course of the journey to Earth, and her tone strikes to be visibly different than the apologetic, meek Peg that we meet at the beginning of the story. When TYM says that he cannot turn back the shuttle, Peg requests him if he can make an exception for her. Since TYM as artificial intelligence is not half as bad as HAL, we remain hopeful that Peg makes her journey back to Earth and meets Ming.