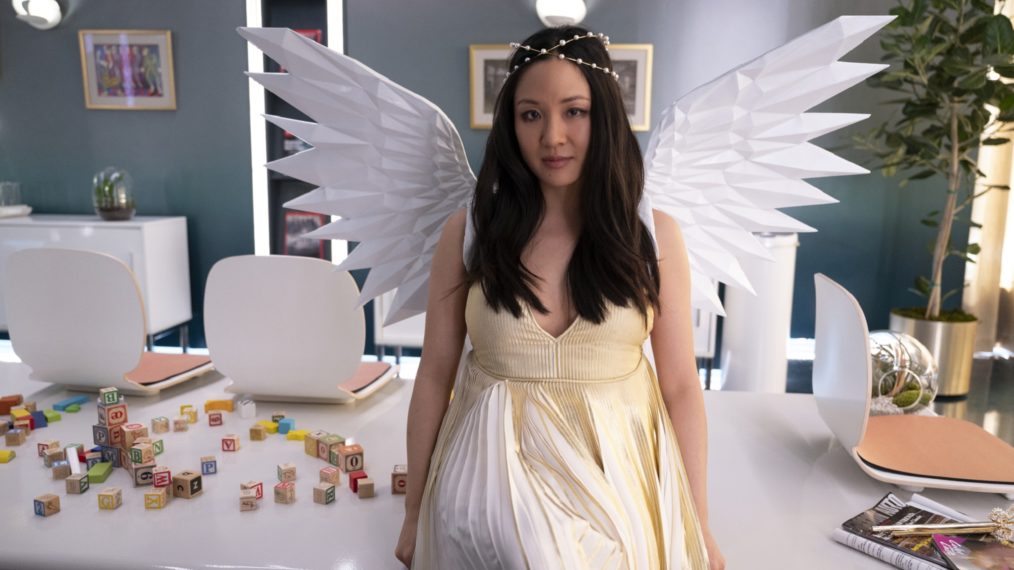 David Weil’s fantasy drama series ‘Solos’ uses a sci-fi lens to explore the human experience. Featuring 7 separate stories with a single, different protagonist, each episode of the anthology series is based in a different period and location. Episode 5 finds Jenny (Constance Wu) in a waiting room, recounting her life as a would-be mom when she realizes that she’s been in the room for a suspiciously long time. As she intermittently reveals entertaining and dark details about her life, the expressive Jenny draws closer to the inevitable realization about why she is in the waiting room. If ‘Solos’ episode 5 left you wondering about a few things, fear not! We come with answers. SPOILERS AHEAD.

‘Solos’ episode 5 opens with Jenny in an angel costume, wings and all, waiting in a sterile waiting room all by herself. Bubbly and slightly awkward, she launches into a monologue about herself, her husband, and how they are trying to have a child. Her costume is explained by the children’s party she attended the previous day, from which, she notes, she has not returned home. Soon enough, the monologue turns to her hunky neighbor Carl, who Jenny has the absolute hots for, and his 8-year-old son Tyler, whom she used to babysit.

Jenny says that her motivation for babysitting Tyler was to get close to his father and make him fall in love with her. In descriptions that are alternatingly funny and alarming, she describes her times alone in the house with the 8-year-old. She confesses to finding Tyler’s constant Spider-Man references annoying before talking about how they shared each other’s fears and sadness. Things begin to seem inappropriate when Jenny describes answering some of Tyler’s questions about adult relationships truthfully.

Continuing with her story as she bides her time in the waiting room, Jenny describes the night she got drunk and passed out naked on Carl’s bed whilst babysitting Tyler. After calmly describing how Carl threw her out of the house and threatened to call the police if she spoke to Tyler again, Jenny suddenly wonders aloud where she is and why she’s been waiting for so long in the waiting room anyway.

The lone protagonist then, in an attempt to retrace her steps leading up to the waiting room, begins to describe the party she attended. Bored of the repetitive conversations by parents about their children, the (slightly jealous) Jenny went into the bathroom. There, she was devastated by the sight of blood on the tissue paper. Although mentioned earlier, it is here that the audience realizes just how keen Jenny was to have a baby.

Realizing her husband and her attempts at having a child have failed yet again, she went on an alcoholic rampage that eventually got her ejected from the party. An increasingly inconsolable Jenny continues to describe how she attempted to drive back home in her inebriated state. Her last words before she completely breaks down describe seeing a Spider-Man figurine before crashing. In the closing scenes of episode 5, we see the actual Jenny in a coma in a futuristic medical facility.

With the injuries from her accident still apparent on her face, it is soon revealed that she is donating her memory. While one of the doctors wonders who would want her memories, the other leaves to go for lunch. So it looks like our melancholy protagonist is still in a coma from her accident and will most likely remain in that state for some time. It is interesting to note that the doctor who leaves to go to lunch says something to the effect of letting Jenny stew in her memory for a bit longer. The same doctor also earlier refers to her as a “child-killer,” thus confirming that Jenny did kill her neighbor’s young son Tyler.

Before that, despite her vivacious descriptions, Jenny described what might have been an alcoholic’s relapse at the party. From passing out naked on her neighbor’s bed to having emotional conversations with his 8-year-old son, Jenny has described multiple occasions where her actions were inappropriate due to her lack of sobriety. Combined with her low self-esteem and jealousy of other parents, her alcoholism made Jenny make some very poor choices that resulted in the death of a child. By letting her stew in her memories, the doctor is essentially punishing her before she is lost in the oblivion of a memoryless coma.

Why is There No Blood on Jenny’s dress?

Jenny describes having her period at the party, which eventually shows up on her dress whilst she is making a drunken scene. She then attempts to drive home but gets into a violent accident that results in the death of a child. However, when we see her in the waiting room, she is wearing a pristine angel costume. The fact that Jenny’s entire monologue occurs inside her head is revealed only at the end of the episode.

Hence, even as Jenny’s body, injured from the accident, lies in a coma, a figment of her personality remains awake. It is this figment of Jenny’s personality that is also displayed on the screen at the futuristic medical facility where she is being treated. Hence, the dress that we see Jenny wearing for most of the episode is in her imagination, and therefore, is pristine. Considering Jenny is in a coma and is donating her memory, she is as close to death as possible without actually dying. Her angel costume, therefore, is more of a clue as to her fate rather than representing what she was wearing at the party.