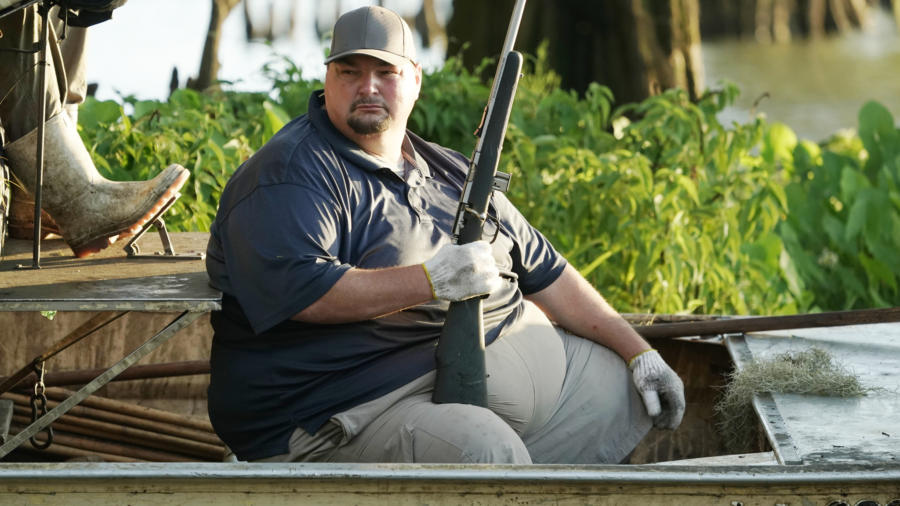 Creedence Clearwater Revival might have popularized ‘Born on the Bayou’ and swamp rock in their 1969 song, but ‘Swamp People‘ give it a completely different meaning. The History Channel series shows the everyday lives of alligator hunters, who trawl the swamps, hunting alligators for a living.

Naturally, the show gives you a glimpse of the wilder side of the USA, where nature prevails, and urbanization has not quite caught up yet. The alligator hunters in ‘Swamp People’ mostly go to various swamps in Louisiana over the seasons. You might be curious about where the show has been filmed since the swamps are beautiful and deadly at the same time. We have got you covered in that regard.

Where Was Swamp People Filmed?

‘Swamp People’ is filmed across numerous swamps in South Louisiana. One of the most prominent areas to be featured on the show is the Atchafalaya River Basin, which has the distinction of being the largest wetland or swamp in the USA. Known as ‘America’s Wetland’, the basin is home to about 65 species of amphibians and reptiles. Parts of the show have been filmed in Bayou Sorrel, Bayou Pigeon, Pierre Part, Morgan City, Houma, Pecan Island, and Conway Bayou, among other places.

Since the show makers realized that the audience might feel the formula of ‘Swamp People’ to be a little repetitive, eventually, they expanded beyond Louisiana to include places like Texas, as well. Now, without much ado, let us walk you through the details of the places where ‘Swamp People’ has been filmed.

Pierre Part is located in South Central Louisiana in the Assumption Parish. Located to the east of the Atchafalaya Floodway system levee, north of Lake Verret, it is a relatively shallow lake that is surrounded by cypress trees. The Atchafalaya River goes down, from near Simmesport, passing Pierre Part to Morgan City, and ultimately the Gulf of Mexico.

Pierre Part is where Troy Landry’s home is. Troy, along with Jacob, Chase and Brandon Landry has filmed parts of the show here.

Morgan City, which is located near the Gulf of Mexico, towards the southern end of the great Atchafalaya Swamp, is another popular filming location in ‘Swamp People’. This is hardly surprising since Morgan City is known for saltwater fishing, hunting, and its fine Cajun cuisine.

That being said, the filming does not take place at Morgan City itself, but rather moves towards the north, at Lake Verret.

Known as the “The Heart of America’s Wetland”, Houma lies between New Orleans and Morgan City. Part of the Terrebonne Parish, Houma is also known as the ‘Venice of America’. The numerous bayous and bays in the nearby areas, make this a wonderful hunting ground, which is why ‘Swamp People’ has filmed quite a number of episodes here.

It also offers a combination of brackish and freshwater, deep-sea, and coastal fishing. R.J. and Jay Paul Molinere of ‘Swamp People’ take viewers through the waterways near Houma in episodes of ‘Swamp People’.

Pecan Island is located in the extreme southern part of Louisiana. It lies to the southeast of Lake Charles, southwest of Lafayette, and south of White Lake. The island is a cheniere, which basically means a continuous ridge built on swampy deposits, supporting trees.

Due to its inaccessibility in earlier days, the waters around the island are home to various lifeforms. ‘Swamp People’ has catapulted this island to relative fame, with Liz and Jessica Cavalier taking viewers through it, in some episodes. Notably, Elizabeth or ‘Lucky Liz’ is now a resident of Pecan Island, having grown up in the marshes south of Houma, and has been around gators most of her life.

While ‘Swamp People’ has filmed extensively in Louisiana, it has also expanded to include places like Texas. This makes sense since Texas has an intensely high population of alligators, and comes in third after Florida and Louisiana. With a population between half million to a million gators, Texas is a fertile hunting ground.

Some alligators are monstrous too, with males growing up to 14 feet and females up to 10 feet. Amos Cooper, the alligator program leader with the Texas Parks & Wildlife Department spoke about how the people involved in the show teamed up with some of the hunters from Texas.

‘Swamp People’ has taken us extensively through several locations in Louisiana, showing us bayous, marshes, swamps, and backwaters. It has also expanded to include areas like Texas. With exotic locations and deadly prey, the series remains a gripping and informative watch.