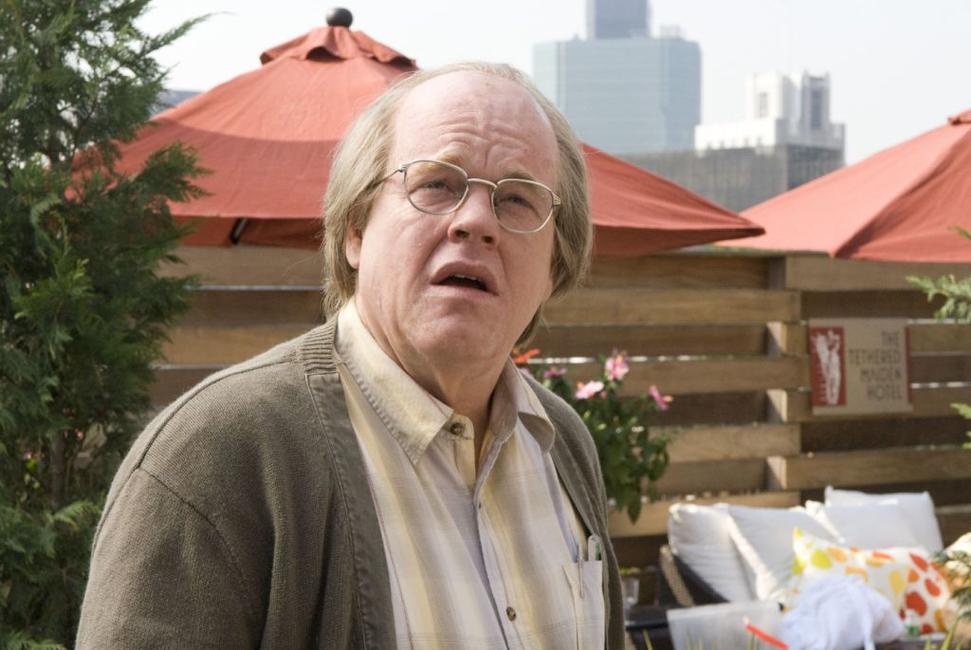 ‘Synecdoche, New York’, like every other Charlie Kaufman movie, is a portrait of a character’s fragmented psychological state where they start to delve into the realms of philosophy, asking questions about life, death, and the reason for existence. This quest leads them on a journey that can be best described as bizarre and unconventional and extraordinary too. Laid with motifs and symbolism and outright outlandish quirks, at times, this movie leaves you with an understanding that is hard to put into words. Still, we have tried to break down its meaning here. If you haven’t seen the film yet, come back to this article later. SPOILERS AHEAD

Caden Cotard is a theatre director who finds his life falling apart when his wife, Adele, decides to leave for Europe with their daughter, Olive, never to return. As his health deteriorates, he starts working on his magnum opus of a play where he constructs a model of New York in an abandoned warehouse. As time flies by, he starts to lose control over things and the lines between reality and imagination are blurred.

What is happening in ‘Synecdoche, New York’? 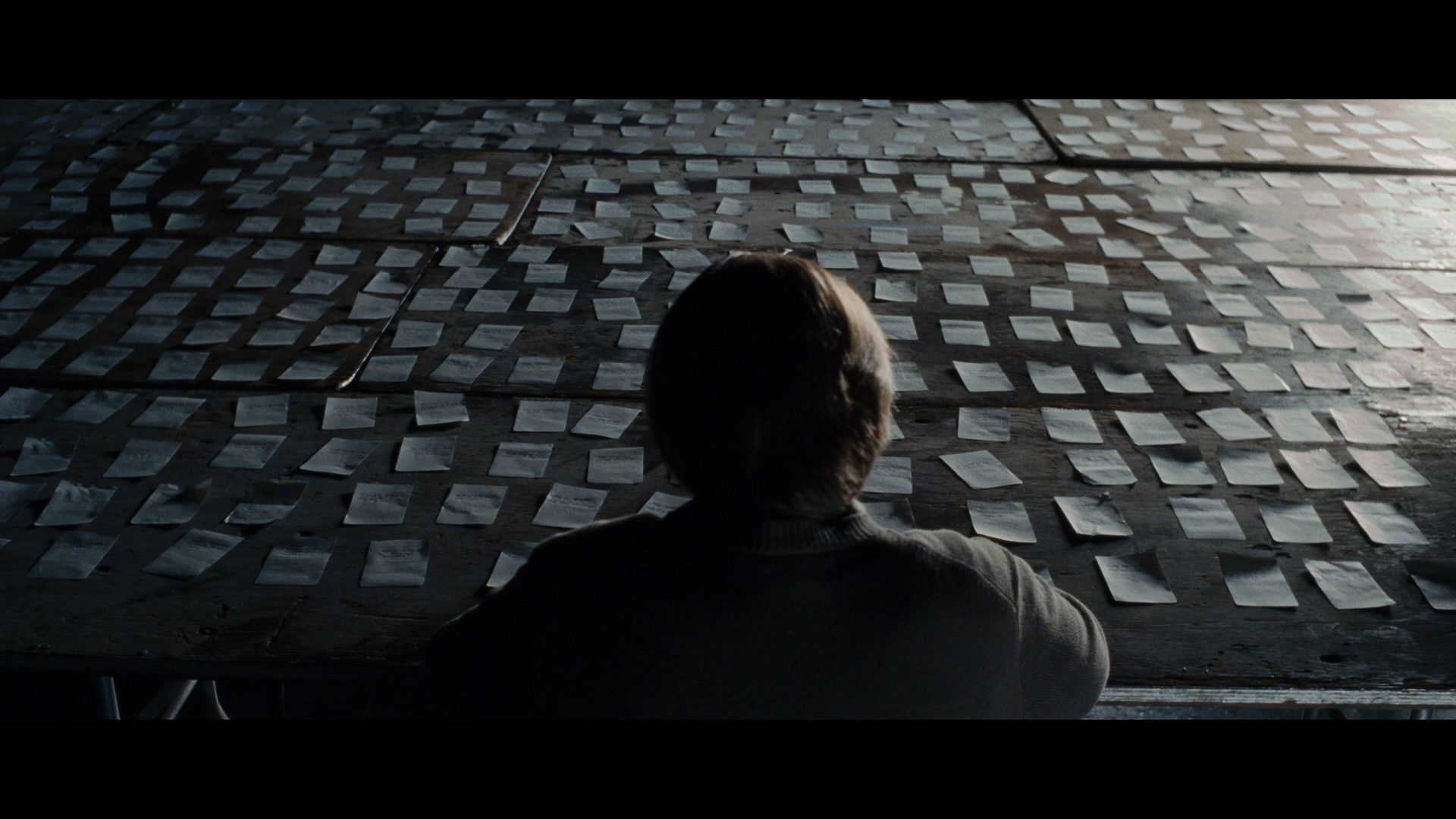 ‘Synecdoche, New York’, in all of its varied meanings, follows the story of a man who wants to figure himself out. When we first meet him, Caden is doing a play that is not originally his. He is married to an artist whom he finds much better at her work than he is at his. The differences between them, which didn’t change even after the birth of their daughter, lead them to become more and more distant until eventually his wife leaves him and starts her successful life in Europe.

Caden suffers from the meaninglessness of his life. He wonders what it has amounted to if he didn’t do anything worthwhile. When his play receives praise from everyone but his wife tells him that he should not consider it a success because it wasn’t his in the first place, Caden is pushed towards the journey to look inside himself and come up with something that he can give to the world and claim as his. This is also how he wants to impress Adele, and hopes that once she sees how he has changed, she would come back to him. Receiving the McArthur Grant gives him that opportunity and he decides to stage his biggest project.

However, the thing he thought would bring him back to his family is also the one that holds him so tight in its clutch that he is never able to get out of it. It becomes such an inseparable part of his life that eventually, neither he nor the audience is able to decipher where his real-life begins and where it merges with his imagination. We can no more tell if he ever gets out into the real New York or if he continues to hide away in the version of it that he has created inside a warehouse. This also appears in contrast to the way his and Adele’s art works. While the scale of his work keeps getting grander by the day, Adele’s paintings start to get smaller. 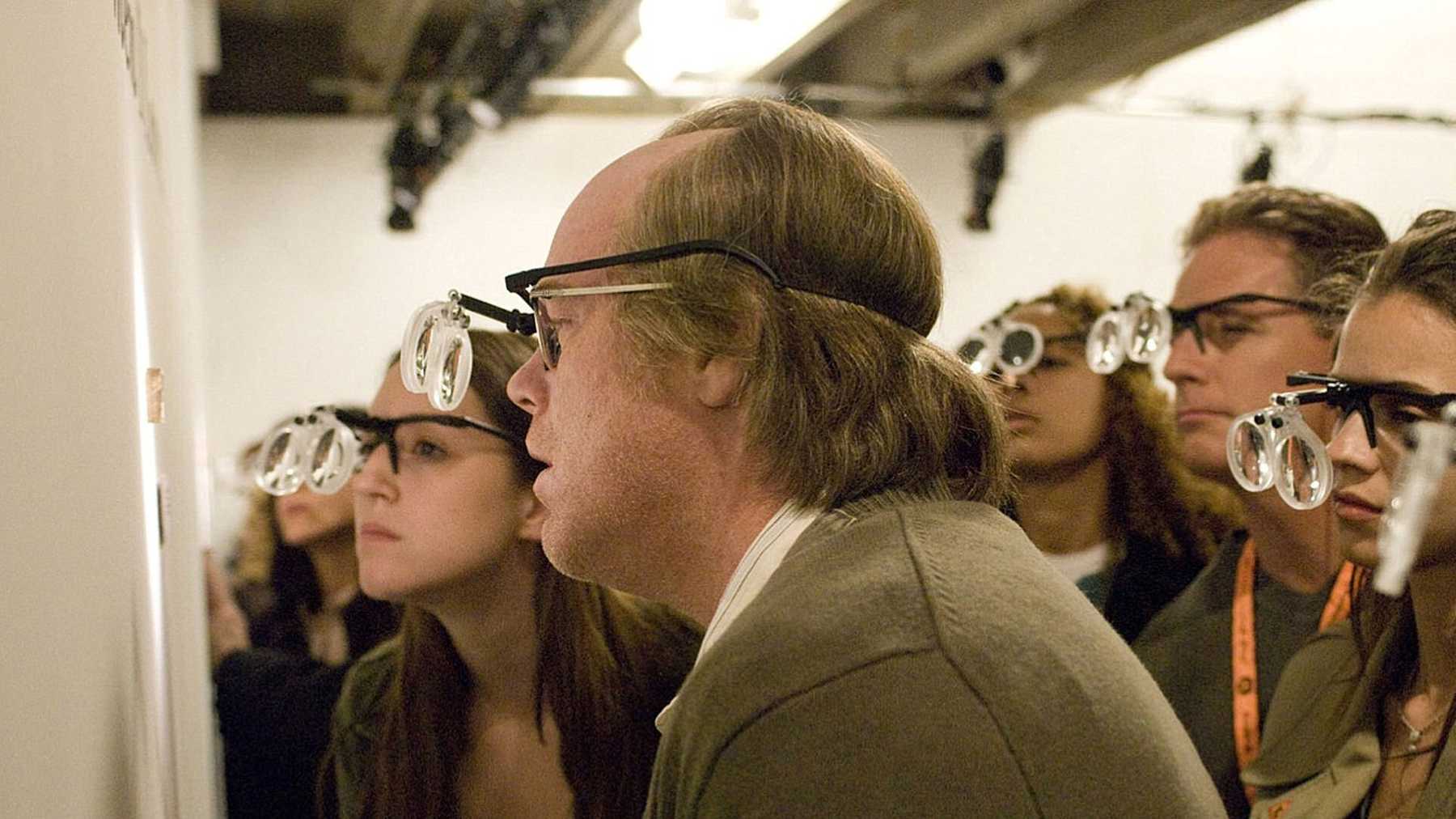 We also notice that the grandiose that Caden has become so invested in never really pans out for him. The play remains in the works forever, though being played out continuously. But it never gets an audience, and it never allows Caden the chance to prove his genius to the critics or his wife. Adele, on the other hand, becomes famous and celebrated and her exhibitions are always full of audiences who admire and celebrate her work. One could say that in this sense that the narrower her perspective gets, the better she starts to do in her life. On the other hand, the broader Caden’s vision of the play starts to get, the more loss of control he experiences, and the worse his condition gets.

Caden’s state, of body and mind, is also an important part of the plot. Things start to get bad for him, physically, when he is hurt in his house’s bathroom. He is advised to see an ophthalmologist, and then a neurologist, until eventually, he turns into someone who gulps down a handful of pills all at once, everyday. His body starts to deteriorate. He suffers from sycosis, and while he tells his daughter how it is different from psychosis, we already know that he has started to break down. This also becomes evident in the way he dissolves himself in the play and starts to lose track of time.

A year seems like a week, and his four-year-old daughter turns twelve and then dies on the brink of her adulthood. And all these years just fly by with Caden spiraling into the ever-increasing scale of his play. He reads his daughter’s diary, the one she had left at his house when she was four, and even til her death, he reads the lines he believes would be written by her. In an attempt to stay close to Adele, he enters his house as Ellen, the cleaning lady, and communicates with her through the notes she leaves for her. In all this time, he never gets to see her again, and this is where the true meaning of his play comes in too.

At the beginning of it, Caden says that he doesn’t know what he is doing really. From what it looks like, he is trying to find a meaning behind his life. By recreating it on the stage, and to see it by watching some actor playing him, he believes to have an outsider’s perspective on himself perhaps. We see him doing it, judging himself, or rather, judging Sammy as himself and commenting on what he thinks or doesn’t think, what he said on a particular day or didn’t. In the beginning, Sammy stays true to his character, where he employs his knowledge of all these years stalking Caden. But eventually, his own two worlds start slipping into each other. He falls in love with Hazel as Caden and in the end, he even dies as Caden. He does what Caden had tried to do long ago. This action of his also foreshadows how Caden’s show, or rather story, is supposed to end. It ends when he dies.

The Ending: What Happens to Caden? 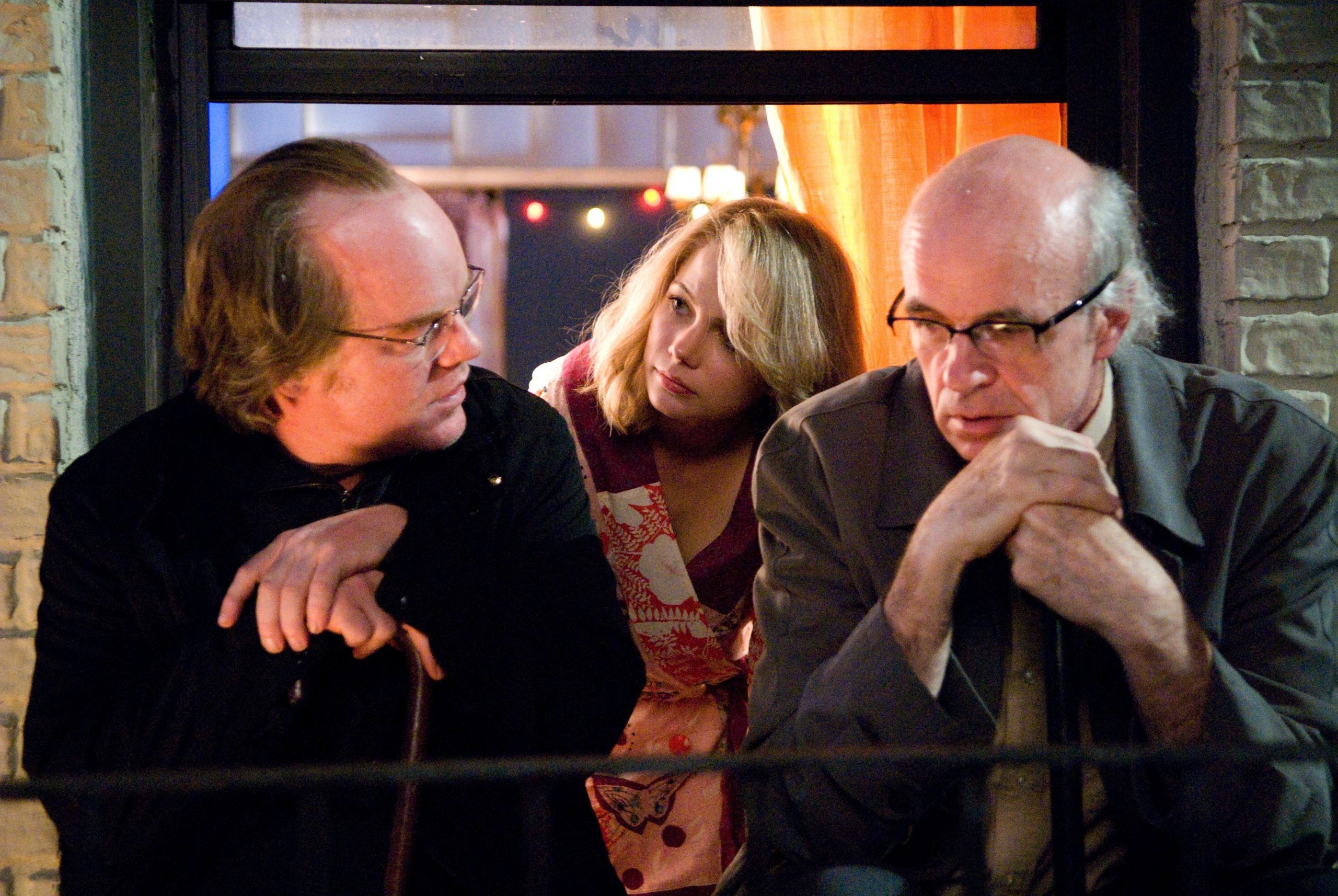 If there is the simplest way to understand what is happening in ‘Synecdoche, New York’, it is to remember Shakespeare’s quote: all world’s a stage, and all the men and women merely players. Extrapolate this, and you will understand that the play ends for an actor when they die, not when they expect the play itself to come to an end. We see the same thing happen for Caden. As the events unfold in the film, the stage becomes Caden’s life and this is where his drama finally comes to an end. After his play extends for years and years, so much so that the actress who had played Ellen’s mother’s role becomes old too, Caden knows what he wants to do with it when Hazel dies. But by then, everything has turned into chaos. As he walks around the stage, we see the fall of New York, which we can’t differentiate from the real world anymore. Everything has been destroyed, people are dead, and whatever Caden had wanted to do with it is lost now.

Another important point to note here is that by this time, even Caden has become an actor in his play. He lives in the closet that is modeled after the one that Adele had offered to Ellen. He is not even thinking for himself anymore as Millicent, who had initially played Ellen and then moved on to the role of Caden, on as well as off stage, feeds him lines and actions through the microphone. She tells him how to feel about his life or interaction with the old lady who meets him outside Adele’s apartment.

The film also leaves the hint of Capgras here, a word that is written on the nameplate outside Adele’s apartment. This is the condition where a person suffers from the delusion that all the familiar people in their life are not the real people but the impostors that have replaced them. For Caden, this becomes a reality of life where everyone in his life he now knows through the actors playing them. Speaking of this, our attention is also brought to Caden’s surname, Cotard, which is a form of delusion where a person tends to believe that they are dead and decaying. Death is an important theme of the film and we see Caden decaying in front of our eyes.

He mentions how he has been thinking about death a lot lately, and he worries that his life has no meaning. The movie also underlines the importance of how a person prefers to die, in the scene where Hazel buys the burning house. She expresses her doubts about buying the house because she doesn’t want to die of fire. And despite her reservations about it, she buys the house anyway and spends the rest of her life there. Through this, the film tells us that our choices have an impact on not just the continuation of our life but also the end of it. We are forever surrounded by the things that we don’t like or the things that scare us, and yet we live amongst those dangers and embrace that panic, which eventually claims our lives, as happens with Hazel. She dies of smoke inhalation, which is what she had feared while moving into the house. 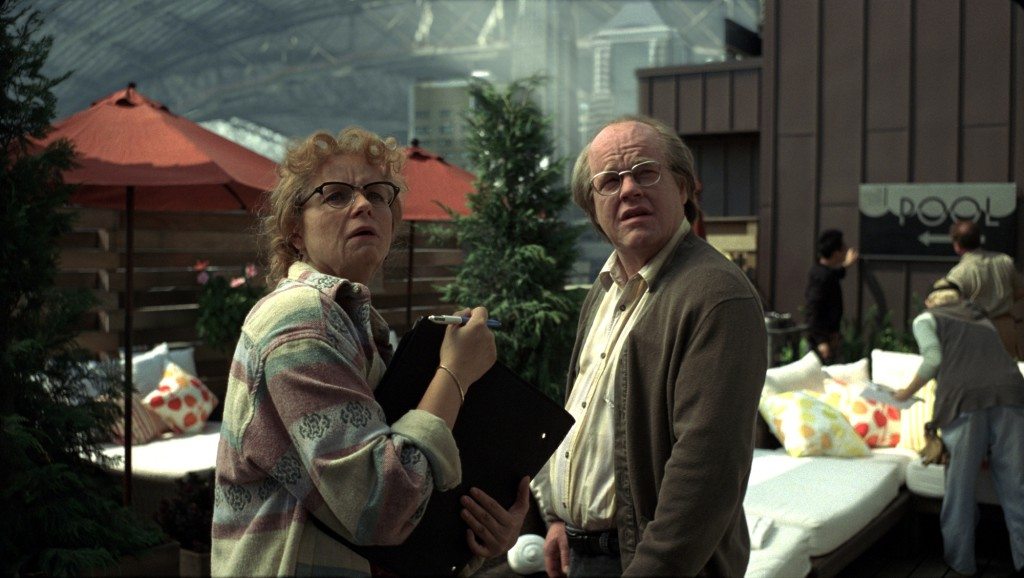 The death of Caden’s daughter, Olive, where the flowers tattooed on her body start to wilt and she dies when they die, also runs with the same theme. Adele’s death due to lung cancer, which had been hinted at in her messages to Ellen where we would hear her cough, follows the same path. In a similar manner, we see the death of Caden early on in the film, and only feel it at the end. The reason why Caden agrees for Millicent to play him is that she acknowledges that he is dead. Eventually, he lets go of that control when he takes a break from serving as the director of the play and decides to take the role of the cleaning lady instead.

In the end, when he tells Ellen’s mother that now he knows what he wants to do with the play, Millicent cues him to “die” and the story ends. Does this mean Caden is dead? It depends on how you saw him throughout the film. Did you accept his death when Millicent said it out loud or did you realize it before, when you caught him losing track of time, or when you saw Sammy die, whose job was to replicate the actions of Caden? Caden tells Sammy that he didn’t jump that day he saw Hazel with her family, that he was stopped by someone. But was he, really? Or did he jump and Sammy was simply following in his footsteps and completing the story as it had been? You might say that it is too fantastical an idea to entertain, but doesn’t the whole thing work around that fantasy?

How did Caden maintain the steady flow of funds to not just sustain his play for all these decades, but also keep enlarging its scale and population on his whims? How did the dying of flowers on the body of Olive mean her death, and how did a petal fall out of her arm when she let out her last breath? To separate one scene from the other and to understand things individually is not how this movie works. You have to see the entirety as the representation of its whole, and in its every separate scene, you have to see the themes reverberating through the entire film. This is how the movie justifies the “synecdoche” in its title.