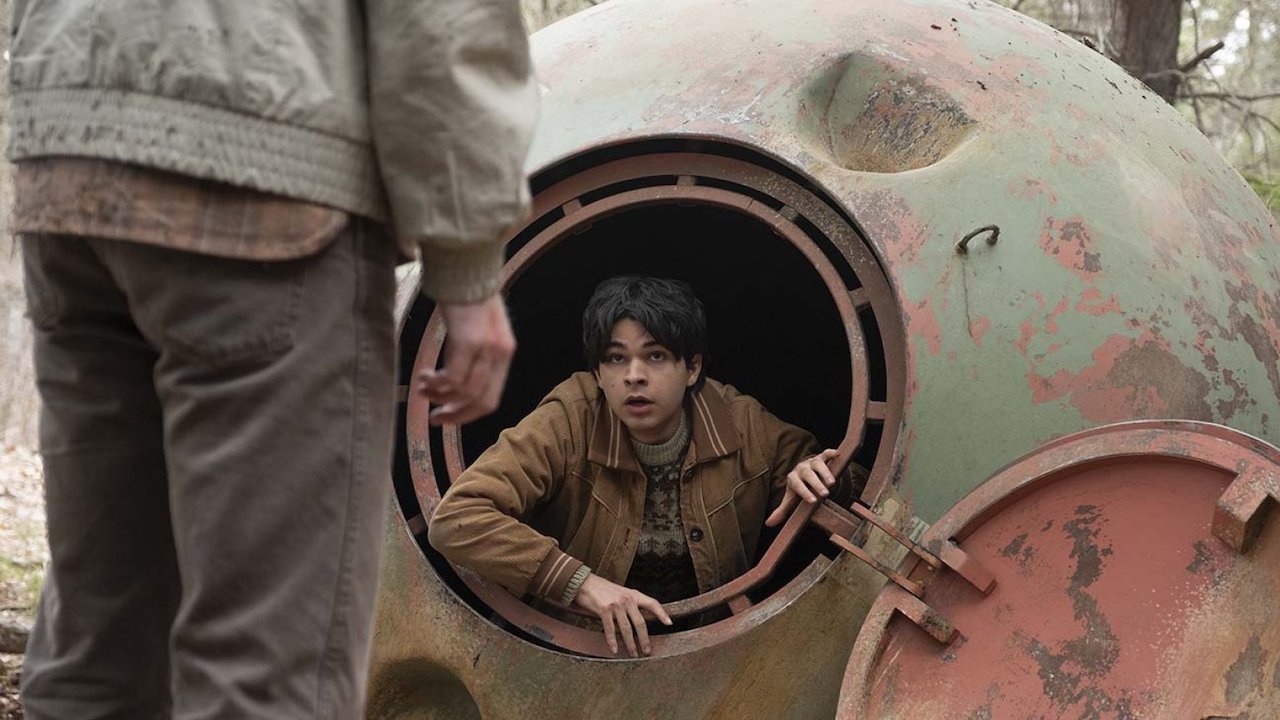 Amazon’s ‘Tales From The Loop‘ is a science-fiction television series that is more interested in telling stories about its human characters rather than its robotic, fictional technology. Hence, viewers expecting something more speculative like ‘Black Mirror’ or even ‘Stranger Things’ should keep that in mind.

Based on  Simon Stålenhag’s art book of the same name, the show is set in a small town that sits atop an experimental physics center. Using the visuals of the source material, the Amazon series manages to meditatively paint a calming yet introspective picture that becomes more detailed with every episode.

Tales From The Loop Episode 2 Recap:

The second episode of ‘Tales From The Loop’ is titled ‘Transpose’ and revolves around Cole’s brother, Jakob. Jakob is a self-conscious teenager who is too scared to ask a girl named May out. He has a popular and good-looking friend named Danny that he wants to be like. Jakob’s parents want him to join the Loop but he is more interested in sketching.

One day, Jakob and Danny hang out in the woods and come across a big, circular object that looks like a sea mine. Jakob climbs inside and hears whooshing. Outside, Danny ends up passing out and wakes up as….Jakob. To be clearer, Danny wakes up with Jakob’s mind/soul in his (Danny’s) body. On the other hand, Jakob has Danny’s mind/soul inside his (Jakob’s) body. The two switch bodies once again but decide on trying to take each other’s places for one day.

The next day, at school, Danny tells Jakob that he wants to try this new life for one more day. Jakob sees Danny (in Jakob’s body) kiss May and gets angry. Then, Jakob goes to his own house to meet Danny. Danny tells Jakob that he kissed May because he (Danny) wanted to do something for Jakob. Jakob wants to switch again, but Danny does not. The two get into an altercation and Jakob’s father asks Jakob (in Danny’s body) to leave.

Jakob does not come to school. He goes back to the sea mine like an object in the woods and climbs inside. Danny goes looking for Jakob near the woods and finds him unconscious. Jakob (in Danny’s body) is hospitalized. Danny (In Jakob’s body)  tells Jakob’s parents that he wants to join the Loop.

Danny sees a few men dismantling the sea mine-like machine. Later, Danny hears a noise and goes outside. He sees a blue robot there. “Jakob?” Danny asks the robot. The robot runs away.

Towards the end of the second episode of ‘Tales From The Loop,’ Danny (in Jakob’s body) speaks to a robot and asks whether it is Jakob. Then, the robot runs away. Now, this raises a lot of questions in viewers’ minds. What happened to Jakob? Will Danny continue living in Jakob’s body?

The answer is not as complex. Jakob (in Danny’s body) had gone to the woods after realizing that he wants his life back. Angry at Danny, Jakob tries to make the situation return to normal himself by climbing into the sea mine-like object. However, the object switches the bodies of the person inside it with the person outside. But, when Jakob goes there the second time, he is alone. Hence, there is no other human around him.

The robot is often seen in the woods. Hence, it is very possible that the robot was the closest object around the sea mine when Jakob climbs inside. Thus, Jakob’s mind/soul is transferred to the robot and he is compelled to live inside the robot’s body for the rest of his life. The sea mine-like object has been dismantled. Hence, in all probability, Danny will have to continue living his life as Jakob while Jakob will be confined to living a robot’s life.