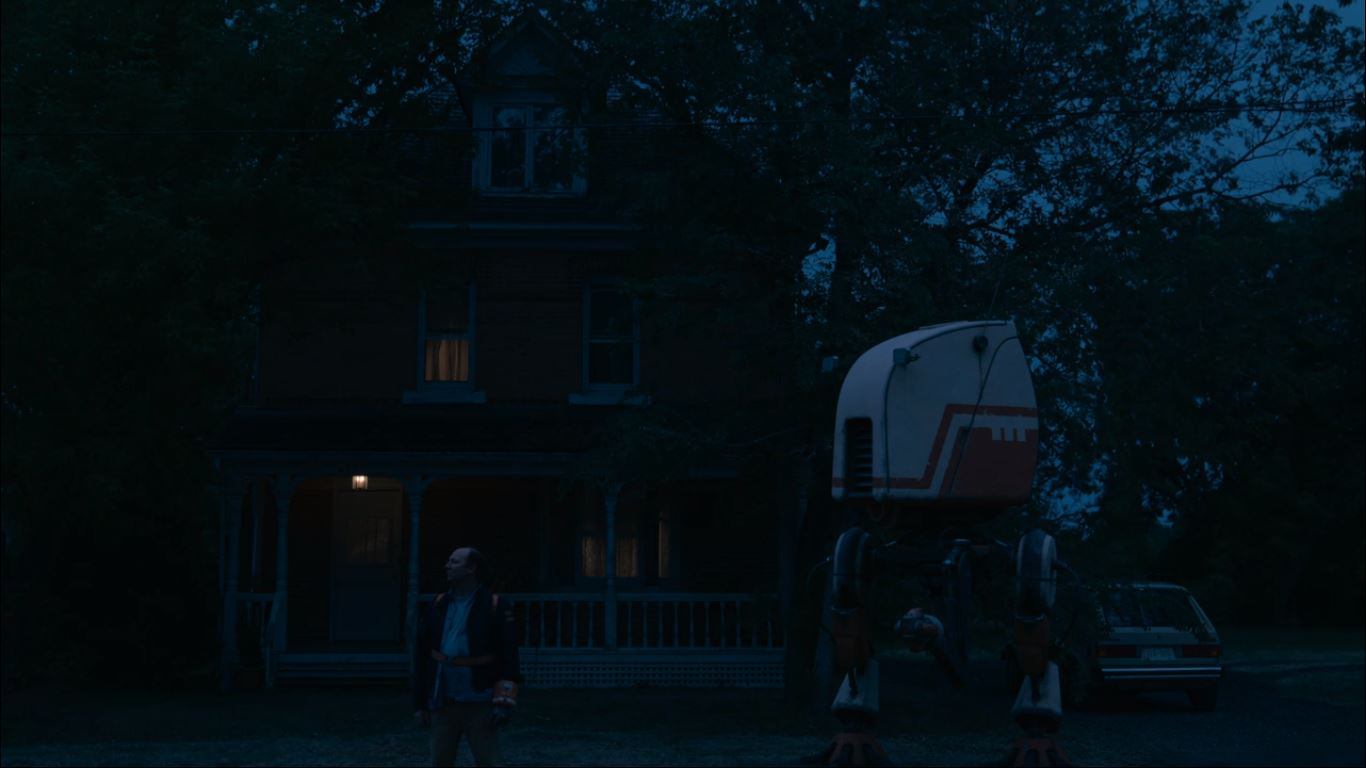 ‘Tales From The Loop’ is a science-fiction anthology series based on Simon Stålenhag’s art book of the same name. It tells human-centric stories set amidst a retrofuturistic background. Each episode revolves around a different resident of the town of Mercer, the setting of the series. Mercer is depicted to be situated above an experimental physics center.

Tales From The Loop Episode 5 Recap:

Danny’s father, Ed, works as a repairman. While working at a field, he sees an egg fall on the ground. The fuse at Ed’s house trips. Ed resets the fuse. His wife, Kate, wants him to permanently fix it by borrowing money from her brother. Ed refuses to do so.  Ed’s coworker tells him that somebody had broken into his house (his coworker is referring to the time May entered his house in the third episode). Then, Ed sees a few boys troubling his deaf-and-mute daughter, Beth, on the street. They run away with her toy upon seeing him.

The fuse at Ed’s house trips again. Then, he sees Beth looking outside the window and a boy downstairs running away from the house. Ed calls the police. Kate tells the police officers that she does not feel safe. The next day, Ed asks his boss for an advance. With that money, he buys a robot from a scrapyard. The robot mimics the actions of the person wearing a suit, which is like its remote. Ed intends to use the robot for the defense of his family.

Ed starts to stand outside his house all night long, along with the robot to protect his family. He even teaches Beth how to use it. The neighbors get concerned for their safety after seeing the robot. The police tell Ed that they will be monitoring the situation because of his neighbors’ complaints.

At night, Jakob comes to see Beth. It ought to be remembered here that it is not really Jakob who is visiting Beth. Danny’s mind/soul is inside Jakob’s body after the events of the second episode. So, it is actually Danny who is visiting Beth, but we will refer to him as “Jakob,” It is revealed that Jakob was the person that Ed saw running away at night. Beth knows that Jakob is actually Danny. Jakob has recovered Beth’s toy and leaves it in the garage.

The next day, Ed returns home to find a note from Kate informing him that she and Beth have gone to stay with her (Kate’s) brother. A shot of the broken egg seemingly moving back in time, fix itself, and return to the nest is shown.  Ed returns the robot and gets his money back. Using that money, he fixes the fuse permanently. Then, he calls Kate back. At night, Beth sees her mother and father talking…

Tales From The Loop Episode 5 Ending Explained: What Happens to the Egg?

The fifth episode of ‘Tales From The Loop’ ends in a seemingly straightforward manner like several other episodes of the show. One thing that viewers ought to remember is that ‘Tales From The Loop’ is extremely human-centric with a sharp focus on character study. Hence, almost all the episodes connote something about the psyche/personality of the central character.

This episode turns out to be aptly titled. It is about Ed’s controlling attitude, after all. The plot is set in motion when Ed sees an egg break. That event subconsciously affects him a little, especially given the fact that his son, Danny, has been in a vegetative state for a long time. After that, when he hears his coworker talking about a break-in, he gets even more concerned about his family’s safety. Gradually, the episode reveals how he starts to get increasingly paranoid.

He starts to ignore things that actually need fixing (like the fuse) and obsesses over threats that do not actually exist. His masculinity also affects his judgment: he assumes that he is the man of the house and hence, the only one responsible for looking after the family. It is almost as if he wants to prove himself to his wife and daughter that he can be an able provider. The family faces financial constraints, and Ed probably feels ashamed and inept because of that.

Now, the egg breaking, in my opinion, is just a narrative device. It does not actually happen. That is, the egg does not go back in time and fix itself. Instead, the scene signifies how, after Ed sees things for what they are, his family reunites. The egg symbolizes family here and it is easy to see how it only functions as symbolism rather than something that actually happens.

The last scene, where he is shown talking to Kate, connotes how he finally opens up to his wife and stops feeling as if he is responsible for everything. He lets go of control and embraces the unpredictability of the world. By doing so, he can talk about his feelings, connect with his wife, and stop fretting over stereotyped responsibilities that come with being the “man” of the house.