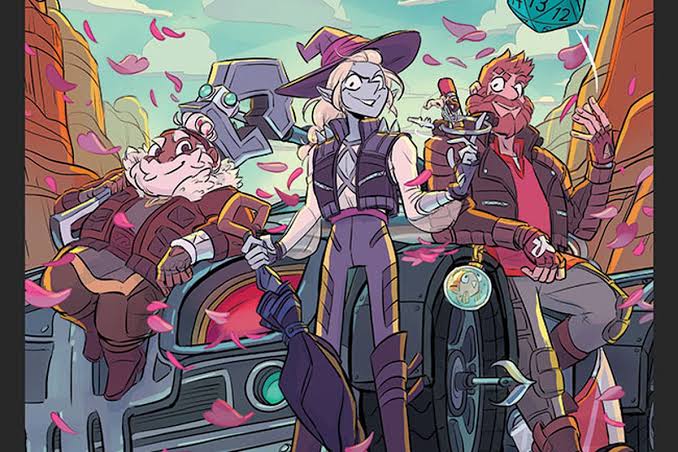 Games, adventures and comedy- who doesn’t like these things! If something manages to get all three of them in the same mix, then there can be nothing better than that. ‘The Adventure Zone’ performs this task with such finesse that you can’t help but binge-listen to all of its episodes.

Distributed by Maximum Fun, the podcast is mainly inspired by the style and campaigns of ‘Dungeons and Dragons’. Its popularity is through the roof and with every season, it only gets better. Its success has resulted in two graphic novel adaptations of its campaigns, with another on the way. It is the best podcast for fantasy and adventure fans.

Who Are the Hosts of The Adventure Zone Podcast?

‘The Adventure Zone’ is hosted by Justin, Travis and Griffin McElroy and their father, Clint McElroy. The brothers have previously collaborated on another comedy podcast, ‘My Brother, My Brother and Me’, which is also produced by Maximum Fun. Clint McElroy is a former radio personality and has also served as the writer for various comics like Green Hornet and War of the Realms.

In every season, one of the McElroys takes the position of the Dungeon Master and runs the campaign, while the others support him to move the story forward. The first and the second campaign, i.e., The Balance Arc and the Amnesty Arc, were DMed by Griffin. For shorter campaigns, others have taken the lead. Commitment Arc was under Clint, while Dust had Travis as the game master. Travis McElroy is also set to DM the Graduation Arc.

What’s The Adventure Zone About?

‘The Adventure Zone’ follows a different story arc every season. The first season followed the story of powerful magical artefacts and the quest of the Bureau of Balance to find and destroy them while keeping their existence a secret. The Amnesty Arc had a ‘monster of the week’ sort of scenario and was set in a small town that is visited by monsters of all shapes and sizes.

The third season focuses on a special school where the students enrol to become future heroes or villains. There is a proper curriculum to teach them everything, from using their amazing powers to accounting! But, each superhero needs a sidekick and every villain needs a henchman. And this where the main subject of the Graduation arc lies.

By now, everyone knows what it takes to be a great hero and how evil you need to be a supervillain. But the job of the second-in-command is also important. How do you become the best sidekick of all time? You’ll learn all about it in The Annex, the side-project of the Heironymous Wiggenstaff’s School for Heroism and Villainy. The education is top-notch, though not served with the same enthusiasm as the primary course.

The Adventure Zone Season 3 Release Date: When Will It Premiere?

‘The Adventure Zone’ Season 3 premiered on October 31, 2019. The episodes air every second Thursday, and it builds upon an overarching storyline for the season. The Graduation Arc marks a return to the original setup for the podcast and introduces a completely different world to the audience.

After the success of the first campaign, which stayed true to the Dungeons and Dragons pattern, the podcast took a different turn in the second season. While it was still great, some fans didn’t like the straying from the original path. With the third season, these qualms have been put to rest and the podcast continues to increase its fanbase.

Since the third season has only just begun, it is too early to speculate about the fourth season. It depends entirely upon how long the Graduation Arc takes to complete. The first campaign took place over the course of 66 episodes, which amounted to three years. Since then, there have been mini-arcs in quick successions.

The Amnesty Arc had 36 episodes, plus two wrap-up ones, and it took more than a year-and-a-half to get through with it. The Graduation Arc is also supposed to be a full-length campaign, and we can expect it to stretch through the entirety of 2020. The good news is that there’s never too much time difference between the season. This means ‘The Adventure Zone’ Season 4 will premiere sometime in 2021. We can also expect some mini-arcs in between.

Where Can I Listen to The Adventure Zone?

‘The Adventure Zone’ lives up to its name and delivers an adventurous time to its listeners. With two full seasons, and a third currently airing, and a couple of mini-arcs, there is enough for you to keep yourself occupied for a very long time. You can catch all episodes of the podcast on Maximum Fun. You can also listen to it on the podcast apps like iTunes, Google Podcast, Spotify, or any other app you like to use. Have a look at the trailer of the third season here: