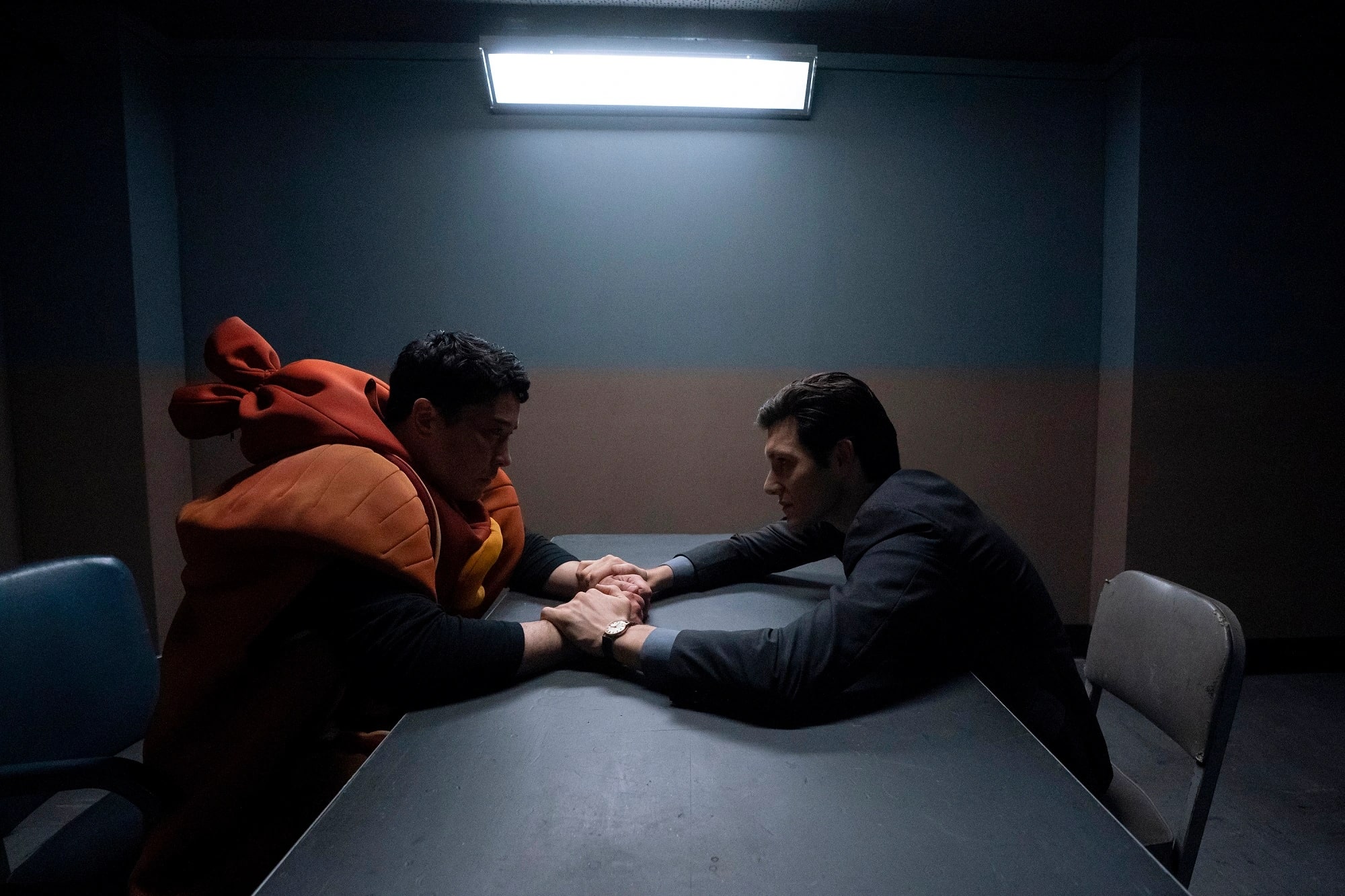 Created by David E. Kelley, known for developing shows such as ‘L.A. Law,’ ‘Boston Legal,’ and ‘Goliath,’ ‘The Calling’ is a Peacock Crime drama series. The story revolves around Avraham “Avi” Avraham (Jeff Wilbusch), an NYPD detective with exceptional deductive skills and impressive interrogation techniques. Avi is also a devout Jewish, with his faith governing how he approaches his life. At the start of season 1, a greener detective, Janine Harris (Juliana Canfield), convinces their captain, Kathleen Davies (Karen Robinson), to let her be Avi’s partner, even though he prefers to work alone.

‘The Calling’ is the TV adaptation of the ‘Avraham Avraham’ or ‘The Calling’ novel series by Israeli author Dror Mishani. The first four episodes of the first season are based on the inaugural entry in the novel series, titled ‘The Missing File.’ For the remaining four episodes, Kelley and his team adapted the second book, ‘‘A Possibility of Violence.’ So, two separate sets of mysteries are investigated and solved in the course of the season — the first group in episode 4 and the second group in episode 8. Here is everything you need to know about the ending of ‘The Calling’ season 1. SPOILERS AHEAD.

‘The Calling’ begins by establishing its protagonist’s ability to empathize with people — victims and perpetrators alike. Avi interrogates a man in a hotdog mascot costume and almost guides him toward confessing that he killed a man in anger. It is also when he meets Janine for the first time. She watches the interrogation and speaks to Captain Davies immediately after, latching herself onto Avi. Janine is ambitious. She has become a detective only recently but is already planning the next step in her career and intends to hold a political office in the future.

While Avi interrogates the man in the hotdog costume, Nora arrives at the precinct to register a missing person case. Avi, who is understandably distracted, tries to assure Nora that her son is acting his age and will be back soon. Unfortunately, by the time the people realize that the boy is indeed gone, it appears to be too late. The missing boy, Vincent, lives in a Brooklyn apartment complex with his parents Nora and Leonard and sister Olivia. The family is particularly close to Zack and Dania Miller, their neighbors. Zack is an aspiring author who used to teach writing to Vincent before his disappearance. As Avi attempts to unravel the case, he also begins suspecting John Wentworth, a disgraced and homeless former college professor who had grown close to Vincent.

As mentioned above, the last four episodes revolve around a completely different mystery. A daycare center run by Anna Harvey receives bomb threats. However, Anna initially ignores them, seemingly believing that they are from her landlord or competitors. But then, she gets a horrible reality check when someone does send a device. While it doesn’t have explosives, it prompts the NYPD to look into the matter. While investigating this case, they discover that one of the patrons of the daycare, Elizabeth Serra, is missing. She is Supposed to have gone to Mexico City, Mexico, to visit her parents, but she isn’t there.

Technically two episodes serve as the finale, providing conclusions to two sets of mysteries in the first season of ‘The Calling..’ The case involving Vincent’s disappearance brings forth dark and disturbing secrets about a family, whereas the bomb threat case turns out to be the result of infidelity and bitterness.

The Calling Season 1 Ending: What Happened to Vincent Conte?

The central mystery of the first four episodes revolves around the mysterious disappearance of Vincent Conte. As Avi and the team begin their investigation, they initially believe that he has run away, especially after realizing how toxic the environment at his home was. Leonard constantly belittled his son, passing snide remarks at what he perceived as mediocrity. But as the series progresses, it becomes increasingly apparent to the detectives that foul play is involved.

Vincent’s best friend reveals to the detectives that a girl kissed Vincent. But Avi speaks to Vincent’s high school crush. He discovers that it wasn’t her who kissed Vincent. Eventually, Dania admits to the police that she kissed Vincent, who was a minor at the time. Moreover, her husband knew about it, as he was told by Vincent himself.

Avi realizes that whatever happened to Vincent, he never left the apartment complex. Realizing that the Millers are innocent — at least in the case of Vincent’s ultimate fate — Avi uses them to set up a trap for Vincent’s family. Dania calls Nora and speculates that Zack is in contact with Vincent, a notion Nora dismisses. Under normal circumstances, a parent would try to hold on to any hope and believe any probable theory about their missing children. Avi theorizes that Nora refuses to believe Zack and Vincent are speaking to each other because she knows what happened to her son.

So, Avi convinces Nora to come to the precinct and makes her believe they have found Vincent’s body. The truth then comes — at least partly. According to Nora, Leonard walked in while Vincent was sexually gratifying himself in front of Olivia and angrily pushed his son, who was accidentally killed. The police initially believe this. But then, Dania tells Avi that anyone who knew Vincent would say that he was incapable of doing the things he was being accused of doing, making Avi realize that it was Leonard, who sexually assaulted his daughter, and Vincent accidentally came upon them. What happened to him was very much deliberate on Leonard’s part. Leonard then put Vincent’s body in a large bag and threw it into the harbor. After the police confront Leonard and arrest him, Avi and the team realize that Nora likely knew about the abuse. As for Olivia, she didn’t say anything because she was too traumatized by the incident.

Who Is Sending the Bomb Threats? Who Attacked Anna?

The idea that someone would send bomb threats to a daycare center is absurd in itself, but ‘The Calling’ frames it as a crime stemming from bitterness and anger. Anna, the owner of the daycare, was having an affair with one of her patrons, Brad Holt. However, she knew how vindictive Brad’s wife Marcie could be, so she tried to break things off between her and Brad. The latter responded to this violently and obsessively. He was the one who was sending the bomb threats and left the device with any explosives inside the daycare. Anna was so afraid of him that she agreed to sleep with him to prevent him from hurting the children. Brad was also the one who attacked her in the streets. He likely thought he could get away with it while he was still not the prime suspect for the bomb threats.

What Happened to Elizabeth Serra?

Elizabeth, like Vincent, is a victim of the actions of people close to her. In their investigation, Avi and the team learn that Elizabeth was having an affair with Peter Hanney, one of the wealthiest men in New York. They initially presume that Elizabeth was planning to leave both her husband and Hanney behind and go to Mexico City with her children. Hanney about financial ruin for the Serra family by tricking Paul into making bad investments in cryptos. He intended to make Elizabeth leave Paul. Ultimately, Paul killed Elizabeth because she was ready to leave him for Hanney. He then buried her body at his work site. Facing the prospect of jail and a permanent separation from his children, Paul tries to break out of the precinct. When that proves to be impossible, he commits suicide by cops.

Is John Wentworth Dead? Is He a Victim or Killer?

The final — and as of yet, unsolved — mystery involves the death of John Wentworth. Avi and Janine go to investigate his death in the final sequence of the season. Wentworth can be seen lying in the pool of his blood. Just then, a police officer declares over the radio that a murder suspect with Wentworth’s physical description is on the run. Janine subsequently finds a gun on Wentworth and wonders whether he is a victim or a killer, prompting  Avi to reply that Wentworth was his friend.

Given that the last time they saw each other, Wentworth wanted to give what he claimed to be valuable information in exchange for money, it’s highly possible that he was killed because people found out about his intentions. Avi spots that someone has written “father” in Hebrew in blood on Wentworth’s head. That makes the killing seems ritualistic, as if the real perpetrators wanted to send a message.

Read More: Is The Calling Based on a True Story?