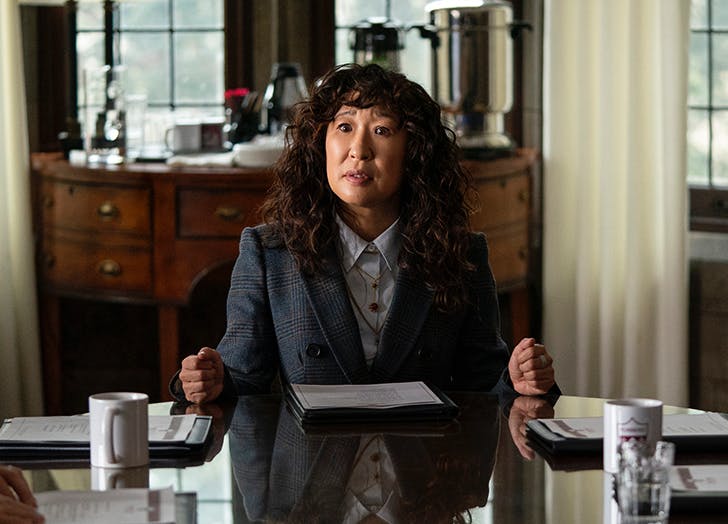 Netflix’s ‘The Chair’ is an insightful comedic drama set amidst the workings of a prestigious university. The show’s story follows Dr. Ji-Yoon Kim, the newly-appointed head (or chair) of the English department at Pembroke University, as she meets the challenges of being the first woman to hold the post. Being one of the few people of color on the faculty also brings complications as she wrestles with the archaic systems in place and her eccentric colleagues who have thrived in it for so long. A nuanced story that doesn’t waste time tying up the ending but instead leaves us with a lot to ponder over, we decided to go back and take a closer look at ‘The Chair’ season 1. SPOILERS AHEAD.

The season opens with Ji-Yoon being appointed to her new position as Chair of the English Department and settling into her new office. Her colleagues consist largely of archaic intellectuals in the twilight of their teaching heyday, who refuse to take criticism and hold on to old-fashioned ideas. Ji-Yoon is soon summoned by the Dean, who informs her that financial constraints and low enrollment numbers in English classes require her to force some of these very same colleagues into retirement.

The already flustered, newly appointed chair then has to bring her star colleague Bill, an author of middling fame, into line for his repeated late appearances to his own lectures. During one of his classes, Bill inadvertently does a Nazi salute, which is caught on camera by many of his students, and the video clip subsequently begins to spread like wildfire.

Ji-Yoon’s domestic life seems equally chaotic, where her young adopted Latin daughter Ju Ju and her Korean father seem unable to communicate with each other and yet have to spend all day together. The single mother gets repeated calls from Ju Ju’s school, complaining about the child’s disturbing artwork and behavior. Soon, Bill is suspended because of his multiple indiscretions but proves to be a healthy companion for Ju Ju, who opens up to him. However, the Dean then proposes replacing him with David Duchovny (who makes an entertaining cameo as a self-obsessed celebrity hoping to get his Ph.D. just so he can be called “Doctor.”)

Ji-Yoon finally succeeds in convincing Duchovny to make a donation to the university in exchange for an honorary doctorate and comes back victorious, only to find that one of the most promising faculty members of her department, Yasmin, has been offered a position at Yale. The young Black professor confronts Ji-Yoon for not standing up for herself and falling prey to the power politics of the university that have historically sidelined women and minorities. The Chair of the English Department eventually convinces Yasmin to stay back but now has to worry about the upcoming disciplinary hearing for Bill, which the Dean is setting up to ensure that the man is fired from his position.

The Chair Ending: Does Ji-Yoon Get Fired?

All manner of pressure continues to pile up on Ji-Yoon as she is forced to be the one to lead Bill’s disciplinary hearing and subsequently fire him. When Bill finds out, he is crestfallen and sees her actions as a betrayal of their long friendship. To boot, Ji-Yoon’s comments to a student get misinterpreted, and soon there is news of how she is trying to force students to not talk about Bill’s “Nazi incident.” In response to what they essentially see as a gag order, the students begin to protest in earnest. The Dean informs her that her own position is now in jeopardy, and with all this hanging over her head, Ji-Yoon commences Bill’s hearing.

Halfway through the sitting, she has an epiphany and realizes what a sham the whole process is and how the protesting students will not be pacified by the token changes being carried out. She announces as such and abstains from being a part of it. We then see Ji-Yoon heading a meeting of the English department, where the older members of the department attempt to pass a vote of no-confidence against her to make her give up her post. They succeed, and we then see Ji-Yoon sitting outside the university building with Bill, and the two talk about his plans to get his position at Pembroke University back.

Amidst the closing scenes, we also see Ji-Yoon absorbed in teaching her regular class, telling us that she has not been fired from the university despite the scathing (and misrepresented) articles about her trying to silence students. She tells her department that the Dean and others in the university administration wanted her “gone” but didn’t want an unlawful termination lawsuit on their hands and therefore did not fire her. However, because of the vote by her own department, Ji-Yoon loses her post as the Chair of the English Department.

Things are not all bad, and as Bill notes, she looks a lot calmer and happier now that she is back to teaching and not having to deal with all the other stressful tasks that come with being the chair of the department. This also subtly ties in with when Ji-Yoon’s father tells Bill that she was destined to be a teacher since she was a child, and no one could change her mind. It seems like Ji-Yoon is a teacher at heart and is truly in her element when teaching. Even the students, otherwise skeptical of her announcements, seem pacified and absorbed in her class as she teaches it.

Does Bill Get Fired? Does He Sue Pembroke University?

Bill, as expected, does get fired. Despite Ji-Yoon standing up for him at the hearing and saying that firing him will not change the system or pacify the students’ anger, the administrators relieve him of his duties. Of course, since Bill is a tenured professor, he has grounds for legal recourse against his dismissal, which is why he comes to his hearing with a lawyer by his side. Ji-Yoon also expects that he has sued the university and asks him whether he is now “filthy rich” from the settlement he got as a result.

However, in a twist, Bill reveals that he has chosen not to sue the university but instead fight to get his job back, something Ji-Yoon exclaims is next to impossible. However, like his former boss, Bill also realizes that his true joy lies in teaching, and suing the university would mean that he would likely never get another teaching job. Therefore, despite the financial burden of paying for his college-going daughter, Bill has chosen to fight to get his job back. We don’t find out if he gets it back but leave knowing that Bill will end up teaching somewhere, even if it is not at Pembroke University.

What Happens to Joan? Is She the New Chair?

Joan, who has been part of the Pembroke faculty for 32 years, grapples with the fact that she might be forced to retire without ever having her contributions to her field recognized. Relegated to a basement office in an obscure building, she spends most of her time trying to get someone to listen to her demands, even if they are just to get her wifi fixed. In the end, frustrated with the lack of importance given to her, she agrees to band with the members of the English department who aim to vote Ji-Yoon out of her post.

During the vote in the finale, possibly inspired by Ji-Yoon’s stand for Bill against the university Dean and his cronies, Joan votes not to have the chair removed. However, the vote still favors Ji-Yoon’s abdication, and she loses her post. In one last move of defiance, Ji-Yoon proposes that Joan be the next Chair of the English Department. The proposal, which passes, is highly fitting not just because it finally gives the senior faculty member the post and recognition (and office) she deserves, but it also continues the legacy of a woman being head of the English department, which Ji-Yoon started.

Do Bill and Ji-Yoon Get Together?

Bill and Ji-Yoon undoubtedly have chemistry, and the two have had sparks flying on multiple occasions. They are long-time friends and seem exceedingly comfortable around each other, be it wrestling in Ji-Yoon’s office or sharing a furtive joint during a faculty dinner. Ji-Yoon also speaks of Bill’s late wife affectionately. The one time Bill makes advances, however, Ji-Yoon refuses to go forward and says that nobody will take her seriously as the new chair if she is seen in a relationship with a professor from her department.

Right before Bill’s hearing, the two share a kiss but argue soon after when Bill realizes that Ji-Yoon plans on firing him. The show closes with the two back on affectionate talking terms but with no further hints about their relationship. However, seeing as Ji-Yoon’s post as the chair was holding her back, a relationship between the two could now blossom. Bill is now not even her colleague since he got fired and has shown himself to be exceedingly good with her daughter Ju Ju, which all points to the two of them possibly getting together soon.

Read More: The Chair Season 2: Everything We Know