The Curse of Bridge Hollow Ending, Explained: What is Inside the Boxes? 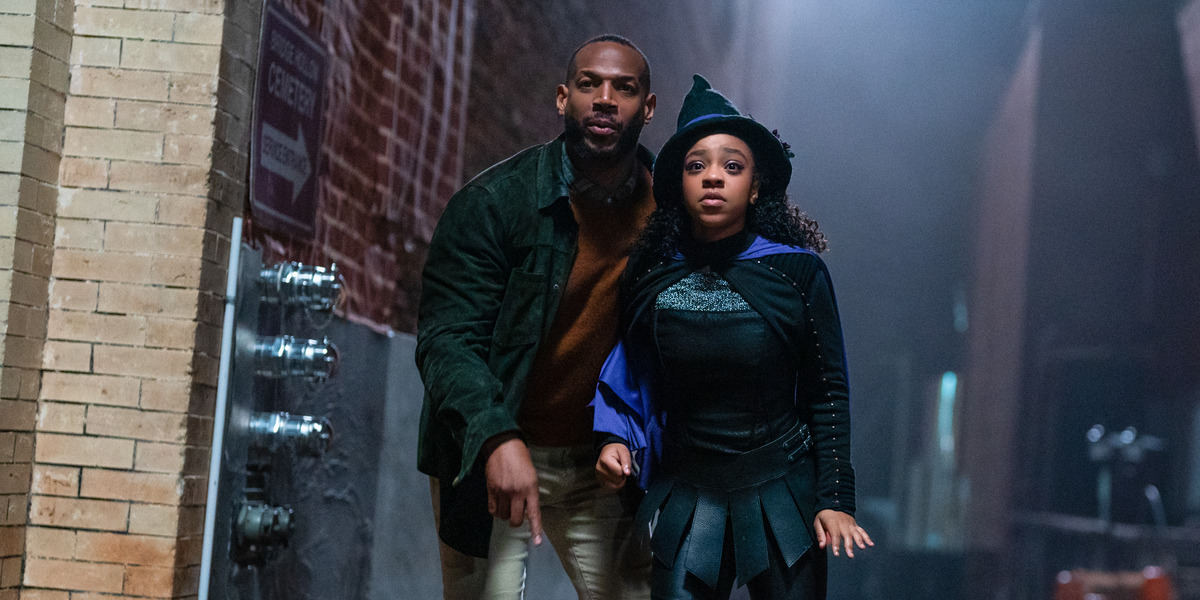 Netflix’s ‘The Curse of Bridge Hollow’ is an adventure comedy directed by Jeff Wadlow. It revolves around Sydney, a teenager who relocates to the titular town with her parents. However, Sydney soon discovers the dark secrets and sinister evil hidden inside her new home. After she inadvertently unleashes an unspeakable evil on the town during Halloween, Sydney teams up with her science teacher dad, Howard, to save Halloween and the town. If you are wondering whether Sydney and Howard succeed in their quest, here is everything you need to know! SPOILERS AHEAD!

‘The Curse of Bridge Hollow’ opens with Howard and Emily Gordon driving to the town of Bridge Hollow with their daughter, Sydney. The family is relocating to the town as Howard has been offered the job of science teacher a the local high school. However, Sydney is unhappy about the move from Brooklyn to a sleepy small town. Moreover, Sydney no longer wants to join the science team and is interested in the paranormal, much to her father’s disappointment.

The family settles into their new home on the eve of Halloween. However, Howard is irked by the town’s over-commitment to Halloween. Moreover, he refuses to let Sydney decorate the house and celebrate the spooky festival. Meanwhile, Mayor Tammy reveals that Bridge Hollow was once plagued by an evil spirit known as Stingy Jack. As a result, Halloween became an important festival in Bridge Hollow. Sydney learns that the house once belonged to Madam Hawthorne, a local witch known for capturing Stingy Jack.

While exploring the house, Sydney discovers a crypt that houses various boxes. Sydney uses an ouija board to talk with Madam Hawthorne. However, she instead speaks with a different spirit that leads her to a box, and she feels compelled to open it. Inside the box, Sydney finds a lantern holding Stingy Jack’s spirit. Sydney uses the lantern to decorate the house for Halloween. However, Howard is unhappy with Sydney’s decision to quit the science team, and the two argue. During their argument, Stingy Jack’s spirit is freed, and it moves across the town, turning Halloween decorations into its army.

Sydney realizes that Stingy Jack has escaped and threatens the entire town. However, Howard refuses to believe supernatural forces are wandering in Bridge Hollow. Nonetheless, Howard accompanies Sydney on the quest to uncover the truth about the strange events in the town. Meanwhile, Stingy Jack’s spirit tries to use its power and turn every day into Halloween. As a result, Sydney and Howard must set aside their differences to stop the evil spirit once and for all.

The Curse of Bridge Hollow Ending: Do Sydney and Howard Stop Stingy Jack?

As the narrative progresses, Syndey and Howard meet with Sydney’s new friends, who are paranormal experts. Meanwhile, Stingy jack marauders through the town and gathers the power necessary to execute his master plan. Sydney deduces that since Stingy Jack was freed after she chanted a spell, there must be a spell to trap the ghost again. Since Madam Hawthorne defeated Stingy Jack and trapped him in a lantern using a spell, the group decided to track down her book of spells. The book was auctioned after the Hawthorne house was sold.

Eventually, the group finds Principal Floyd is the book’s current owner. However, Principal Floyd reveals that he no longer has the book. As a result, the group is forced to find an alternate solution. They decide to summon the spirit of Madam Hawthorne using an ouija board. Madam Hawthorne tells them the binding spell she used to trap Stingy Jack. However, before the group can use the magic chant to stop Stingy jack, the ghost rises to full power and threatens to kill Emily.

Sydney and Howard arrive at their home just in time to save Emily. However, Howard refuses to let Sydney enter the house as the situation is too dangerous. Nonetheless, Sydney insists as she is the only one who can perform the spell. Howard promises that he trusts Sydney and believes in the supernatural. Therefore, Howard succeeds in using the encantation on Stingy Jack, and it works. The spirit’s power is reduced and forced to retreat into the lantern. Ultimately, Howard and Sydney set their different ideologies aside and stop Stingy Jack. The ordeal brings Howard and Syndey closer, and Howard learns to appreciate that science and the supernatural coexist in the world.

What Is Inside the Boxes?

After recapturing the spirit of Stingy Jack, things return to normal in Bridge Hollow. The quiet and sleepy town celebrates Halloween, and people return to their every life. Howard and Sydney better understand each other, and their relationship improves. In the final scene, Howard and Sydney ponder about what to do with the lantern that houses Stingy Jack’s spirit. The evil ghost’s quest to bring a forever Halloween to Bridge Hollow is foiled by the father and daughter. However, it still poses a threat and cannot be ignored. 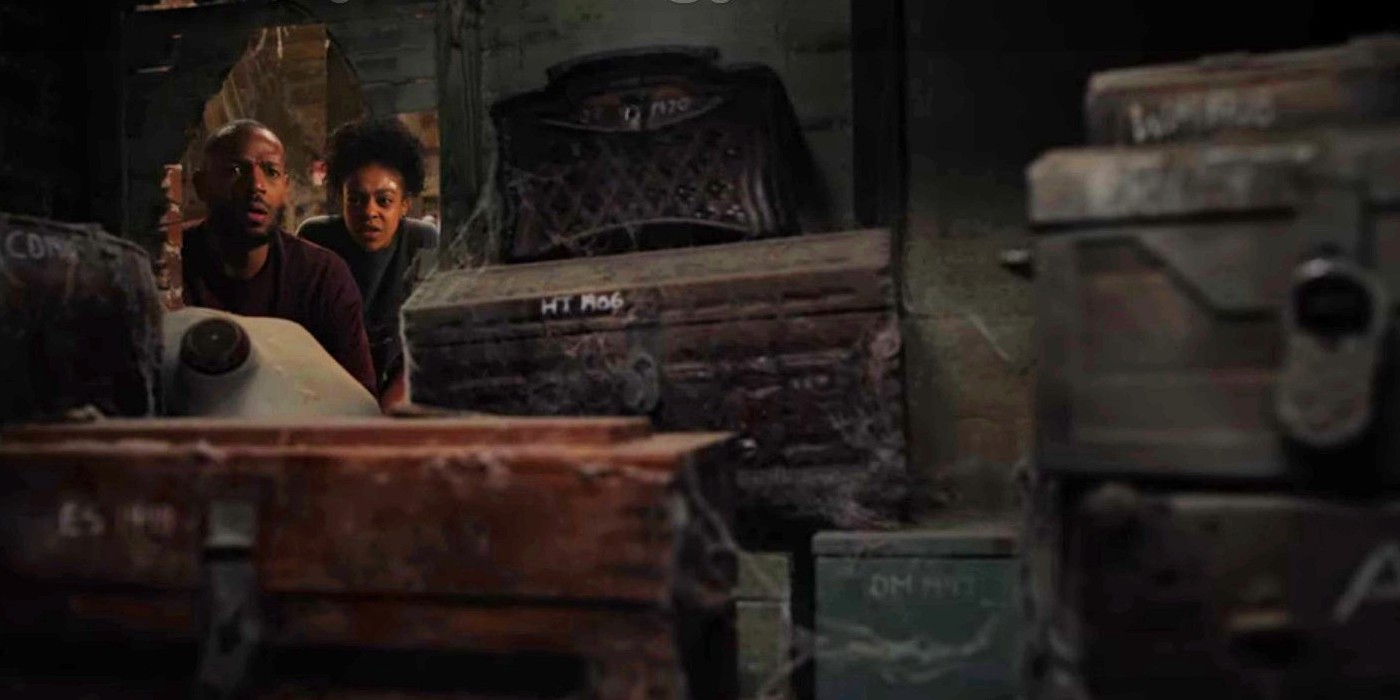 Therefore, Sydney and Howard return the lantern to the box Sydney found it in and ensure that no one will free Stingy jack again. However, a wall in the crypt accidentally breaks, revealing more boxes that resemble the one that houses the lantern. The film ends with the shocked reactions of Sydney and Howard. The final scene implies that the boxes in the house contain more evil spirits and sinister creatures.

The house belongs to Madam Hawthorne, who was famous for witchcraft. She likely fought with several supernatural forces and trapped them in the boxes using her magical powers. The town of Bridge Hollow is known for its Halloween celebration, implying that the town is a hot spot for supernatural activity. Therefore, the final scene hints at more threats for Sydney and Howard to deal with. There are likely various monsters related to different urban legends. As a result, the ending sets up more complex and riveting adventures for Sydney and Howard.

Read More: Where Was Netflix’s The Curse of Bridge Hollow Filmed?