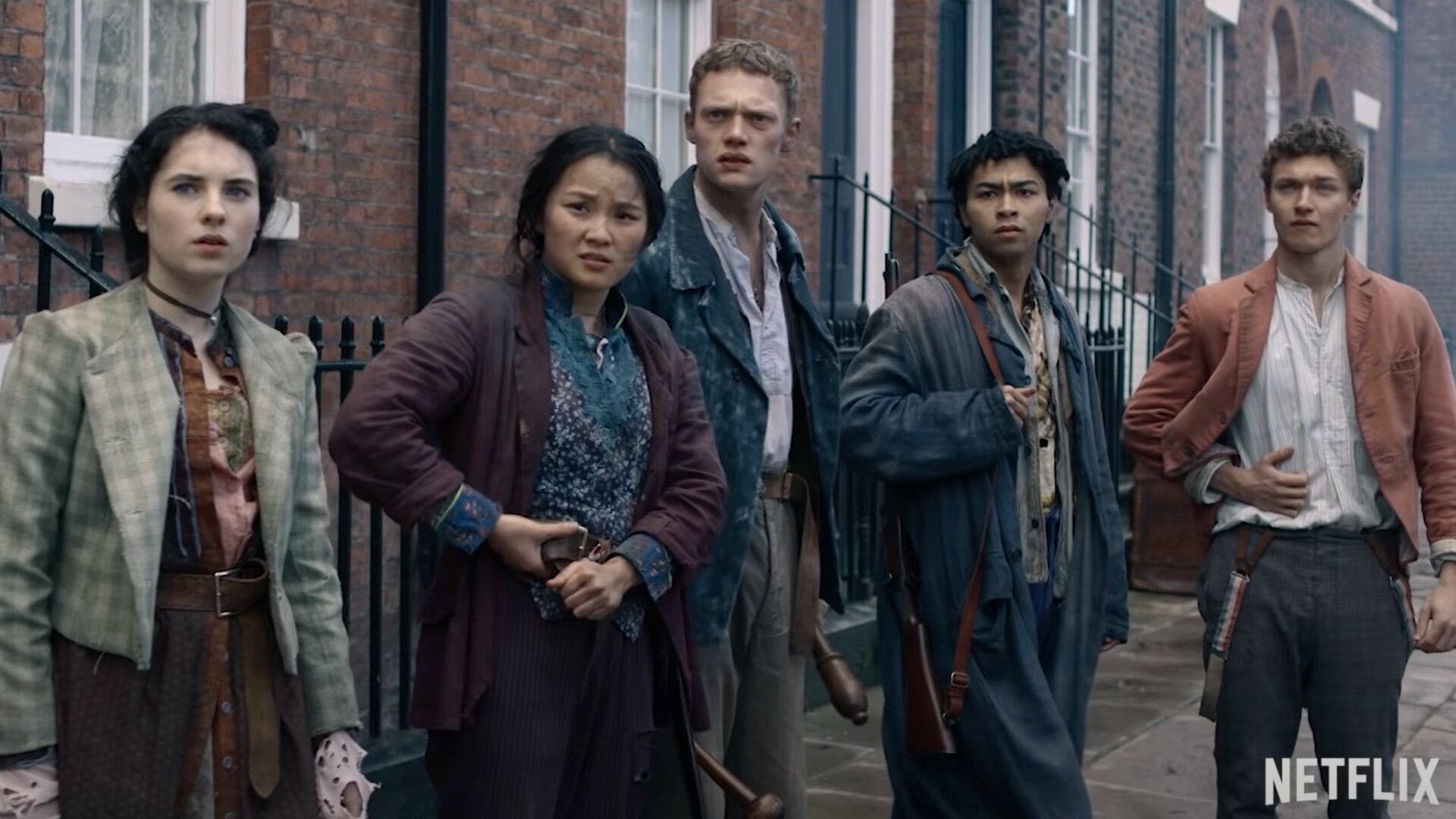 Created by Tom Bidwell of ‘Watership Down’ fame, ‘The Irregulars’ is a supernatural anthology drama set in the fringes of a Victorian-era London society. Loosely based on the minor group of “Baker Street Irregulars,” who are occasionally featured in Arthur Conan Doyle’s ‘Sherlock Holmes’ stories, the spinoff series seeks to create a parallel ‘Holmes’ universe by foraying into the supernatural. The narrative centers on orphans Beatrice, Jessica, Billy, and Spike, who look for odd jobs to make ends meet until they are approached by the suave and slick Dr. Watson for some help.

The creator succeeds in creating a gloomy and gritty alternative London in the vein of Guy Ritchie’s ‘Holmes’ installments, the only difference being rogue phantom villains who run amok in the streets. The first episode of the first season takes the audience to an aviary in search of a notorious bird master in a sort of happy marriage between Conan Doyle and Edgar Allen Poe, and if the end has left you puzzled, we are here to save the day. Let us decode the ending of ‘The Irregulars’ episode 1. SPOILERS AHEAD.

The episode begins with Jessie being haunted by evil spirits in her sleep. She walks a dungeon in her dream, and spirits flow by her. She walks with a lantern in her hand. After stopping at a dead end, she is apprehended by a “dark thing” which tries to strangulate her. She wakes up from the nightmare with drops of sweat on her forehead, and her sister, Bea, tries to console her.

The following morning, we get to know that it’s Bea’s birthday, and Jessica humors her with an invisible present. They may be poor but are not without a humane conscience. Bea goes out on the street while a hatted man watches her from his window. The address of the house where the hatted man lives, we are led to perceive, is 221B Baker Street, the rented home of the prodigal mastermind Sherlock Holmes in Conan Doyle’s stories, but Bea does not know that.

In a separate instance, Spike tries to talk Billy out of a prizefighting event, but Billy is desperate to find some money for his family. However, Beatrice arrives at the scene and succeeds in dissuading Billy from getting injured. On the other hand, princely but frail Leopold wants to go out of his posh and decadent palace on his birthday but is subordinated by his overbearing guardian, Daimler, who thinks that the city is not fit for people of “delicate constitution.”

Back in the cellar, the poor orphans try to figure out ways of subsistence. Spike gives the idea of moving to a workhouse, but the rest know only too well how that may end up for them. Bea, Billy, and Jess have all been to one, and they don’t want to go back. A somnambulistic Jessica walks out on the street, where she sees the same deadly apparition from before. Jess comes in front of Leo’s chariot, and Daimler’s misplaced anger at the seeming lowlife backfires on him.

While Bea’s argument leaves Daimler speechless, Leo is left in awe. On her way back from her mother’s grave, Beatrice is followed by the hatted man. We come to know that he is Dr. John Watson. Watson seeks help from Bea regarding an ongoing investigation of a series of child kidnappings in exchange for some money, and while Bea senses trouble, she could use the money. The investigation leads them to a slippery ornithologist called Arthur Hilton, who can manipulate “unkindness” (an archaic word for a flock of ravens) to commit heinous crimes.

We are told at the beginning of the story that Jessie is mentally unstable, and as she is troubled by her recurrent nightmares, a worried Bea infers that her sister is indeed “falling into pieces.” The audience gets to know that Jessie and Bea’s mother also went mad, and her symptoms started with nightmares of a similar kind. Madness was an aberration in Victorian England, and the victims of mental illnesses were stigmatized with fear, disgust, and contempt.

But at the end of the story, we come to know that Jessica is endowed with a special kind of gift – to read people’s minds by touching their arms – and the nightmares are only secondary consequences of the awakening of Jessica’s supernatural powers. In late 19th century Britain, modern psychology was still in a nascent state, and medical science was still governed by the belief that psychological deviations are caused by imbalances in bodily humor.

In the modern world, however, Jessica would seem quite normal as a teenager. However, the recurrent nightmares may be the manifestation of a past trauma that she has repressed within her. The “dark thing” that visits her in her dreams wears a plague doctor’s costume, recognized by the protruding beak mask. The “plague doctor,” who rose to popular imagination during the bubonic plague, has been christened as a symbol of death and doom.

How Much of the Story is taken from Arthur Conan Doyle?

In Conan Doyle’s original Holmes series, the “Baker Street Irregulars” are a bunch of sneaky street urchins who help Holmes in his investigations. The fictional group appears in ‘A Study in Scarlet’ and ‘The Sign of the Four.’ We know that a pageboy called Billy helps Holmes in one of his cases, namely, ‘The Adventure of Mazarin Stone,’ and that’s the only link that seems to connects the contemporary series with Arthur Conan Doyle’s legacy. The story also features Dr. Watson, who assigns tasks to the misfits, but Holmes himself is obscured and relegated in the plot as the orphans take center stage. 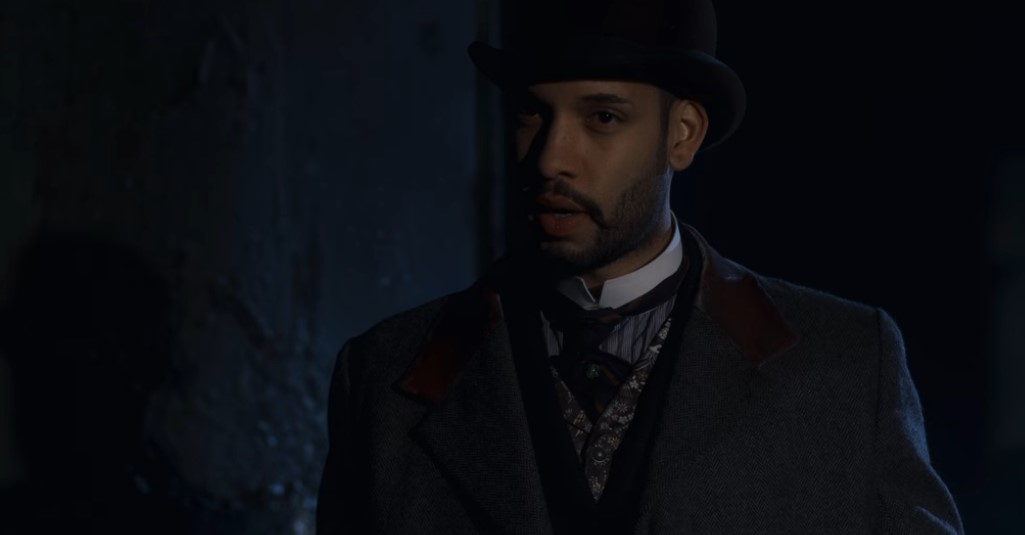 Apart from these minor connections, the series pretty much turns the ‘Holmes’ universe on itself, exposing the fringes of Victorian London. In place of rational and cunning villains of intellect and merit, we encounter evil supernatural forces who are maddened by grief. While in Doyle’s rational and progressive world, Holmes solves cases with sharp intelligence. But the world of ‘The Irregulars’ would require the protagonists some divine assistance.