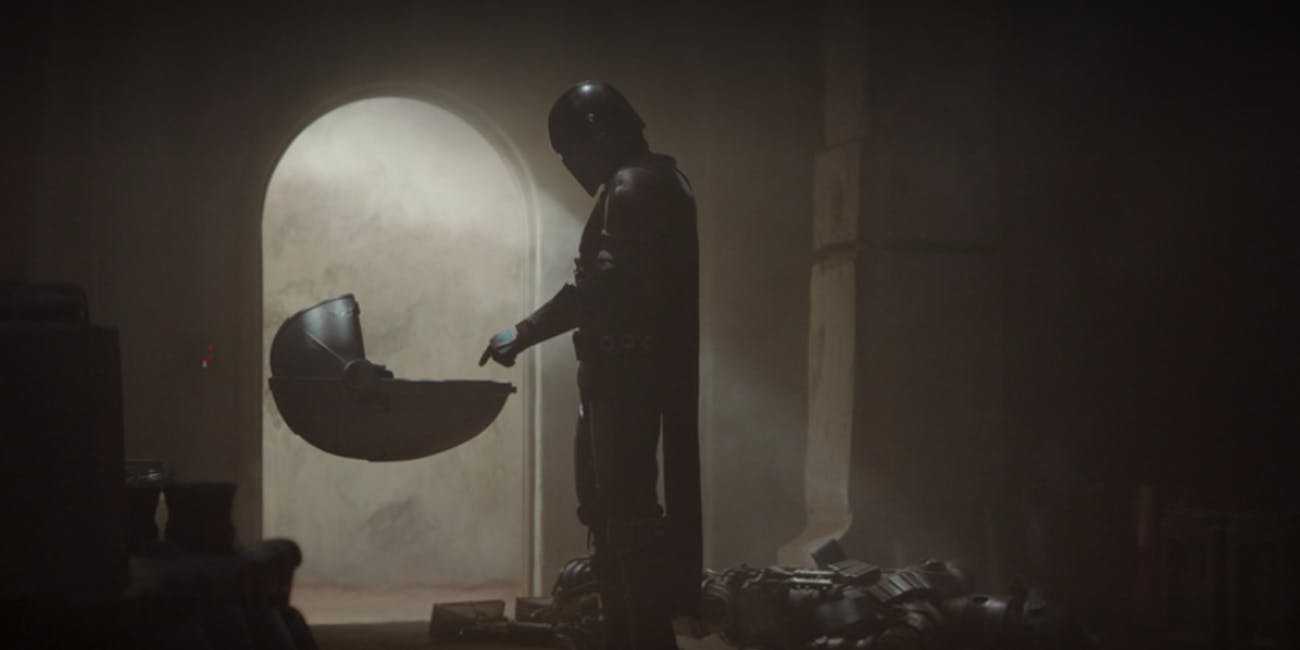 ‘The Mandalorian’ is Disney+‘s first offering in terms of ‘Star Wars‘ content, taking the globally loved franchise in an entirely new direction. Just so you know what you are stepping into, ‘The Mandalorian’ refers to the warrior race from the planet Mandalore. Feared characters within the ‘Star Wars’ universe, known for their ruthlessness, like Boba Fett and Jango are Mandalorians.

When we are initially introduced to the character, it seems as though the titular Mandalorian might be the same, but by the time the first episode is done, we are sure that he is not as unfeeling or cold. We always knew that this series would be like a Western, set in space. True to its style, the episode starts with our bounty hunter tailing a subject. Being the pilot episode, care is taken to establish shots, setting up characters and arcs for later episodes to explore. Thus, we see our Mandalorian enter a bar where two thugs challenge him. They receive the rough end of the deal, allowing the Mandalorian to give us a brief glimpse of his skills.

However, it turns out that he was actually tracking another alien that the thugs where roughly-handling. This alien seems to believe he can smooth talk his way out of the situation. Any attempts at nervous banter are met with cool indifference from the Mandalorian, but allows Jon Favreau the chance to show his comedic talent. Fans of the franchise will recognize the bounties frozen in carbonite. The look on the captive’s face is reminiscent of Han Solo’s, as he knows his fate is sealed. This one scene goes on to show that the Mandalorian means business and is the real deal.

Since his latest bounty does not pay too well, he seems to be looking for better contracts. We get to know that the Empire has fallen since the Mandalorian refuses the Imperial credits, even if it means getting paid less. Nonetheless, the new bounty takes him into even more dangerous territory, as he meets a shadowy individual known as The Client (played by legendary director Werner Herzog). The Client is guarded by Storm Troopers, indicating that he was an important part of the Empire. He tasks the Mandalorian with the mission to track down the target whose age and last known location is provided. Things get a little tense in the room, but the Mandalorian likes his odds and takes the contract.

We are also given a little backstory into the Mandalorian’s childhood. A Separatist attack on their home planet forces the assassin’s parents to hide him in safety. This is definitely an arc that will be further explored in future episodes, as we unravel more of the Mandalorian’s past to understand the character’s motives. However, the story expertly draws us out from the past to the present and dangerous mission that the Mandalorian has undertaken. He arrives at the place where the target is supposed to be, but it is heavily guarded. Luckily he is joined by a robot armed to the teeth. Yes, this is the IG-11 voiced by Taika Waititi. The two make a formidable duo and there is a thrilling gunfight sequence, which to me was very reminiscent of ‘Butch Cassidy and the Sundance Kid‘.

Finally, they overpower the guards and get to the target. Since the target is the biggest surprise, spoil it for you we shall not! The droid wants to eliminate the target but the Mandalorian terminates his newly formed partnership with the droid instead, choosing to protect the baby target.

The first episode does have some jagged edges which will hopefully be cleared up as more of the story unravels. As far as the plotlines are concerned, most of it is shrouded in mystery, but knowing Favreau’s style, he will not string viewers along pointlessly. Surely the seeds that are sown in the early episodes will bear fruit as the show moves towards a close.

Some words must be said for the wonderful work done in portraying the various alien races. Anyone who is a fan of the franchise will recognize some of the aliens shown, which makes the story extremely familiar, even though it takes place in the fringes of the galaxy where the Empire has no authority and lawlessness is the name of the day. ‘The Mandalorian’ feels like it organically exists within the ‘Star Wars’ universe, paying homage to the existing content but having a personality of its own.

The Western themes, costumes, and performances have come together well, and the first episode’s ending will definitely leave fans wanting more, looking forward to the second episode, slated to drop this Friday, November 15, 2019. Pedro Pascal finally seems to have realized the error of his ways in not wearing a helmet (remember his fight with the Mountain in ‘Game of Thrones‘?) and refuses to take it off in the first episode of ‘The Mandalorian’. Overall, the episode centers around him, as he pulls together various narrative points., making grand entries, and looking cool at all times.

Considering the strong start, one might be inclined to agree that we might witness the considerable future of the ‘Star Wars’ franchise playing out on Disney+, instead of theaters, and we are not complaining.