The Nice Guys Ending, Explained: Why Are They Looking for Amelia? 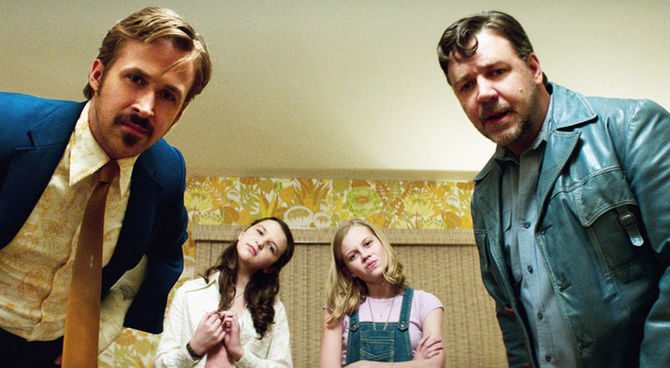 Set in the 1970s, in Los Angeles, ‘The Nice Guys’ follows an oddly funny pair of detectives who investigate the missing case of a girl named Amelia, whose absence is somehow connected to the murder of a famous Porn star Misty Mountains. It stars Ryan Gosling as a licensed private investigator, Holland March, and Russell Crowe as Jackson Healy, an aspiring private investigator who, for the time being, takes money to beat up bad guys, especially those who target young girls. The story starts with the two teaming up to track down Amelia and ends with a murder conspiracy that involves the government.

With the occurrence of multiple murders and multiple life-threatening attacks, the missing case quickly escalates into the most important cases of their lives. Although with the help of Holland March’s little daughter, Holly, played by Angourie Rice, they do find Amelia, and soon lose her. Let’s find out what happened to her and who is behind all the murders. SPOILERS AHEAD!

This crime-action movie takes you on a journey of finding Amelia and solving the mysterious murders that are connected to her. ‘The Nice Guys’ opens with the death of an adult film star Misty Mountains, as her car rolls down the hill and crashes through a house into the ditch. Before she dies, her last words are, “How do ya like my car, big boy?”

Jackson Healy is contacted by Amelia to stop Holland March from following her, and Holland March is contacted by an old lady for a case that leads him to look for Amelia. Their first encounter ends up with March being beaten up and breaking his arm. But Healy goes back to March after two thugs broke into his home to interrogate him about Amelia and decides to work with him to find her. As they further investigate the case, they find out that Amelia made an ‘experimental (adult) film’ ‘How do you like my car, big boy?’ with her boyfriend Dean, starring Misty Mountain and financed by producer Sid Shattuck. Unfortunately, all three of them- Misty, Dean and Sid are dead and only Amelia knows what happened to them and why. Later they discover that Amelia’s mom Judith Kuttner was also involved in Amelia’s missing and the murders.

Judith Kuttner, a high-ranking official at the U.S. Justice Department, was illegally helping the Auto Industry in Detroit to prevent new technology from entering the industry. And Amelia, after finding out about this, captured all the details of the conspiracy in their ‘experimental film’ and planned to use it to reveal the truth to the public. Towards the end of the film, a copy of the ‘experimental film’ is finally located and after many risks and chase sequences, Healy and March successfully get their hands on it before Judith does.

The Nice Guys Ending: Why Are They Looking for Amelia?

Amelia, the daughter of Judith Kuttner, a senior official at the U.S. Department of Justice, was running from her mom as she found out about her involvement in illegal work. Judith was illegally helping the big Automotive companies avoid buying catalytic converters for their exhaust emission device that would help reduce air pollution, as she wanted to save the manufacturing cost. Amelia collected all the information about the illegal work and planned to expose her mom as well as the big companies involved through an ‘experimental (adult) film’ that included all details and proofs. Along with her boyfriend Dean, they “made a porno where the plot is the point” to expose Judith and the automotive companies.

To get rid of the thugs sent by her mom, Amelia hired Jackson Healy and gave him whatever information she had regarding the people that followed her. This note included March’s address too. On the other hand, PI Holland March takes up a case to find the old lady’s missing niece- Misty Mountain, who she thinks is alive as she saw her in the house across the street two days after her death. This case leads March to Amelia, as he finds out that the old aunt mistook Amelia for Misty. After Healy tracks down March to stop him from following Amelia, he later realizes that March is not the bad guy. He wasn’t following Amelia, he was looking for her to find Misty for the old aunt.

So together they attend a party in Sid Shattuck’s house where she was supposed to be, only to find Sid Shattuck, the big producer of porno films, dead. But March’s daughter Holly manages to find Amelia, and as the thugs arrive and almost shoot Amelia, she escapes again. After this incident, Judith calls Healy and March to her office and asks them to find her daughter for her. Unaware of Judith’s true intentions, they agree to do so. With the help of a note that Healy picked up from Sid’s room, both investigators figure out Amelia’s location and, by a stroke of luck, find her. They take her to March’s house, where Amelia reveals the truth about Judith’s intentions and involvement in helping the Automotive companies. She also tells them about the ‘experimental (adult) film’ that they made to uncover the truth. But they don’t completely believe what she said.

What Happens to Amelia? Who is The Main Villian?

As the plot unveils, the duo finds out that Judith wasn’t protecting Amelia but was, in fact, the one behind all the murders. When Judith found out about the film, she got Dean killed, making it look like an unfortunate fire incident, and then also got Misty, the star of the film, killed. Later she sent thugs to get Sid Shattuck killed at his own party. Judith also had her assistant Tally fool Healy and March into getting out of the house so that the newly hired hitman, John Boy, could get into their house and kill Amelia. As soon as the hitman reaches March’s house and starts shooting, Amelia takes the chance to escape from the window but unluckily bumps into John Boy’s car when he was driving away and gets shot dead.

After Amelia’s death, Healy and March connect all the missing pieces of the case and figure out her entire plan. They discover that Amelia, along with her projectionist friend Chet, had a copy of the ‘experimental film,’ which they played on the wall using a projection in the house right across the old aunt’s home. This footage is what the poor aunt saw from across her window and saw the footage of Misty. They discover that Amelia and Chet planned to play the film at the LA Auto Show and expose the truth to the world. Though Judith tries to stop the film from being broadcasted at the event, it still gets projected for everyone to see. With gunshots blazing and a chaotic chase scene, Healy and March successfully get their hands on the film.

Towards the end, Judith is arrested, but the auto companies do not get charged due to a lack of evidence. Holland March and Jackson Healy decide to work as a team and form a new detective company- ‘The Nice Guys.’

Why is the Movie Titled The Nice Guys?

Co-writers Shane Black and Anthony Bagarozzi, in conversation with GQ, mentioned that ‘The Nice Guys’ came about because of their love for detective stories. In another exclusive interview with Variety, Bagarozzi talked about fooling the audience with an ironic title, as he said, “You know they’re two not-very-nice-guys. One breaks arms for a living and the other cons old ladies out of money. It was literally the worst people that we could think of and then trying to make that fun.” Even though the tagline of the movie clearly says, “They’re not that nice,” Healy and Marchy succeed at finding the ‘experimental film’ and keeping it away from Judith, which, even though didn’t win them the case but did do some good by exposing the ‘bad guys’ to the world.

As Healy has a change of heart and fights his force of habit by deciding not to kill John Boy, and as March finally keeps his promise to his daughter, both their moral campuses slightly shift. At the end of the movie, the title ‘The Nice Guys’ does fit private investigators Healy and March well.

From a missing case to a murder case, to the involvement of the Justice System in illegal work, to environmental issues, as the plot of the movie thickens, ‘the plot is the point’ of ‘The Nice Guys.’

Read More: Is The Nice Guys Based on a True Story?