The Real L Word: Where is the Cast Now?

Created by Ilene Chaikin, Showtime’s ‘The Real L Word’ is a reality series that premiered in June 2010. Initially set in the stunning city of Los Angeles, California, the show is inspired by the popular drama series ‘The L Word.’ The Showtime project follows a group of lesbians going about their everyday lives. The cast members’ journey is full of daily struggles but also provides the audience a glimpse into their experiences as part of the LGBTQ+ community.

After the first two seasons, the show’s third installment was set in Brooklyn, New York. In September 2012, the series completed its run and became a favorite for many. Over a decade since the show last aired, fans are eager to know what their favorites from the show are up to. Luckily, we are here to explore the same!

Where is Whitney Mixter Now?

As of writing, Whitney Mixter is based in Los Angeles and happily dating Nina Græ. The duo completed the first year of their relationship in November 2022 and were over the moon about it. Whitney is a happy mother to Mecca Silas Moon Mixter, born in October 2020; the process was possible thanks to the efforts made by Seattle Sperm Bank and Kindbody. Interestingly, the bouncing baby boy has his own Instagram page operated by his mother and godmother, Sterling  Victorian.

Presently, Whitney is a Freelance Event Producer, though she also serves as a Creator for Krave Spring Break LLC. Additionally, she is affiliated with ZOPA Realty Group as a Dream Home and Property Facilitator. The reality TV star has an impressive social media following which she uses to promote different brands and their products. She has additionally appeared in various television shows over the years.

Where is Kelsey Grace Chavarria Now?

Next on the list, we have Kelsey Grace Chavarria, a talented filmmaker who now lives in Long Beach, California. She turned 35 in November 2022 and is in a relationship with Lauren Atchison. As for her professional life, the Showtime star presently serves as an Office Manager for Prometheus Entertainment. The organization is located in West Hollywood, California, and suits Kelsey perfectly.

Where is Kacy Boccumini Now?

For Kacy Boccumini, the past few years have been quite noteworthy. According to the reality TV star, the Covid-19 lockdown in 2020 provided a perfect opportunity to introspect and experiment. On Valentine’s Day 2021, Kacy could fully resolve to himself that he was a man and should stop hiding his true self from himself and the world. This kickstarted his transition period, though the 2013 Multiple Sclerosis (MS) diagnosis did seem to pose a problem. Fortunately, he could soon start the hormone replacement therapy that would not increase his concerns about MS.

From what Kacy has shared, his loved ones have fully supported the process and had his back. In May 2021, the ‘The Real L Word’ star shared the news of his transition with the world and received much love for the same. Currently, he serves as the Executive Director of Distribution Workflow for Sony Pictures Entertainment. He has been part of the company’s Culver City, California, branch since July 2007, though he started as a Manager for Worldwide Marketing Production. Additionally, he is affiliated with My Best Guy Productions as a freelance Actor, Writer, and Director. Not just that, he is the host of the podcast “The Stories We Tell.”

Where is Alyssa Morgan Now?

Alyssa Morgan was one of the fan favorites among the cast members of the Showtime series. She is now a proud Makeup Artist and lives in Los Angeles, California. The reality TV star is a dog lover and has a canine pet named Birdie, whom she adores very much. Moreover, she seems to have an interest in writing and magic.

Fans will be glad to know that Alyssa is in a happy relationship with Michael Mahon, a tattoo artist. The couple has been together for over five years and got engaged in January 2022. As one can guess, they are eager to start a new chapter of their lives. Besides, Alyssa is still in touch with her fellow cast members and seems close to Whitney Mixter.

Where is Cori McGinn Now?

Next, we have Cori McGinn, whose relationship with Kacy Boccumini was one of the show’s highlights. Sadly, the two broke up sometime in 2017 after 11 years of togetherness. Though the news saddened their fans, they did gain much support from their admirers as they tried to adjust to their new norms. The two seem to be on reasonably amicable terms and often post on each other’s social media posts.

Since their split, Cori seems to have dated a few more people, though the current status of her relationship is not entirely certain. We know that the reality TV star lives to the fullest and loves her adorable dog very much. Additionally, she works as a Senior Manager for Localization within Warner Bros. Entertainment and lives in Los Angeles.

Where is Romi Klinger Now? 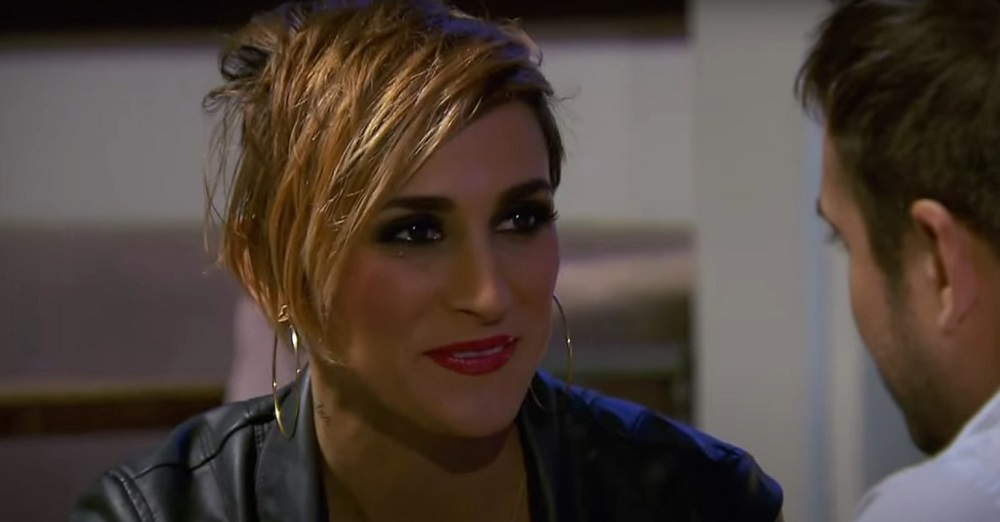 Since her time in ‘The Real L Word,’ Romi Klinger seems to prefer a private life. The reality TV star did appear in an episode of Bravo’s ‘Shahs of Sunset‘ in 2014. It seems that she is still affiliated with Casa Por Vida as a Designer and calls the City of Angels her home. On January 8, 2023, Romi will seemingly celebrate her 41st birthday, and we wish her the best!

Where is Nikki Weiss Now?

We are delighted to share that Nikki Weiss(AKA Nikki Weiss-Goldstein) is still happily married to her wife, Jill Goldstein. The couple celebrated their 12th wedding anniversary in October 2022. The pair has two adorable sons, Adler and Grey, whom they never hesitate to shower with love and affection. For the duo, marriage equality and breast cancer are two issues they are very passionate about. The latter is, in fact, something that Nikki had to go through herself shortly after the Showtime series stopped airing.

In January 2013, Nikki suspected that her left breast may have cancerous lumps and went to the doctor to get answers. She was diagnosed with Bilateral Breast Cancer, AKA Bilateral Breast Carcinoma. After treatment, double mastectomy, and reconstruction, the reality TV star is cancer-free and eager to spread as much awareness about the issue as possible. Since 1994, Nikki has been the mind behind Nikki Weiss & Co, an organization that represents filmmakers and other behind-the-camera artists.

Where is Jill Goldstein Now?

Being happily married to Nikki Weiss seems to suit Jill Goldstein just fine. The reality TV couple not only completed 12 years of marriage recently but also celebrated the 10th birthday of their son Adler in October 2022. Meanwhile, their younger son, Grey, turned 7 in November 2022, much to the delight of the Weiss-Goldstein family. Around the same time that her wife was diagnosed with cancer, Jill lost her father to prostate cancer after he battled it for about 17 years. Since then, the family has grown and celebrates life to the fullest. Jill is affiliated with Nikki Weiss & Co as a Writer/Producer.

Where is Tracy Ryerson Now?

Based in Los Angeles, Tracy Ryerson presently works as Senior Vice-President of Development and Production for Wayfarer Studios. She has been a part of the organization since November 2020 and seems to enjoy her work. Tracy’s admirers will be delighted to learn that she is still happily in a relationship with Stamie Karakasidis. The couple has four children, Jagger, Nikos, Dautry, and Milo. Born in 2018, Milo is the youngest of the bunch and is raised by his two mothers, who love him very much. The family also has two adorable dogs named Izzy and Maxi.

As it turns out, Stamie Karakasidis is thriving in her personal and professional life. The reality TV star has been active in the real estate industry for over 20 years and works as an agent for Rodeo Realty. Additionally, she is the co-founder of Mewd Vitamins, an organization that provides vegan vitamin gummies for teenagers. She and her dear friend Mike established the company.

Additionally, Stamie has joined forces with partner Tracy Ryerson to host the “Stamie+Tracy” podcast. She seems active as a stand-up comedian and never misses the chance to make people laugh using her sense of humor. As a mother of three teenagers (Jagger, Nikos, and Dautry) and a toddler named Milo, Stamie is quite thankful for her family.

Where is Lauren Russell Now? 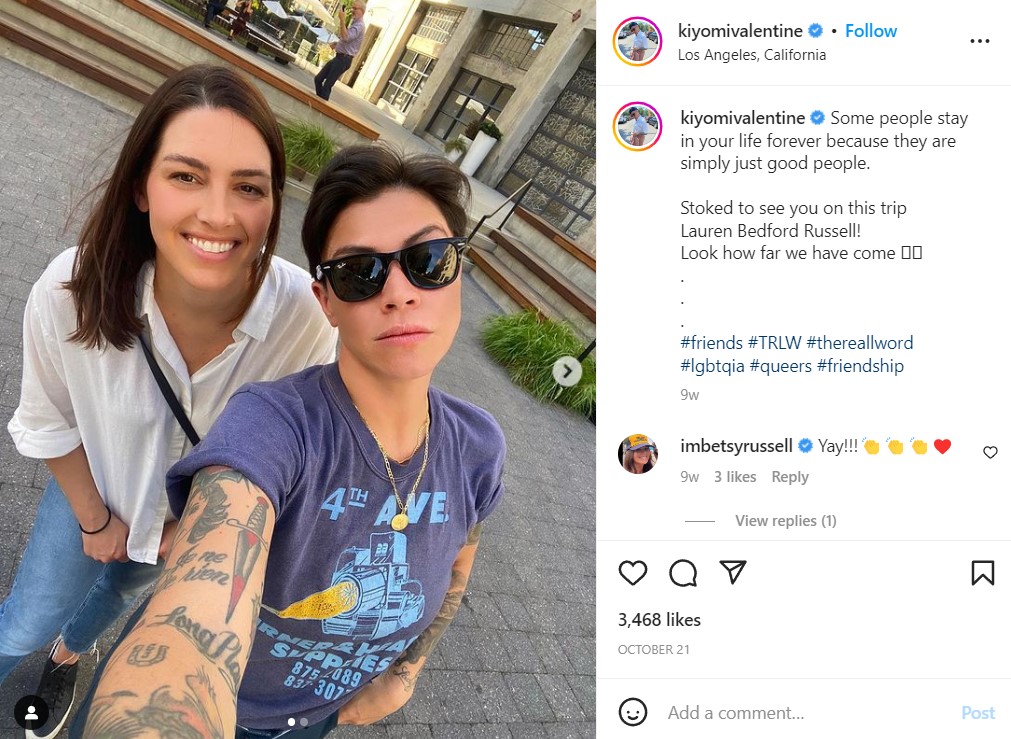 Lauren Russell has been active in numerous fields as a woman of many skills. Her time as a jewelry designer started a year before she moved to the City of Angels from New York. Before the move, Lauren was a part of Ivanka Trump Fine Jewelry. Presently, she sells most of her products through her own brand, Lauren Russell Jewelry by Design. The company even has a website that one can use to buy products crafted by Lauren. The reality TV star is a proud owner of two adorable dogs named Samson and Delila, who turned 7 in June 2022.

Where is Sada Bettencourt Now?

Known for her romance with Whitney Mixter during ‘The Real L Word,’ Sada Bettencourt (AKA Sara Simone) also seems to have found love in her life. She and Whitney did go to VH1’s ‘Couples Therapy’ in 2014 though it did not seem to help. As of writing, Sada is in a happy relationship with Troy Spino.

The couple has a son named Quinn Vieira Spino, born on January 21, 2019. Moreover, Sada is presently pregnant, and the family is excited to welcome their baby girl into their lives. She is affiliated with HairBae Beauty Bar as a Fitness/Stylist and seems quite passionate about fitness.

Where is Kiyomi McCloskey Now? 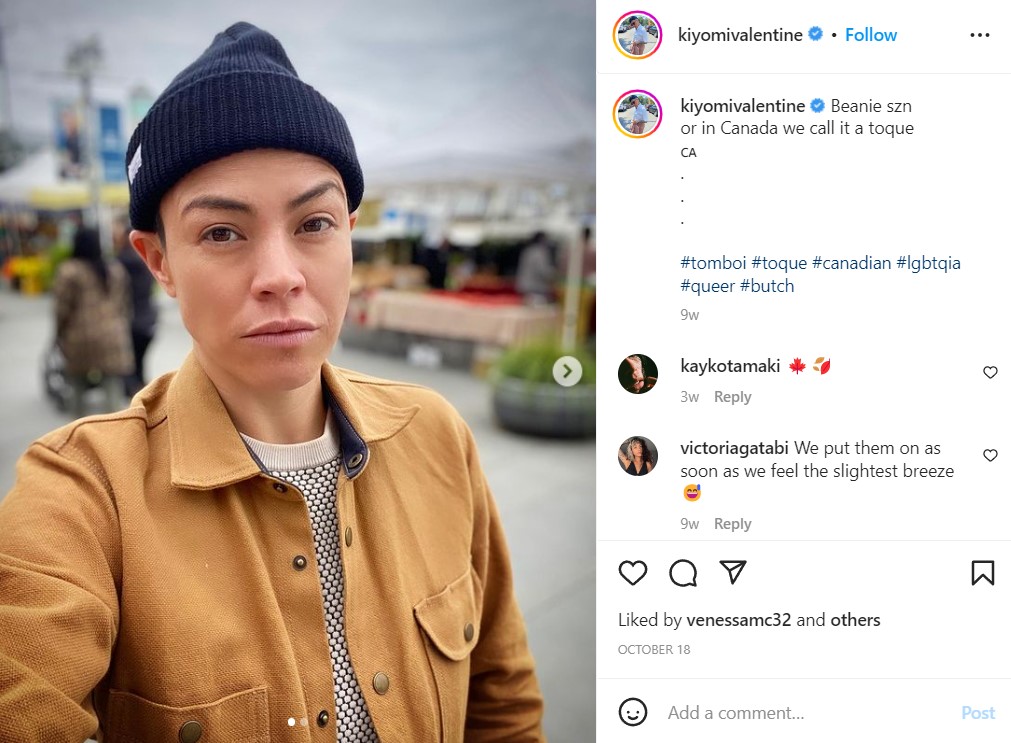 As a part of the last season of ‘The Real L Word,’ Kiyomi McCloskey earned a large fan following. Currently, she seems to be enjoying life to the fullest and in the company of her loved ones. In affiliation with KWNYC Tribeca, Kiyomis is a Licensed Real Estate Salesperson who works within the Greater New York City Area of New York. Her fans will be delighted to know that she has not left her musical passion behind and is a Singer and Songwriter for Hunter Valentine Music. The reality TV star is in touch with fellow cast members like Lauren Russell.

Where is Amanda Leigh Dunn Now?

Amanda Leigh Dunn appeared in the third iteration of the Showtime series and captivated the viewers with her looks and personality. Presently, she serves as the Head of Design and Development for House of Rolison, a real estate development organization. The reality TV star often uses her social media accounts to discuss various social issues and is especially vocal about matters related to the LGBTQ+ community.

Where is Somer Bingham Now?

Based in Brooklyn, Somer Bingham has continued her musical journey. She is affiliated with MNR PLSR|Clinical Trials as a Musician, Performer, Producer, and Recording Engineer. Besides, she happily showcases her musical talent as a Producer, Songwriter, and Composer through her brand, which is named after her. Most of what Somer knows is self-taught, and she is always eager to leave an impact on others. On the personal front, she is a proud mother to her daughter, who can often be seen on the reality TV star’s social media. Not just that, the happy duo has a dog whom they love very much.