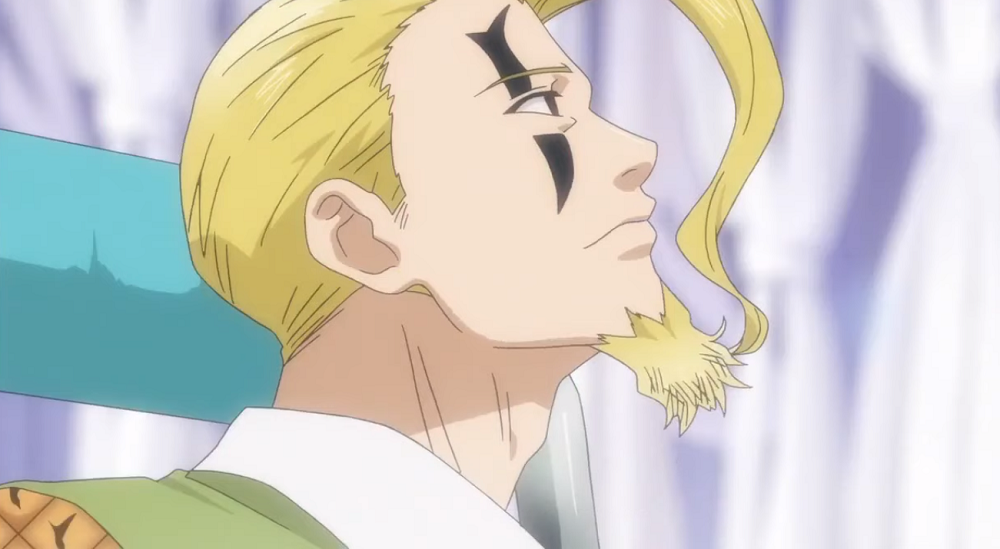 After all the rage that followed the first few episodes of Season 4, fans are now finally starting to adapt to the new animation style and also, to the extreme censorship that makes all the battle scenes look lousy. The white blood and black patchy censorship is something that I’ll be ignoring in most of my reviews because from the looks of it, it will be pertinent in the entire season. That being said, just because it’s not as gory as it used to be, it does not necessarily mean that it’s an entire lackluster of a season. So far, Season 5 has been a slow burn but quite subtly, it has been driving its storyline into a very interesting arc that plunges deep into the origins of the holy war and also the ten commandments.

In my previous review, I had expressed how this season has already bolstered us with several unanswered questions that it will probably solve in the near future. But with Episode 5, it just makes things more complicated and further thickens the plot by introducing new characters and also, as always, riddling us with the diminishing lines between good and evil.

In the previous episode, when the ten commandments transformed themselves into Indura by sacrificing six hearts, it was certain that Ludociel would now be dead. But that’s when Elizabeth stepped on the battlefield and decided to take things in her hand. Unsurprisingly, it turns out that Elizabeth only wants to help the ten commandments and does not want to kill them. She uses her light to destroy the darkness of their Indura state while Ludociel tries to convince her that they deserve to die. That’s when Meliodas enters the scene and protects Elizabeth from Ludociel.

The other two fallen Archangels—who were previously burned by the Indra—show up. But instead of supporting Ludociel, they join Elizabeth and help her get rid of the darkness that has consumed the commandments. After a while, they are finally able to destroy the curse that had taken over Sir Monspeet and Lady Derieri and with this, the two of them fall to the ground as the entire forest around them is consumed in black smoke. Exhausted from all the energy she put in, Elizabeth also collapses in Meliodas’s arms.

In the meantime, Melascula, who was previously brainwashed, finally realizes what’s going on and she calls for all the fairies and giants to get the two commandments who have fallen. Somewhere in the depths of the forest, King and Diane run into Gowther who seems to be very different from the Gowther they used to know. Parallelly, Melascula ends up opening the doors of a new evil world only to realize that she has set the real Gowther free.  This is when the real Gother explains that he was kept locked inside the evil prison for years and the only way he was able to connect with the real world was through his doll. So the Gowther that Diane and King run into is nothing but a mere doll. With this, the episode finally comes to an end.

Episode 5, in terms of its storyline, is nothing like its predecessors. While it still pursues the seemingly interesting arc of the previous ones, instead of resolving its formerly introduced mysteries, it plummets into a whole new direction of the story. The introduction of the new antagonist, Gowther, not only raises a lot of questions in context with its plot but also makes you wonder how Diane and King’s test in the past will come in tandem with it. Now again, since I haven’t read the manga, I have no clue what all of this is leading to. But as of now, I would like to believe that the anime will eventually be able to make sense out of all of these plot points by drawing consequential links between them.

The episode again makes you empathize with the commandments and also shows how freakishly strong Elizabeth used to be back in the day. Even Ludociel’s past is slightly touched upon and we get to know more about the origins of his sinister intentions of destroying the demon clan. Surprisingly, the humans, who seemed to be the enemies of the ten commandments, end up changing sides and start attracting the giants and angels instead. And finally, the highlight of this episode is Gowther’s reveal and hopefully, in the next few episodes, we’ll also get to know more about his intentions and also, the significance of his doll.

All in all, ‘The Seven Deadly Sins’ Season 4 has experienced a major drop in its ratings compared to its forerunner and it’s pretty obvious why. Studio Deen’s involvement with the series has not really worked in its favor so far but its intricate and riveting storyline is certainly making up for the damage. Hopefully, if not better, this season will atleast retain its current quality in the episodes that follow.