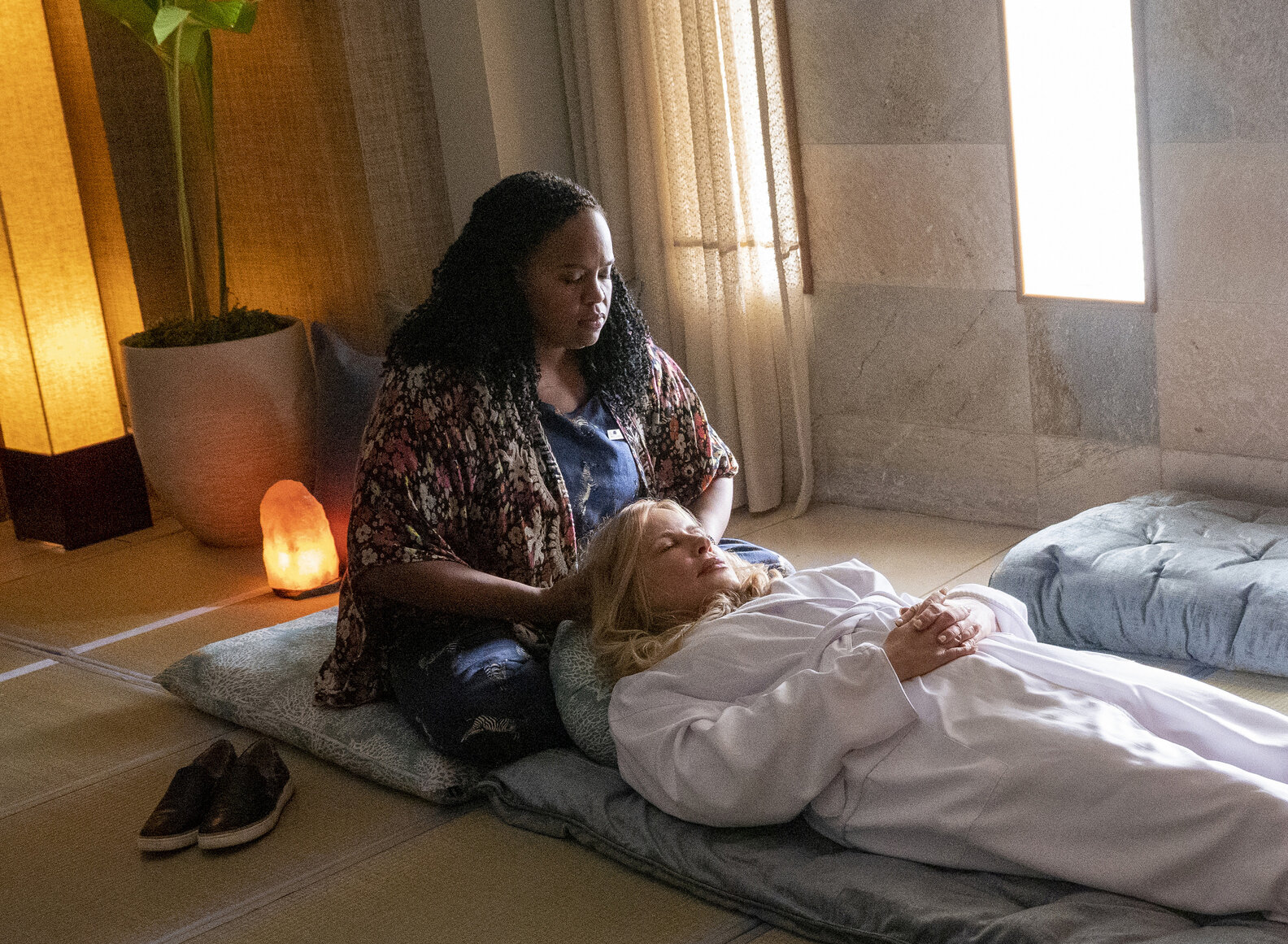 The satirical comedy ‘The White Lotus’ revolves around a group of wealthy people who have come to spend a week at the eponymous hotel in Hawaii. The show’s cast of characters also includes several members of the hotel staff. In episode 4, titled ‘Recentering,’ the feud between Armond (Murray Bartlett) and Shane (Jake Lacy) takes another new turn as the latter begins demanding the phone number of Armond’s boss, the general manager of the hotel. Rachel’s (Alexandra Daddario) struggle with her insecurities and doubts about her marriage intensify with the sudden arrival of her mother-in-law, Kitty (Molly Shannon).

Tanya (Jennifer Coolidge) reiterates that if Belinda (Natasha Rothwell) opens a spa of her own, she will fund it. Meanwhile, Paula (Brittany O’Grady) and Olivia (Sydney Sweeney) finally get back the green bag but discover that Armond has taken most of the drugs from it. Here is everything you need to know about the ending of ‘The White Lotus’ episode 4. SPOILERS ALERT.

Paula spends some candid moments with Kai (Kekoa Kekumano), the hotel employee she has been seeing, and learns that the property where the hotel stands now originally belonged to his family and was taken by the government. Before he found Paula and Olivia’s bag, Armond had been sober for 5 years. The stress of his job, combined with his feud with Shane, prompted him to jump off the wagon. After a wild night, he wakes up with regret and shame.

He later speaks to Belinda, who suggests that he should get rid of the pills. Tanya tells Olivia and Paula that she found their bag and handed it over to one of the hotel employees. The girls confront Armond, who promises them that he will give them the bag back. He later does, but after removing every other drug except for marijuana. He knows that the girls can’t do anything about it because they will have to reveal that they have brought drugs with them.

Tanya cancels her plans with Belinda after she meets a new guest, Greg (Jon Gries). When he says that he is affiliated with BLM, she erroneously assumes that he is speaking about the Black Lives Matter movement. It is during the dinner that she learns that he meant the Bureau of Land Management. Mark (Steve Zahn) tells Quinn (Fred Hechinger) that he cheated on Nicole (Connie Britton). Quinn brings it up during the dinner by alluding to a $75,000 bracelet that Mark bought for his wife afterward.

The White Lotus Episode 4 Ending: Why Does Paula Leave the Dinner Table?

This episode focuses more on race privilege than classism. Nicole declares without a hint of irony that the straight white men are suffering the most in today’s world while criticizing Paula and Olivia’s behavior toward Quinn. When Mark agrees with his wife during the dinner, Olivia reminds him that not everything is about him. Mark counters by saying that he doesn’t even want to be the center of the narrative and proposes that they should focus on Paula. But when his daughter and Paula demonstrate to him that he doesn’t know much about Paula, he becomes defensive and shifts the focus back to himself.

Paula is increasingly becoming disillusioned with the Mossbacher family. She watches Kai performing in front of a largely white audience and remembers what he said earlier. She realizes that she can’t stay there any longer and watch a boy that she evidently cares about do something that he most likely finds humiliating. She leaves and goes back to the room. Later that night, Olivia apologizes to Paula for her family’s behavior and claims that she is not like them. This is right after she approached Kai and flirted with him.

Why Does Shane Start to Laugh at the End of the Episode?

Shane knows that when Armond put him and Rachel on the chartered boat, he was fully aware that Tanya would also be there. When he sees Armond the next time, Shane asks the latter to give him the hotel’s general manager’s contact information. Armond gives him the wrong number, further infuriating him. When Kitty arrives, it becomes apparent to the audience from where Shane has inherited many of his insufferable traits.

Shane goes to the reception to find Belinda there and convinces her to take him to Armond’s office. When Belinda opens the door, she and Shane discover Armond is having sex with Dillon (Lukas Gage), one of the hotel employees. They also notice that there are several pill bottles on Armond’s desk. Shane begins laughing as he realizes that he can now ruin his enemy and end the feud decisively.