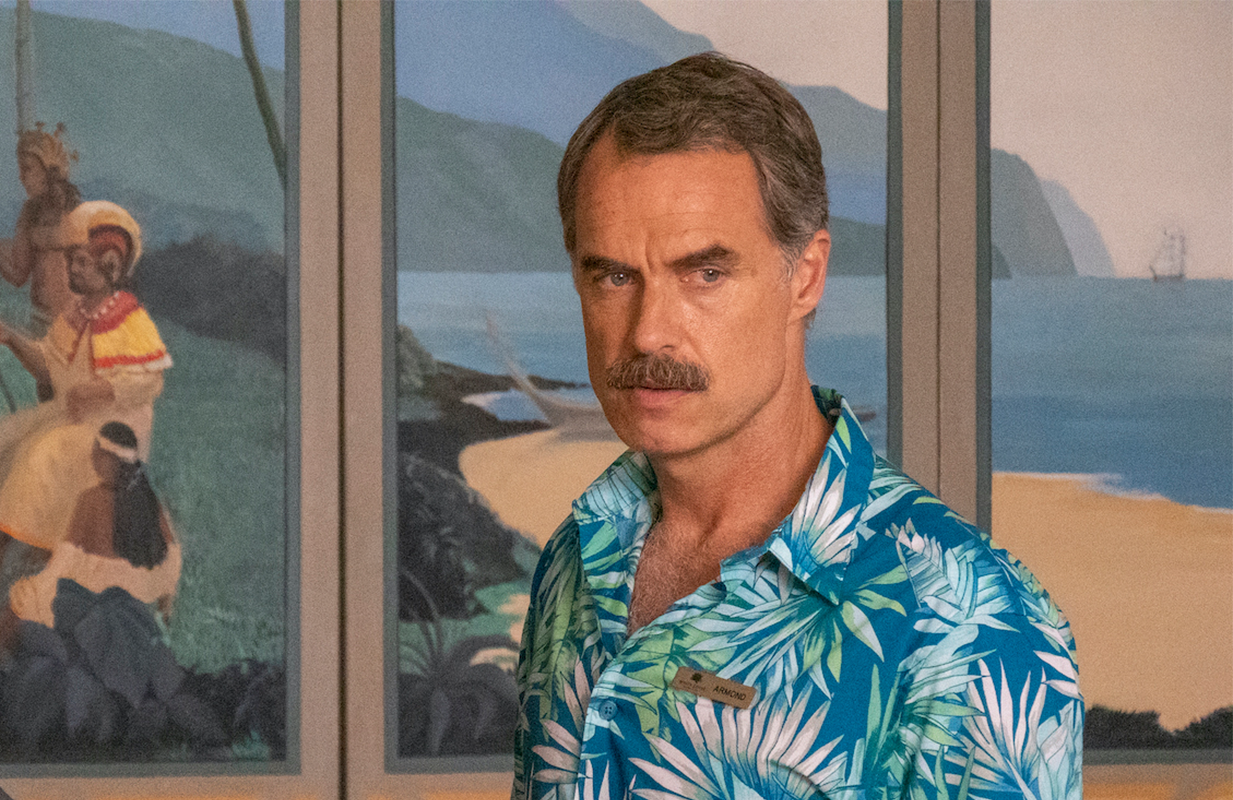 Mike White’s (‘Enlightened’) ‘The White Lotus’ is an unrelenting and vicious satire on wealth, classism, and human behavior. The story revolves around a group of vacationers and staffers that attend them at the eponymous hotel in Hawaii. Each episode offers a riveting exposure about how the characters’ personal hypocrisies guide each of them. Here is everything you need to know about the ending of ‘The White Lotus’ season 1. SPOILERS AHEAD.

‘The White Lotus’ season 1 finale, titled ‘Departures,’ depicts the vacationers returning to the world they came from. Rachel (Alexandra Daddario) tells Shane (Jake Lacy) that she has made a big mistake marrying him. Since Mark’s (Steve Zahn) apparent heroic deeds on the previous day, his relationship with Nicole (Connie Britton) has drastically improved. Quinn unsuccessfully tries to convince his parents to let him stay in Hawaii.

Meanwhile, Shane finally gets the higher management of the hotel to fire Armond (Murray Bartlett), who spends his last evening as the manager of the White Lotus drinking, taking drugs, and having sex. Meanwhile, Tanya (Jennifer Coolidge) learns certain truths about Greg and still decides to continue their relationship. Meanwhile, Belinda realizes exactly what kind of woman Tanya is.

The White Lotus Season 1 Ending: Is Armond Dead? Whose Body Is in the Coffin?

Yes, Armond is dead by the time season 1 ends. The coffin that makes its first appearance in the pilot carries his body. After learning that Shane has complained to the general manager about him, Armond also discovers that the hotel has decided to terminate his contract. He has spent the best years of his life working at the hotel and has very little to show for it. He has strived to fulfill every whim and desire of the guests, putting their happiness before everything else.

However, Shane seems to bring out the worst in Armond. When he thinks that Shane and Rachel are away, Armond gets into their room and defecates inside Shane’s luggage. When Shane discovers what has happened, he contacts the hotel staff. However, he soon realizes that someone else is in the room. He has heard about the burglary in Mossbacher’s room. So, he arms himself with a kitchen knife. As he tries to find the intruder, he suddenly comes face to face with Armond and ends up stabbing him. Although Armond dies, no charges are brought against Shane, as the act is likely viewed as self-defense.

Does Tanya Invest in Belinda’s Spa?

No, Tanya doesn’t invest in Belinda’s spa. Before she leaves with Greg, she visits Belinda one last time and thanks the latter for everything she has done for her. Tanya herself brings up the business proposal and basically admits that she has latched onto the other woman as she needed a source of comfort at the time. She then used her money as an incentive to keep Belinda’s attention. It is heavily implied through what she says that this is not the first time she has done this.

Now that she has Greg, a man for whom her money is likely the least interesting thing about her, she has decided to cut her ties with Belinda. Perhaps, she never had any intention to invest in Belinda’s business, and it was all an act to get what she needed from the other woman. Before she leaves, Tanya gives Belinda an envelope full of money. This is most likely her way of concluding a relationship that she thinks is transactional. Belinda has little choice but to accept it, as she knows that the money will significantly help her and her family

Why Does Quinn Decide to Stay Back in Hawaii?

Quinn (Fred Hechinger) has led the first 16 years of his life in a certain way. He is extremely introverted and rarely looks up from all those digital devices he carries around. Spending time at the White Lotus changes him and makes him more appreciative of the world around him. After his sister forces him to spend the night on the beach, so she and Paula can have the living room all to themselves, Quinn starts to undergo a radical transformation. He meets a group of local canoers and later joins them.

The first time Quinn tells his parents that he wants to stay in Hawaii, they can’t tell whether he is serious or not. When he asserts that he is, Mark and Nicole refuse to let their 16-year-old son stay alone in Hawaii. Although Quinn doesn’t say anything more at the time, he doesn’t accept his parents’ decision. On the day of their departure, he comes along to the airport with his family and assures his father that he is right behind him. The moment Mark leaves for boarding the plane. Quinn runs away, knowing that his parents can’t come after him for now. In one of the final scenes of season 1, he is seen canoeing with his teammates. They have plans to travel around Polynesia in the spring. For the first time, Quinn has a purpose in his life.

Does Tanya Immerse Her Mother’s Ashes into the Ocean?

Yes, Tanya immerses her mother’s ashes into the ocean. She comes to Hawaii with that particular objective in mind but isn’t ready until the day that she has to go back. At one point during the trip, she even hires a boat to take her to the middle of the ocean so she can scatter the ashes, but she loses courage and returns to the hotel. Tanya’s relationship with her mother wasn’t particularly healthy. By finally immersing the ashes, she gets the chance to move forward with her life.

Tanya discovers that Greg has a terminal illness. But as he decided to look past various facets of her neurosis, she decides to do the same with his illness. As she tells him, death is the last immersive experience that she hasn’t tried. She is quite aware of where her whirlwind, sex-filled romance is taking her but earnestly believes it’s better than where she was before.

Is Paula Arrested for Helping Kai?

No, Paula (Brittany O’Grady) isn’t arrested for helping Kai (Kekoa Kekumano). But as Armond informs the Mossbacher family, Kai gets arrested, and the jewelry pieces are retrieved. As the Mossbacher family heads back, the audience can see that Nicole is wearing some of those pieces. Olivia (Sydney Sweeney) realizes that Paula and Kai are behind the burglary and confronts her friend about it. Although Paula initially feigns ignorance, she ultimately has no choice but to acknowledge the truth.

Paula accuses Olivia of using their friendship as a prop for “weird” credibility. While this is not entirely incorrect, Paula fails to realize that the same thing can be said about how she treated Kai. He didn’t want to steal, but Paula convinced him to do it, using him as a tool in her make-belief fight against the wealthy. Because she is Olivia’s friend, the latter doesn’t tell her parents about her (Paula’s) involvement in the burglary. Kai is not so lucky and ends up becoming the true victim of the entire incident.