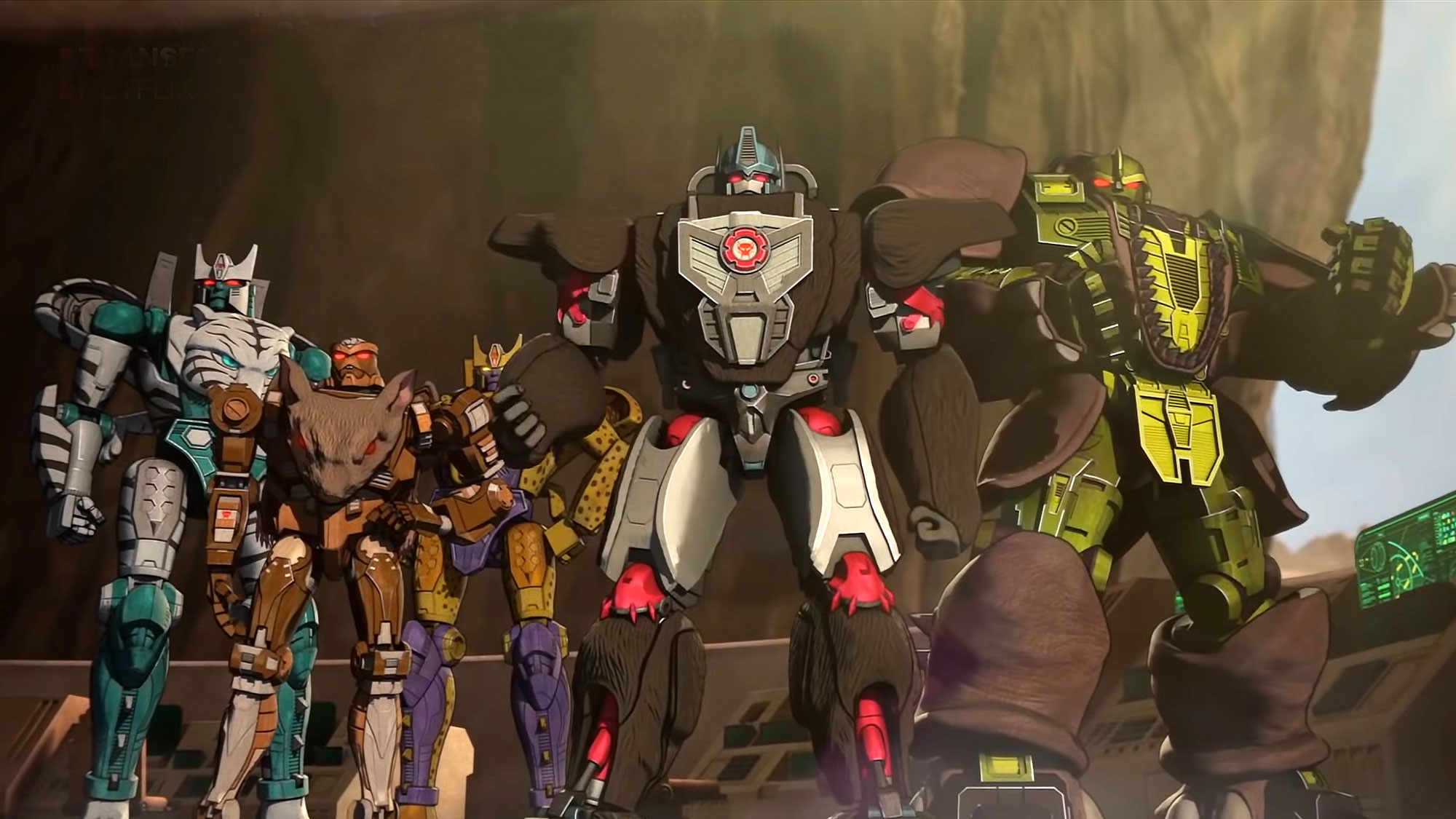 ‘Kingdom’ is the third and final entry in the ‘Transformers: War for Cybertron’ trilogy. The first chapter, ‘Siege,’ revolves around the brutal civil war between the Autobots and Decepticons in the Transformers homeworld Cybertron. Chapter 2, ‘Earthrise,’ follows the two warring groups as they travel across time and space searching for the AllSpark, the artifact that gives life to all Transformers. Their search ultimately brings them to Earth.

In ‘Kingdom,’ the two factions team up with the respective descendants to defeat the other group and take the AllSpark back to Cybertron before it’s too late. Unbeknownst to most of them, greater threats lurk beyond the horizon. Here is what you need to know about the ending of ‘Transformers: War for Cybertron Kingdom.’ SPOILERS AHEAD.

‘Kingdom’ introduces characters from the ‘Beast Wars’ continuity into the world of ‘War for Cybertron.’ The Autobots and Decepticons land on different locations on Earth. The Autobots meet the Maximals, while the Decepticons meet the Predacons, their respective descendants. It is revealed that both groups came from a future where the AllSpark never returned to Cybertron, which gradually died. Predacon Megatron, the leader of the Predacons, tells Megatron that he has come to the past to deliver the Golden Disk to him, making Megatron realize that it’s the same thing that Galvatron wanted him to have. 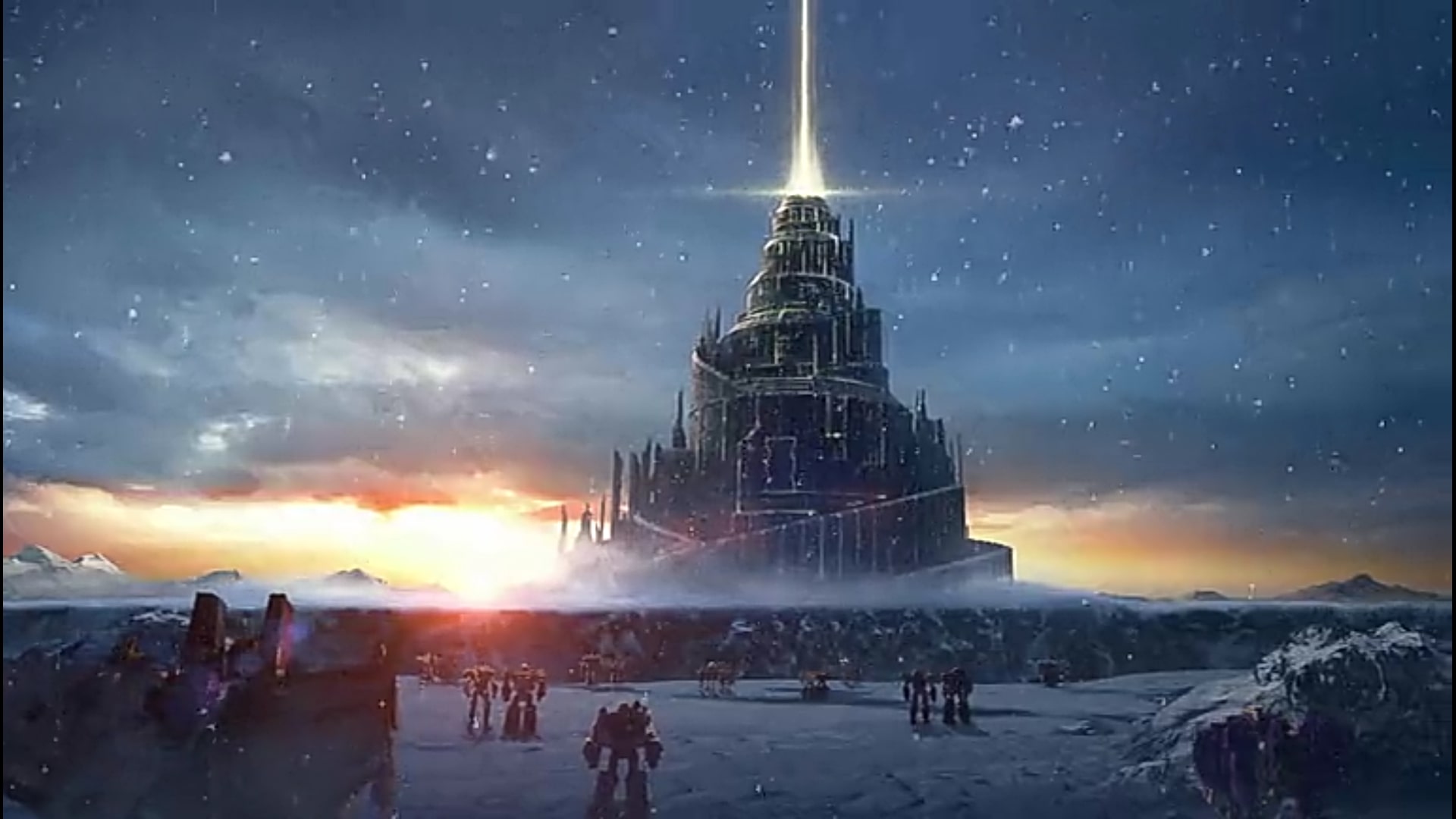 According to Predacon Megatron, the disk contains the complete memoirs of Megatron. All the secrets and strategies of the Decepticon leader are recorded on the disk, as well as all his battles from the past, present, and future. Meanwhile, Starscream forms a tentative alliance with the Predacon Blackarachnia, hoping to protect the future from the inherently destructive natures of the Megatrons.

Megatron combines the information the Decepticons gathered from Teletraan 1 with what he learns from the disk to find out the exact location of the AllSpark. Optimus Prime regains the Matrix of Leadership from Megatron and uses it to gain access to the AllSpark. He has a vision of Elita-1, who advises him that he must first lose everything if he wants to win everything. After coming out of the vision, he hands the Matrix over to Megatron, who tries to use it to take the AllSpark but ends up losing both as the Matrix never truly belonged to him.

Optimus Prime subsequently gets the AllSpark but realizes that it is dying. A battle takes place in which the Decepticons and Predacons are defeated and apprehended. In the season finale, Galvatron reappears with his mysterious ally, Nemesis Prime. They bring the Ark from the Dead Universe to a dying Cybertron. Both Optimus and Megatron must put aside their age-old enmity if they want to save their world.

No, the AllSpark doesn’t die. In episode 4, Sparks or life-forces of both Maximals and Predacons sacrifice themselves so that the AllSpark can live, but that is just a temporary solution. The AllSpark and Cybertron share a symbiotic relationship. Neither can survive without the other. The Autobots and their allies race against time to get the AllSpark to Cybertron before it’s too late. However, they are intercepted by Galvatron and Nemesis Prime. After returning to Cybertron, Optimus finds Elita-1’s transformer body. However, he realizes that he has to move and get the AllSpark to its temple before time runs out. Grief will have to come later. 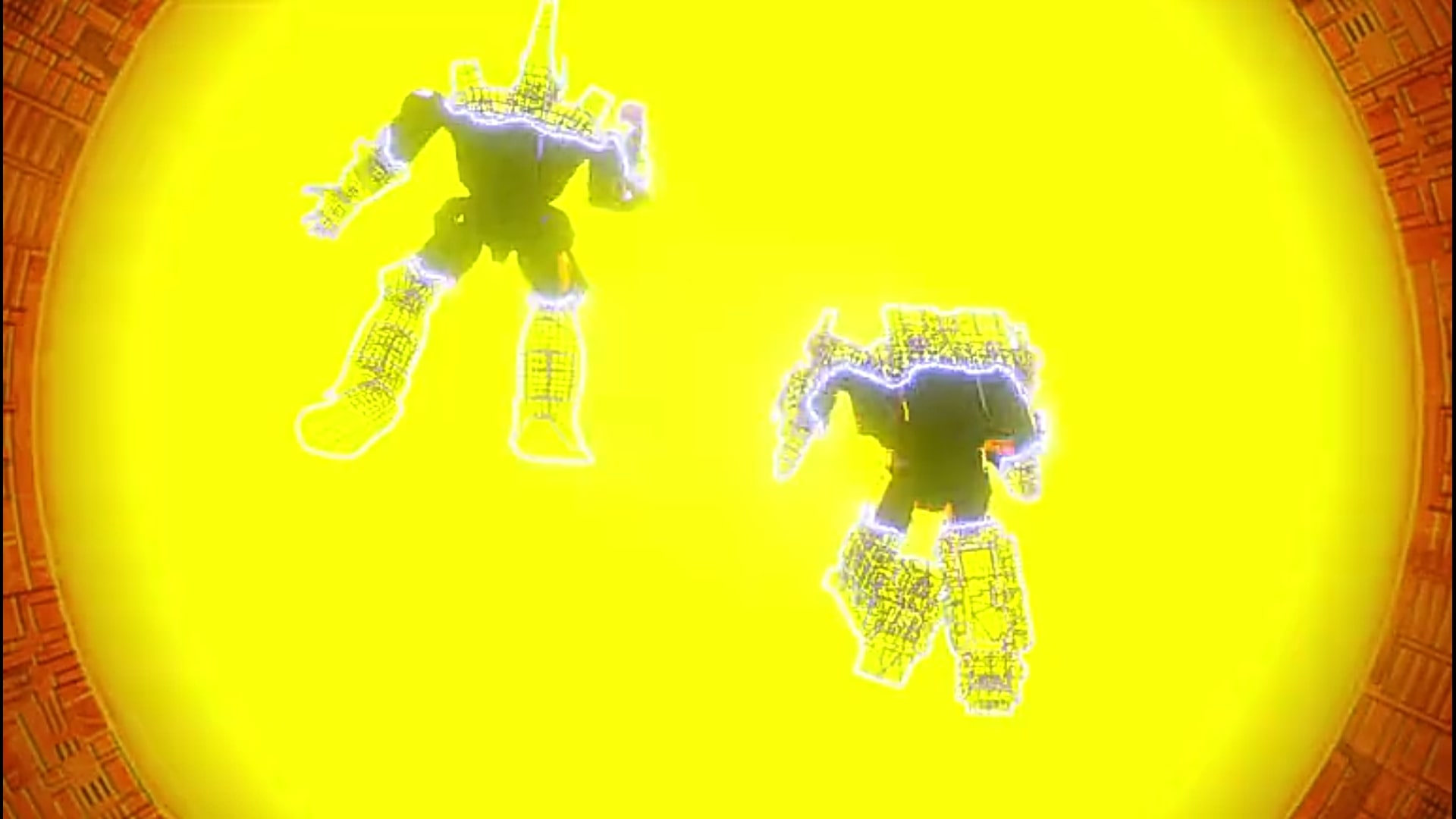 In the climactic scene, the Sparks of Elita-1 and hundreds of other Autobots and Decepticons appear and protect the temple from Galvatron and Nemesis Prime. When Bumblebee places the AllSpark on the altar, it stops shining, making him realize that it is already too late. It is then that the Spark of Elita-1 and the others decide to assimilate with AllSpark and bring it back to life. Elita-1 says her final goodbye to Optimus before immersing into the AllSpark. As the AllSpark starts to glow again, life returns to Cybertron as well.

Who Is Galvatron? Who Is Nemesis Prime?

Galvatron and Nemesis Prime are future versions of Megatron and Optimus, respectively. After their planet died, at some point, they became servants of the Unicron, the malevolent entity that embodies chaos and devours planets. Galvatron and Nemesis Prime have discovered that the AllSpark can be used as an effective weapon against Unicron, so they manipulate Predacon Megatron to deliver the Golden Disk to Megatron. Galvatron tries to convince Megatron to forget Cybertron and save his future self. 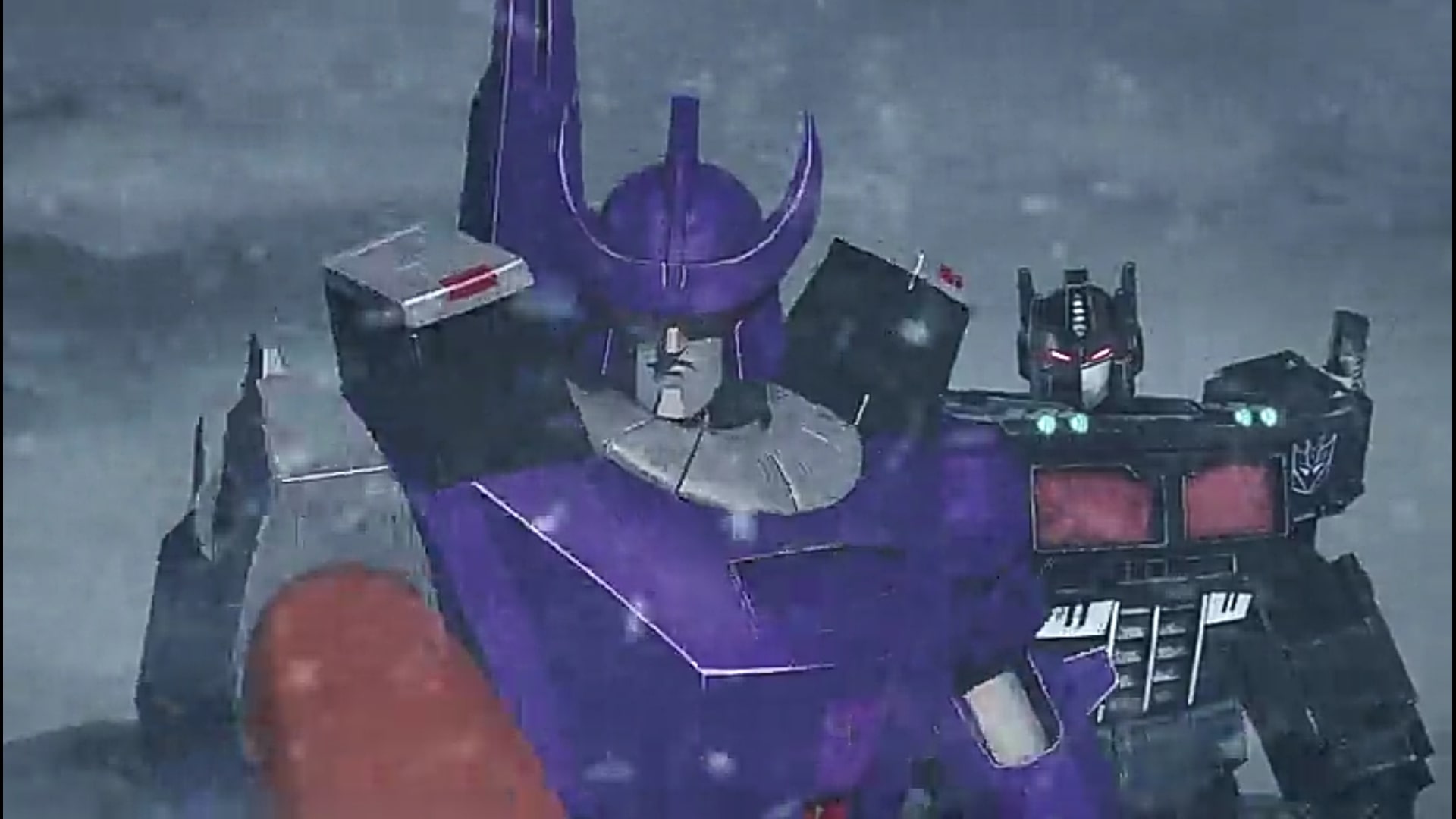 Starscream, who has seen and heard the Golden Disk and then spoken to Unicron, knows the danger that all the Transformers face. He urges Megatron to forget the enmity with the Autobots and work together with them to defeat Galvatron and Nemesis Prime. Meanwhile, the Maximals join forces with the Predacons and come to help Optimus and the Autobots. Ultimately, Megatron chooses Cybertron over his own future and joins the battle. While all the Transformers have secured the safety of their home planet, the ensuing peace seems quite fragile. Megatron leads the Transformers under him to a different part of the planet.

What Is Unicron Planning?

In the final scenes of the third chapter, Unicorn berates Galvatron and Nemesis Prime as he has to save their lives once more. He declares that their misadventure has given him an idea: he will become a king again. Considering Unicron has the power of a god, he can potentially remake a new future where the war between the Autobots and Decepticons is still going on. He might form an empire in the dead universe with the help of his two servants and then expand it to the rest of the multiverse. He will most likely serve as the primary antagonist in the next animated entry in the ‘Transformers’ universe.

Read More: Movies You Must Watch If You Like Transformers