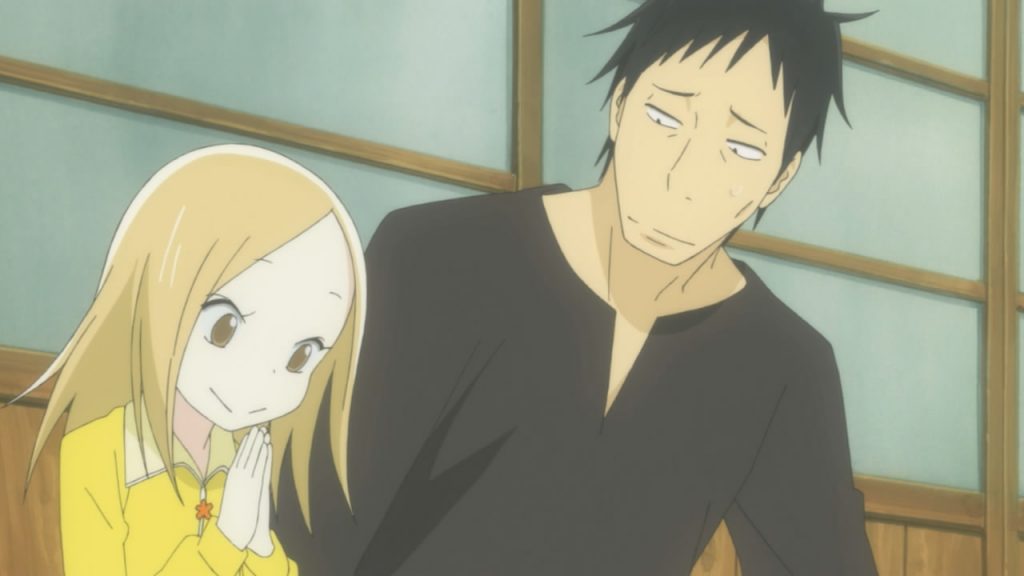 In the world of anime where fanservice, muscular shounen heroes, cute chibi girls, harems, nonsensical plots, and many other themes pass off as entertainment, ‘Usagi Drop’ offers something that is very different. The story starts off a little slow and instead of involving too much unnecessary melodrama, it takes a more mature approach towards the dilemmas of those raising a child. Certain aspects of it may only resonate with a Japanese audience but most of it will be relatable for anyone who has ever raised a child.

The storyline is as simple as it can be but it’s the characters of the show that bring life to all of it. The main protagonist of the ‘Usagi Drop’ is undeniably one of the most defined adult male leads of all time. Initially, the show portrays him as an individual adult who is complete in his own way and has habits and values that only concern him. But when the story moves ahead, instead of making him grow as an individual in any way, the main focus of the show goes on developing him through his relationship with his adoptive daughter. Apart from the two main characters, there are also many other supporting characters who are very well written. When I say “mature anime”, most viewers would probably assume that I’m referring to the violence or Ecchi of the show. But in this case, ‘Usagi Drop’ is one of those rare titles that completely changes the context of the word “mature” with its emphasis on realism. It is indeed directed towards a more mature audience but can be enjoyed by anyone who wants to watch a slice-of-life anime that is unlike any other out there.

Usagi Drop Season 2 Release Date: When will it premiere?

‘Usagi Drop’ season 1 premiered on July 8, 2011 and went on till September 16, 2011. Apart from this season, the anime also has a 4-episode side story version which aired from October 28, 2011 to January 27, 2012. ‘Usagi Drop’ also known as ‘Bunny Drop’ has been adapted from a manga that goes by the same name. Now the anime is quite loyal to the story of the manga but somewhere around the end, it brings in a lot of changes and has an entirely different ending. This approach does not usually work in favor of most anime as fans hate it when anime are not loyal to their source materials. But in this case, most fans were actually more satisfied with the ending of the anime and hated how the manga reached its conclusion.

I won’t say much about how the two come to an end but let’s just say that if you watch the anime first, then you probably won’t enjoy the end of the manga at all. Being a partially originally anime story worked out really well for ‘Usagi Drop’ but the problem with its approach is that now it cannot go back to adapting its source material. Because of this, season 2 just seems very less likely now. If you’re really curious about how the manga ends, then you should certainly read that as well. Maybe you’ll be able to appreciate the anime a lot more once you’re done doing that. If we get any news regarding the show’s renewal or ‘Usagi Drop’ season 2 release date, we will certainly update it here in this section.

You can watch ‘Usagi Drop’ on Crunchyroll and Amazon Prime with its original Japanese audio and English subtitles.

‘Usagi Drop’ revolves around a young man named Daikichi Kawachi who is a 30-year-old bachelor and has a very respectable job. But even then, he seems to lack a sense of purpose in life and often find himself aimlessly drifting from one place to another. When his grandfather dies, he decides to go back to his childhood home to pay his respect. Upon arriving he meets a little girl named Rin who, to his surprise, is his grandfather’s illegitimate daughter.

Everyone in the family treats her like an outsider and pretty much no one wants to take care of her now as they consider her to be an embarrassment to the family. This coldness towards the shy little girl really pisses off Daikichi and despite having no experience with raising a child, he decides to take her with him.

‘Bunny Drop’ explores the journey of Daikichi as he learns to raise a child as a single father and along the way, the warmth of fatherhood and having a close-knit family completely changes him as a man.

Daikichi Kawachi is the main protagonist of the show who decides to adopt Rin Kagi even after knowing that she is his grandfather’s illegitimate daughter. When everyone in the family ostracizes her, Rin shows a lot of heart and decides to keep her with him. Daikichi is a very tall and thin man who sports a short spiky hairstyle. Being about 30 years old, some signs of aging can be seen on his face such as sinking eyes and a few wrinkles here and there. He usually walks around in casual clothing and can only be seen in sharp formals when he is working. Before he decides to adopt Rin, he lives a very irresponsible lifestyle but still manages to be one of the best employees in his department. But soon after bringing Rin home, he starts to keep his apartment clean and even gives up on smoking.

Being new to the whole experience of raising a child, he is initially very confused and insecure about being a single father. He desperately seeks the help of those who are close to him at work and asks them if they would have any advice for him. When it comes to raising a child, he lacks even the most basic knowledge of being a guardian but with time, he slowly learns all the responsibilities that come with it. At his office, he even decides to change his department so that he can leave his office early and go back home to spend time with Rin. After some time, Daikichi really starts taking his role as a father very seriously and tries to create a proper balance between his work and family life. Meanwhile, even Rin realizes that he is putting in a lot of efforts from his side on for her wellbeing and tries not to be too demanding as a child.

Rin Kaga is a 6-year-old girl who is taken care of by Daikichi shortly after her father dies. She is a small thin pale child who has straight hazel hair and with light brown eyes. As a teenager, she appears to be more like her mother and turns into this beautiful young girl. Initially, Rin is very shy and often feels ostracized in the family as she ignored by almost everyone. For her age, she shows a lot of maturity and tries not to bother Daikichi with petty little things. She even starts cooking for him later on and even takes her studies very seriously when she reaches high school. Just like her mother, who was a very talented mangaka, she seems to have some great artistic abilities.

Read More in Anime Previews: Waiting in the Summers| Orange